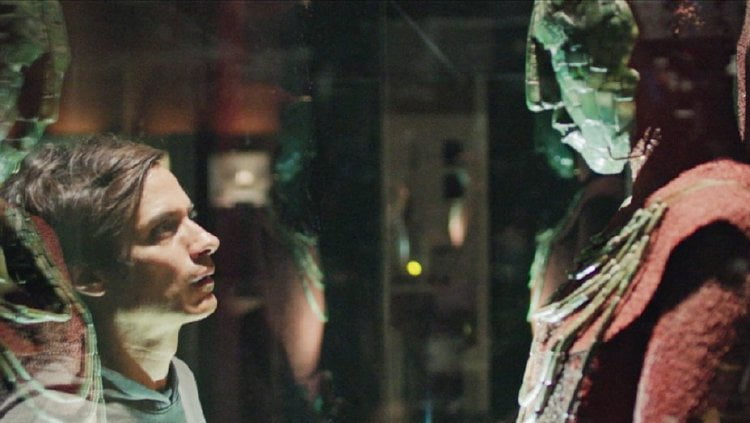 Juan (Gael Garcia Bernal) and Benjamin (Leonardo Ortizgris) are in their 30s, still live with their parents and never finish what they start – like veterinary school. Then, Juan comes up with an audacious plan to make a lot of money: rob the National Museum of Anthropology in Mexico City of priceless, culturally historic artifacts, but the fledgling criminals do not know what they, if successful, are in for in “Museo.”

'This story is a replica of the original' we are told via title credit before Benjamin Wilson (Leonardo Ortizgris) begins to tell us about his best friend and fellow veterinary school dropout Juan Nuñez (Gael García Bernal). Juan always said no one knew why anyone did anything, sometimes not even the person themselves, Wilson says, explaining Juan's distrust of historical records. The countryside plunder of the stone god Tlaloc for its installation in Mexico City's new National Anthropology Museum was an event Juan's father, Dr. Nuñez (Alfredo Castro), impressed upon his son when he was five, so there is a deep seated psychology behind Juan's adult plan to rob the "Museo." Cowriter (with Manuel Alcalá)/director Alonso Ruizpalacios made his feature debut four years ago with "Güeros," the tale of a young boy being thrust into the care of his older, irresponsible brother in Mexico City. That film reflected a variety of cinematic influences as does his latest, but Ruizpalacios has gained confidence and command in the intervening years, his storytelling and ability to shift tone now that of a seasoned filmmaker. Jumping off from the true story of the 1985 Christmas Eve heist at Mexico City's anthropology museum, one of the largest on record, Ruizpalacios creates a character study of a young man who has been unable to chart his course under the critical eye of a distant father while also exploring the tricky issue of the ownership of cultural artifacts. Bernal, still easily able to play younger than his forty years, creates a character of intriguing contradictions. We may not always like Juan, but Bernal makes his journey compelling, enabling an understanding of him. Our initial introduction to Juan and Wilson interacting tells us everything we need to know about them. Juan insists Wilson shoot a Rubik's Cube off his head with a bow and arrow. Wilson is nervous and resists, but Juan declares that this is the only way he will know that he can trust his long time friend. But when Wilson finally fires the arrow, Juan ducks, angrily accusing his friend of aiming at his head as his niece dances about calling him 'Shorty,' Juan's diminutive size a running family joke. With the holidays approaching, Juan is reluctantly assuming his deceased grandfather's traditional role as Santa for the kids, but he's also shocked Wilson by informing him he's moved up their heist from New Year's to that very evening. Wilson, who has a very different relationship with his own very ill father, objects, but, as usual, will capitulate. Before leaving, Juan upends his entire extended family by revealing the gift stash to the kids and letting them at it, his puncturing of the childhood myth relieving him of his duty. He slips out and picks up Wilson. Juan, who'd just spent his summer earning weed money by assisting the photographer who catalogued the museum's entire Mayan collection, knows exactly what to target. Better yet, cinematographer Damián García knows exactly how to shoot it, the boys feet magnified as the gingerly step through archeological models, his camera swiveling until they are upside down on screen, then casting their shadows on a wall as they approach the guard house then wriggle past below the partying guard's eyelines. Ruizpalacios adds additional drama with the classical score from 'Night of the Mayas,' gifted on cassette by Juan to Wilson in the car. García uses light and shadow, the boys located against the architectural maze of the museum floor by their darting flashlights. Glass cubes are removed with precision, solvents releasing wisps of smoke. It is a brilliant sequence, an homage to "Rififi" with its use of music and silence, darkness and light, closeup and long shots. But while Juan is now ecstatic over the immensity of his and Wilson's daring, he will quickly come to earth the next morning as news of the theft hits the airwaves, his act brutally condemned as a betrayal of his own people by newscasters and his father alike. Then there is the small problem that the artworks he has stolen, including the jade burial mask of Pakar, are so world renowned they are unfencable. Juan will go on a journey of the soul that takes him first to Palenque, then Acapulco, trailing the hapless Wilson and bag of priceless loot in his wake. As in his first film, a more innocent character observes the puzzling behavior of another male close to him while becoming complicit in that behavior, but Ruizpalacios' second film is richer than his first. Supporting players characterize different layers of Juan's psyche, Palenque guide Bosco (Bernardo Velasco) representing his ties to cultural past, British collector Frank Graves (Simon Russell Beale) his resentment of colonial influences and former soft core film star Sherezada Rios (Leticia Brédice) his link from irresponsible puberty to adulthood. Ruizpalacios utilizes cultural touchstones from the Torres de Satélite to cliff diving to symbolize aspects of Juan's reckoning. Grade:

Director and co-writer Alonso Ruizpalacios (with co-scribe Manuel Alcala) adapts the story of a real-life heist and, with his stars, makes it a character study about two guys, losers by most standards, who want their 15-minutes of fame. Juan is the mastermind of the “gang” and comes up with his foolproof plan to get stinkin’ rich. The filmmakers have all the details right, though names have been changed, and the Christmas Eve burglary itself is fast-paced and tense with its almost-got-caught vibe. But, while the heist is the important event, it is the aftermath and its effect on Juan and Benjamin that is the real story. The expected rewards – the 140+ pieces taken are worth many, many millions – turn sour very fast. You cannot fence, they learn, national treasures very easily. The post-robbery events unfurls in its steady, downward spiral for the pair as their dreams turn into a nightmare, and one of national revulsion, for the “gang.” Gael Garcia Bernal is solid as the man with the plan who had not really thought out that plan and Leonardo Ortizgris, his loyal friend since they were kids, goes along with it. Neither understands or is prepared for what is to come. Even knowing the outcome of their crime, both characters elicit sympathy and you wish them well, despite the sheer ignominy of their nationally impacting crime.