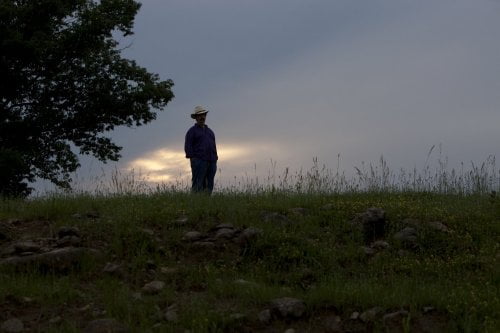 Since the 1950s, the tiny backwater town of Muscle Shoals, Alabama has been an epicenter of music with such diverse performers as Wilson Pickett, Aretha Franklin, Otis Redding, the Rolling Stones, Duane Allman, Tom Jones and many more flocking to the Fame Recording Studio to make their hits. Documaker Greg ‘Freddy’ Camalier celebrates owner Rick Hall’s contribution to all aspects of modern music over the decades from his home town of “Muscle Shoals.”

On the Tennessee River, which the Native Americans called 'the singing river,' is a place not only of musical inspiration, but one where black and white artists collaborated in equal measure as the Civil Rights movement was just taking hold. Legendary R&B and rock and roll artists from Aretha Franklin to the Rolling Stones recorded there, all because a man named Rick Hall pulled himself out of a hardscrabble life to create a unique sound in the recording studio he built in "Muscle Shoals." As a filmmaker, director Greg 'Freddy' Camalier doesn't always make the right choices. He has so much information he wants to share that some of it is awkwardly inserted, disrupting the flow of his film. He uses Bono without ever establishing any connection between U2 and Muscle Shoals and stages members of the Swampers (Rick Hall's studio musicians who split off to found their own studio) in fashion shoot groupings once too often. But his rambling love letter to a unique American sound is not only full of the beautiful landscapes and small town Americana which inspired it, it has an enveloping, beautiful heart. Camalier sets up his film with nature shots interspersed with relaxed talking heads like Jimmy Cliff, who describes a 'feel of energy,' Keith Richards, who clearly would have liked to return there for 'Exile on Main Street' (but couldn't because of his immigration status) and Bono, who makes an interesting observation about the best recording magic happening near rivers (Liverpool's Mersey, the Mississippi). Then he begins to weave in Rick Hall's story. The man who literally grew up dirt poor and was traumatized when his mother left went on to forge a successful career in music, but had a serious setback when his first wife died in a car accident. Pulling himself back once again, this time from alcoholism and homelessness, he created Fame Studios and began putting out one hit after another with a group of white session musicians whose sound was always mistaken for black. Hall teamed up with NYC's uber producer Jerry Wexler of Atlantic Records and his studio really took off, with Wexler sending artists like Wilson Pickett and Aretha his way, but a flap with Franklin's husband caused a split, despite Hall having 'found' her sound. Hall rebounded allying with Leonard Chess, who brought him Etta James. Duane Allman created Southern rock there with his slide guitar. But just as Hall cemented a deal with Capitol, the Swampers defected, and Camalier bridges over to their studio's history, which began with a shaky start when they couldn't hold onto Leonard Skynard, then went into full throttle with artists like Traffic and Jimmy Cliff, who introduced reggae from the heart of Alabama. (Their Skynard recordings were eventually used on the 'First...and Last' posthumous album). It's a bit odd that Camalier treats the cornball 1970 Clarence Carter single 'Patches' with the same gravitas as the music which has lasted and although we do hear from Swampers members, we never get to know them on the same level as Hall. Camalier does go out joyously, however, the rift between Hall and his former protegees apparently mended as they gather together to record with Alicia Keyes back in their original 'home.' Stay through the end credits to hear how the Swampers got their name, memorialized in Skynard's 'Sweet Home Alabama.'

I thought I was familiar with all of the major music centers across the country from Nashville to Detroit and LA but I was surprised to learn about the star-making empire and its distinctive clientele and style, the Muscle Shoals Sound, which grew up in that sleepy little town in Alabama. That is, “surprised” in a good way as Rick Hall and his good ole boy band, the Swampers, produce the records and play the music backing up many of the greatest music artists of our time. Fame Recording came to prominence as a music Mecca at the height of the Civil Rights movement. This is remarkable because, at that time in the south, especially Alabama, race lines were drawn and white versus black violence arose in many southern cites. But not in Muscle Shoals at Fame Studio. There, the all-white local members of the Swampers are there to make music, regardless of the performers’ race, color or creed. The eclectic talents of the band (also called the Muscle Shoals Rhythm Section) fit any and all sizes of music and musician. These guys performed R&B, Country, rock ‘n’ roll and pop like masters and even introduced Reggae to America’s heartland. The band are truly gifted musicians and it is heartening to hear their story and their music, thanks to helmer Camalier. If you like America’s musical treasures and those from across the pond influenced by those treasures, you are in for a treat. “Muscle Shoals” has a couple of pacing problems along the way but first-time helmer Camalier may falter a bit but does not fall. This is the little known story of a music machine that created some of the past decades’ best music from its many renowned artists. I learned something new and enjoyed the experience.