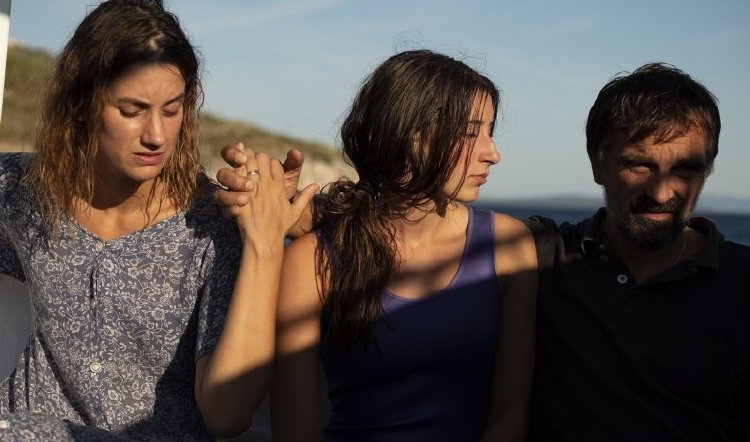 17 year-old Julija (Gracija Filipovic) lives in a natural paradise on a Croatian island, land which her father Ante (Leon Lucev) is pitching to his old employer Javier (Cliff Curtis, TV's 'Fear the Walking Dead') as the perfect spot for a resort.  Ante and his wife Nela (Danica Curcic) hope to sell in order to move to Zagreb, but Julija views the millionaire businessman, who flirts with both her and her mother, as a means to free herself from her oppressive father in “Murina.”

Cowriter (with Frank Graziano)/director Antoneta Alamat Kusijanovic’s Camera d’or winning feature debut recharges the coming-of-age story with multi-generational sexual heat and a constant threat of danger in a sun-splashed, Adriatic setting.  Before the man Ante describes as ‘god on earth’ arrives, Julija dutifully accompanies her father to spearfish for the titular eels before returning to her room where she watches vacationing teenagers flirt on a yacht below her window.

When she’s not capturing the sparkling sea and dramatic underwater scenes, cinematographer Hélène Louvart (“The Lost Daughter”) uses angles like these to add weight to the viewer’s point of view – Murina will look down again from a height at a very different type of flirting (and we will gaze up at her, a statuesque sea nymph in an aqua one piece).  There will also be tight spaces promising danger, like the rocks Ante recklessly pilots a boat through or the underwater crevice Julija risks for an escape.

Then Javier arrives and he appears to be everything Ante is not, appreciative of the women’s beauty, encouraging Julija to expand her dreams and think of going to Harvard.  Javier’s attentions make Julija bolder and Ante angrier.  Julija tells Nela that Javier is obviously in love with her and that they should leave with him, but the older beauty knows better.  Afraid that his daughter’s rebellious behavior will sink his business deal, Ante does what she’s been accusing him of wanting to do, literally locking her up in a boathouse.  The man needs to watch his back.

Kusijanovic counters sensuality with tension throughout, accentuated by the tautly vibrating violins of “Loveless” composers Evgueni and Sasha Galperine.  The overlapping interplay of two sets of three, the dysfunctional family and the flirtatious love triangle, is beautifully acted, Filipovic wordlessly displaying mercurial emotions between the extremes of Lucev and Curtis.  “Murina” is a bold and beautiful expression of one young woman’s bolt for freedom.

Kino Lorber released “Murina” in select theaters on 7/8/22.  It is available to Buy or Rent early on Kino Now 9/6/22 and on All Major Digital/VOD Platforms 9/20/22.  It will also be featured in Boston's Museum of Fine Arts' Boston Women's Film Fall Festival Showcase - click here for information.