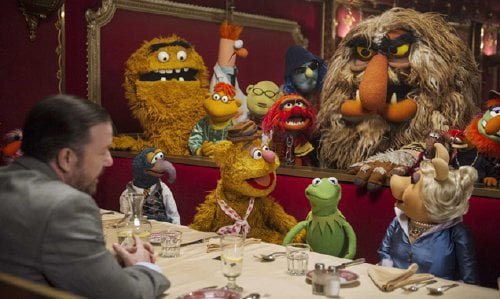 The Muppets are back together and an international talent agent, Dominic Badguy (Rickie Gervais), wants to bring the gang on a world tour. Kermit and company jump at the chance to go to Berlin, Madrid, Dublin and London. But, things are not as they seem when the world’s most dangerous frog, Constantine, breaks out of a Siberian gulag with a nefarious plan to steal the Crown Jewels of England and frame the “Muppets Most Wanted.”

This is the second time out of the gate for director-writer James Bobin and the second time he has worked with the lovable Muppet crew. It is his first time scripting a feature film (with Nicholas Stoller) and here in lie the rub. “Muppets Most Wanted” is a complex effort, storytelling-wise, and the filmmakers get mired in details that cannot sustain the movie’s interest for its nearly two hours. Things start out actually quite hilariously with one-liners flying fast and furious and getting some honest to goodness belly laughs. But, at the hour and eight minute point, it loses steam – I inwardly groaned when I saw that I still had 45 minutes to go. Besides the caper and the frame up story, which should have been enough, the writers add a parallel tale about an Interpol cop, Jean Pierre Napoleon (Ty Burrell), and CIA agent Sam the Eagle. Their mission is to thwart Constantine’s nefarious plans but most of their time on screen is spent discussing who has the biggest badge. Then, there is the story where Kermit is thrown into the Siberian gulag after being mistaken for Constantine and his subsequent rescue attempt by Fozzie Bear, Walter and Animal. Any one of the three tales could have been a film unto itself but all three in one movie is too much.. Once the several story threads lose momentum (about the time Tina Fey enters the picture as gulag warden Nadya), I spent most of the rest of too-long movie picking out the many celebrities that appear in cameo – and there are a lot of cameos, like Usher as an usher and James McAvoy as the UPS guy. It reminds of the old “The Muppets Show” where people beat down the doors to work with the lovable puppets. Unfortunately, these celebs are just icing on an overblown cake. Epic adventures should be two hours long. Comedy features should be short and sweet and “Muppets Most Wanted” could have been just that. If Bobin and company had reigned things in and kept a tighter focus on one, not three, plots…but they did not.