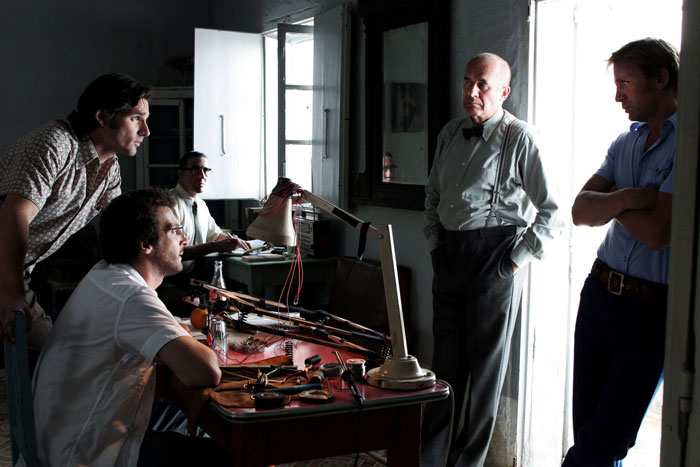 Avner (Eric Bana, "Troy") is an Israeli Mossad agent awaiting the birth of his first child when he is called to the prime minister's office, served coffee by Golda Meir (Lynn Cohen, "The Station Agent") and given one day to decide if he will leave his wife and go underground to lead an assassination team. His target is eleven members of the Palestinian Black September group in retaliation for the slaughter of the eleven Israeli Olympic athletes in "Munich."

Anyone who was old enough remembers that terrible 21 hours during the 1972 Munich Olympic Games when members of the Palestinian terrorist group, Black September, stormed the Israeli team’s dormitory killing or taking hostage 11 Israeli athletes and coaches. At the end of that fateful day the remaining Israelis were gunned and grenaded to death. If you asked the question “What happened after?” then Steven Spielberg may have an answer for you in “Munich.” This is another of mega-director Spielberg’s “noble” films, such as “The Color Purple” and “Schindler’s List,” as the helmer tackles the touchy subjects of assassination, revenge and national honor. The screenplay, by Tony Kushner and Eric Roth (based on the book “Vengeance” by George Jonas), tells the story of Avner (Eric Bana), an ex-Mossad agent and bodyguard to Israeli Prime Minister Golda Meir (Lynn Cohen), recruited to head a top-secret, death-dealing undercover mission: find and kill the 11 Palestinian ringleaders responsible for masterminding the Olympic slaughter. Joining Avner is an assembly of assassins from all walks of life: tough, deadly driver Steve (Daniel Craig); prim, well dressed Carl (Cirian Hinds); toy-maker turned bomb-maker Robert (Mathieu Kassovitz); and, master forger Hans (Hanns Zischler). This eclectic group is controlled, firmly, by their upper-level handler, Ephraim (Geoffrey Rush), who insists on secrecy and receipts. Armed with an unlimited war coffer Avner and his team move from city to city – from Tel Aviv, Beirut and Athens to Geneva, Paris, London and New York – tracking down the perpetrators of the Munich massacre. Avner seeks the help of Frenchman Louis (Mathieu Amalric), who, for enough money, will find the Israeli’s targets. Louis is the right hand man of his father, Papa (Michael Lonsdale), who controls a shadowy international underworld where information and loyalty go to the highest bidder. Papa and his son maintain a code of (relative) honor where they can be bought but never bribed. The Israeli hit team takes the Frenchmen’s intelligence and hatch elaborate plans to take out the bad guys. Munich” makes no bones about the Israeli decision, made at the highest levels as shown early in the film, to kill the Munich masterminds. It is a cold and calculated choice that would make the statement to the world that Israel will retaliate if its safety and national honor are at stake. The filmmakers humanize this decision by having Avner, a loving husband and father-to-be who takes on the deadly job as his duty to his country, struggle with the consequences of his mission, especially when innocents are killed. The story tries to make an overture to the Palestinian plight when Avner and his crew must share a safe house in Athens with a group of Arab terrorists. This hands-across-the-water gesture makes its obvious point when Steve (Craig) battles with a stubborn Arab opponent on the selection of a radio station. Peace is had when both compromise and they find a station that makes them both happy. This kind of heavy-handed symbolism permeates Munich. For a film that deals with globe hopping assassins using guns and bombs to kill their prey, there is little excitement – except when manufactured – in the story. One obvious bit involves planting a bomb in a high-ranking Palestinian’s home and the man’s daughter. It has been done so many times before that I wondered, to myself, when the daughter was going to be put in danger long before the tension-fraught scene . This sort of button pushing by Spielberg and company is one of the several detractors in “Munich.” The episodic action/assassination attempt sequences lack any real flow as the killers, almost willy-nilly, hop from one exotic capital to another in search of national revenge. Other problems include casting Eric Bana as Avner. There is nothing in the man that invokes empathy, even in those “touching” moments with his pregnant wife, Daphna (Ayelet Zurer). The inner torment the man suffers over his mission is augmented with chronological flashbacks to the fateful September day. Again, it is way too obvious as it ends with a sex act juxtaposed with the final moments when the Palestinians lob grenades and open fire on the helpless Israeli athletes and coaches. Talk about having a climax! The international cast is relegated to two-dimensional characters – Avner notwithstanding – but populated with a solid progression of character actors. The hit team is well played by the future James Bond, Daniel Craig, my personal favorite Cirian Hinds, Hanns Zischler, and filmmaker Mathieu Kassovitz but they never change from the personas you meet in the beginning of “Munich.” Geoffrey Rush is one-note as the gruff mission controller. Michael Lonsdale and Mathieu Amalric are standouts as the shady father & son team who supply info to the Israelis. Ayelet Zurer is little more than a symbol of another life that Avner, because of his emotion-draining mission, has, possibly, lost. Little time is spent in building any kind of emotional bond to these characters. Techs are first-rate, as one would expect in a Steven Spielberg film. Long time Spielberg collaborators, lenser Janusz Kaminski and composer John Williams, lend their exemplary expertise to the proceeds, as does production designer Rick Carter, who captures the international period feel. But, these solid techs can’t help if the story lacks emotional involvement and the players aren’t fleshed out to 3-D beings. Munich” may have an answer to the question posed earlier but I’m not sure, 33 years later, if anyone is asking. It is a well-crafted but ultimately lifeless story that fails to garner the viewer’s involvement.