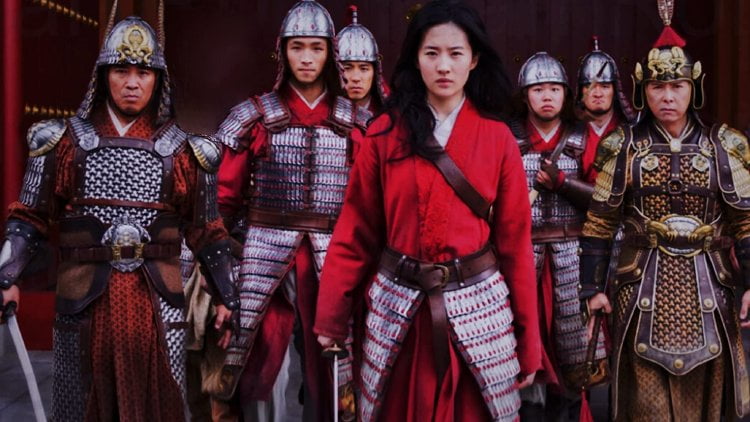 When Böri Khan (Jason Scott Lee, "Dragon: The Bruce Lee Story") and the witch Xianniang’s (Gong Li, "Raise the Red Lantern") Rourans seek vengeance against the Chinese Empire by attacking its garrisons, Commander Tung (Donnie Yen, "Ip Man") travels to villages to conscript one male from each family into the Emperor’s Imperial Army.  Wishing to save her aging, veteran father Zhou (Tzi Ma, "The Farewell"), a young woman who strains against the life laid out for her steals his sword and his armor and takes his place in disguise.  If found out, she will be expelled and bring shame to her family, but the Emperor (Jet Li, "Fearless") will come to honor the heroics of “Mulan.”

Why is it that so many of Disney’s ‘live action’ remakes look so artificial, as if they’ve been mostly animated themselves?  So far, while most have been OK, the only one that really worked was Jon Favreau’s “The Jungle Book.”  "Whale Rider's" Niki Caro directs the latest and while its story of female empowerment is great for kids, the battle action quite breathtaking (is that wire work or CGI or a combination?  Disney oddly offered no production notes for this one…) and the costuming (Bina Daigeler, “The Zookeeper’s Wife”) impressive, it is once again no match for the original animation.  Screenwriters Elizabeth Martin and "Rise of the Planet of the Apes" writers Rick Jaffa & Amanda Silver correct the original’s history, replacing the Huns with the Rourans, but they lose Mushu the dragon, the cricket and Mulan’s pet dog, instead giving us a phoenix which is garishly realized in fuchsia, orange, yellow and purple, looking more like a kite than a mythological bird.

The amusing animals’ exploits are instead foisted on young Mulan, who upsets her village by chasing chickens over rooftops and through a temple, breaking a carved phoenix’s wing along the way.  Dad is indulgent, but mom Li (Rosalind Chao, "The Laundromat") is intent on pushing Mulan into her expected path.  Jump ahead a few years and “The Forbidden Kingdom’s” Liu Yifei takes over the role as we see her being painted and adorned to meet the village matchmaker where her attempt to shield her sister from a spider results in an impressive display of agility when a teapot flies into the air but fails to mark her as marriage material.

Mulan tries to keep a low profile during training, although fellow soldiers notice her ripeness when she fails to shower with them.  Attention is called when she scuffles with the handsome Honghui (Yoson An, "Mortal Engines"), but when she outwits him in a more formal head-to-head, Tung wonders why she has hidden her powerful ‘Chi.’  Trying to confess to him that she has failed the final part of the Imperial Army’s oath of ‘Loyal, Brave, True,’ she is cut off, instead told that the Commander intends to match her with his daughter when the war ends(!).

While the battle sequences are amazing, both on foot (Mulan runs along the sides of fortress walls) and horseback, we can never be sure if what we are seeing has been accomplished in camera or not.  Backgrounds generally look artificial.  Effects which turn Xianniang into a bird of prey are lovely, as is the ageless Gong Li, her white ‘painted mask’ giving her a supernatural appearance.  Liu Yifei is fine in the lead, although it should be noted that she backed police during Hong Kong’s democracy protests, an odd stance for a Disney heroine if not for Chinese profitability, a situation which also was cause for expunging the Rourans’ history here.

The Emperor of China has decreed that one man from every household must serve in the Imperial Army to protect the kingdom from the Northern invaders. But, elderly Hua Zhou (Tzi Ma) has only his daughter so he must serve in the army himself. His eldest daughter (Liu Yitei), though, has very different plans - masquerade as a man and take the place of her beloved father in “Mulan.”

I cannot believe that it has been 22 years since the Disney animated version of Mulan’s story was brought to the screen. This time, the Mouse House gives the story a live action turn to the tune of some $200 million and few theaters to show it. So, as has been the way these last six months, I watched this latest version of “Mulan” from the comfort of my own home – which, I have to admit, I like doing.

If you saw “Mulan” in its animated form back in 1998, you will be entirely familiar with the story reprised in the new live-action version – with the exception of one main character in the first, Mushu (voice of Eddie Murphy), a tiny dragon and Mulan’s diminutive sidekick. Other than that, one is pretty much a shot-for-shot of the other, but live instead of animated – oh, wait, there is a boatload of CGI (AKA, animation) throughout the new “Mulan.”

There is an element of Joan of Arc to Mulan’s story, except, she is not burned at the stake in the end. For those who have not seen the first one, this version shows the big buck spent on it and Disney is doing some creative distribution to get back some of those bucks spent. That said, “Mulan” is good storytelling, if a little generic, with a solid femme theme that will entertain. It has been a long time coming, so expectations run high.