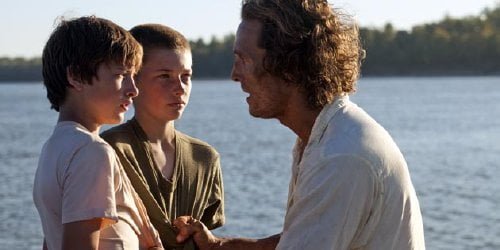 When Neckbone (Jacob Lofland) spies a boat aloft in trees on an island in the Mississippi River, he and his best buddy Ellis (Tye Sheridan, "The Tree of Life") boat out to explore it and discover that someone is living there. The stranger (Matthew McConnaughy, "Magic Mike") tells them that he's wanted for murder and is planning on meeting his lover, Juniper (Reese Witherspoon), and making his escape. He asks for the boys help and the 14 year-olds agree to assist and protect "Mud."

What a weird hybrid of a picture "Mud" is. The press notes wave 'The Adventures of Huckleberry Finn' influence around (and director Jeff Nichols says it was required reading for his two young stars), but the film feels more like a reverie on the impossibility of adult romance while a young boy keeps hoping for his shot at it. All set in a world where ways of life are changing, like a parallel to "Beasts of the Southern Wild" without the overt poetry. There's as much of 'The Go-Between' here as there is 'Finn.' This isn't what I was expecting as the followup from the writer/director of "Take Shelter," but it certainly has a more satisfying, if somewhat unrealistic, conclusion. The movie is also a coming-of-age tale. Ellis helps his dad (Ray McKinnon, "Footloose") deliver the fresh fish he catches from their houseboat on the Arkansas side of the Mississippi. Senior tells him that their days living there may be numbered, though, as the houseboat was Ellis's mom Mary Lee's (Sarah Paulson, TV's 'American Horror Story') inheritance and she wants to move into town. If she leaves, the River Authority will demolish the house. Fourteen year-old Ellis also has his eye on an older girl at school and May Pearl (Bonnie Studivant) gives him reason to believe she's his girlfriend after he steps into an argument to defend her, punching a senior. So when he hears Mud describe Juniper and how much he loves her, then later sees the young woman at the local Piggly Wiggly, his romantic notions make him determined to reunite the lovers. Mud, sporting greasy curls, a chipped front tooth and scrolling tat work, eventually tells the boys he's wanted for murder - of a man whom Juniper fell in with who pushed her down the stairs when she was pregnant. When he decides he'll repair the boat, reneging on his initial deal with the boys, Neck asks for his gun in return. The two boys begin ferrying over supplies, but when Ellis contacts his mysterious neighbor, Tom Blankenship (Sam Shepard, "Days of Heaven"), at Mud's behest, the man tells Ellis to steer clear of him. Meanwhile Juniper is under surveillance by Carver (Paul Sparks), the murdered man's brother, and when the man's daddy (Joe Don Baker) rides into town, Mud has more to worry about than local law enforcement. "Mud" starts slowly, almost sleepily, Nichols taking his time setting up his environment and characters layer by layer. Several early signposts, like Ellis's fear of snakes, Mud's 'protective' shirt and Neck's Uncle Galen's (Michael Shannon, "Take Shelter") reflections on the Mississippi all come into play during the film's explosive climax. The film's strongest theme, however, is disillusionment in love. Ellis's parents have reached a serious crossroads, the boys witness a woman walk out on Galen, May Pearl proves opportunistic and insensitive and Tom has a very different story to tell about Juniper. And yet Nichols leaves us with Ellis encouraged by the friendly wave of a new neighbor. The filmmaker paints women as pragmatic and men as the romantics. The cast is terrific. McConnaughy (who seems coated in sweat and oil in every role he plays) makes Mud a mythical hero rather than desperate criminal. He's obviously a man of little prospect, but capable of painting a future with words. He only shares one scene with Witherspoon, but it's a silent stunner. The boys are hardscrabble kids with a sense of adventure, Lofland the down-to-earth one, countered by Sheridan's sensitive imagination. Witherspoon creates a character that falls somewhere in between the two descriptions of Juniper given by the men who know her, aided by the way Nichols lets his story unfold. Shannon provides laid back comic relief as an oyster diver with a homemade deep sea helmet which must seen to be believed while McKinnon's Senior is clinging to life by his fingertips. "Mud" is a deceptively slow-building film. Like its author's views on women and men, it is full of both hard life lessons and the magical from the very beginning.