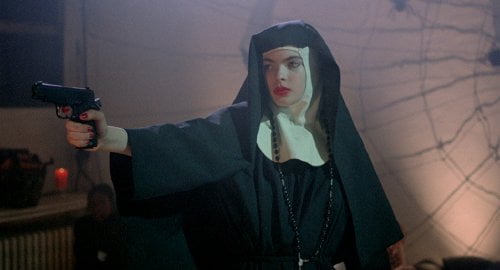 Thana (Zoe Lund) is a totally mute seamstress working in New York City’s garment district. While walking home from work, she is assaulted and dragged into an abandoned building and brutally raped. Meanwhile, someone is breaking into her apartment and a new danger, and another rape, is awaiting her arrival home. This will push Thana over the edge and make the silent woman become “Ms.45.”

Mute and painfully shy, Thana (Zoë Lund) is a garment district seamstress who draws the male gaze despite her dowdy convent school girl apparel. On her way home from work, she's heckled. After grocery shopping, she's dragged into an alley and raped. After barely making her way back to her walk-up apartment, she locks herself in, only to discover an armed intruder who rapes her yet again. This time, though, Thana slays her attacker (with a glass red apple - I heart NY!), but the violence done her unhinges her mind and she takes to New York City's streets as a female avenger, "Ms. 45." Abel Ferrara's second feature was released in 1981, but it's pure 70's exploitation. Starring model Zoë Lund, who went on to cowrite his "Bad Lieutenant" and died of a cocaine overdose in 1999, "Ms. 45" followed in the footsteps of such films as "Death Wish" and "Lipstick" but Ferrara's looney, over-the-top sensibilities make this one stand on its own. He may copy Woody Allen's Brooklyn Bridge shot from "Annie Hall," but the film appears influenced by DePalma's "Sisters" and "Carrie." This is one of those amateurish, low budget movies that seems to have worked almost in spite of itself. Take some of the dialogue, for example. When nosy, flamboyantly garbed neighbor Mrs. Nasone (photographer and Andy Warhol muse Editta Sherman) hears Thana come in, she follows her, yelling 'You ran up the stairs like a phantom!' (It helps that Sherman plays her like "Rosemary's Baby's" Ruth Gordon on a mixture of helium and downers.) At another point, Thana's told 'You are much too beautiful to be a model.' Huh? on both, but the hilarity factor is off the charts. When Thana decides she must get rid of the body of her 2nd rapist, we just know Mrs. Nasone's dog Phil (Bogey) will be waiting at the door when she brings her first garbage bag out, but who would expect Thana's attempted hit on the pooch (by literally playing in traffic!). The more aggressive Thana's behavior gets, the more glamorous her appearance becomes - at one point we watch her apply red lipstick for what seems like two full minutes, a trippy interlude. Despite the film's low rent look, Ferrara has an eye for detail and style. In addition to that symbolic murder weapon, Thana's apartment contains a ceramic lamb lamp and her snow white nightgown hangs next to a rose red bathrobe. Thana's foregrounded against a mens room door, its sign like an angry thought bubble over her head. When she shoots up a photo shoot, blood splatter's brilliantly against the photographer's (who could be the inspiration for 'The Simpsons's Disco Stu) white background paper and the climatic Halloween party features a strobe light on Thana as a gun-pointing nun against a decorative spider web. The film is also an enjoyable time capsule, sending us back to a much grittier Big Apple - it's hard to imagine bus lockers existed once, let alone the fact that 50 cents could rent one for a day. "Ms. 45" is a guilty pleasure, cheesy camp and a true cult item. See it on the big screen at Cambridge's Brattle Theater.

Death Wish gets Dressed to Kill in this 1981 exploitation film by Abel Ferrara that is about rape, revenge and the story of how one young woman is pushed over the edge of sanity and becomes a man-hating killing machine. I had my doubts early on in the film with its almost amateur air. But, once the action begins – with Thana being raped twice in one day – Ferrara pulls out all the stops as the film’s heroine strikes back. At first, it looks like Thana is going Charlie Bronson on those bad men who do women harm – like a pimp beating his ho. Soon, though, she drops the vigilante façade and start stalking and enticing men, good or bad, to their untimely demise. The steady spiral to insanity is coupled with Thana’s wardrobe that goes from plain Jane in the beginning to sexy vamp before the ultra-violent finale. “Ms.45” is a product of a filmmaker plying his trade in NYC when the streets were still mean and crime running rampant, pretty much about the same time as “Death Wish (1974)” – well before Mayor Rudy Giuliani cleaned up that one-horse town. Ferrara captures the seediness of the city as Thana tempts her marks with her large, red-lipsticked mouth, come hither eyes and sexy wardrobe. One notable scene, in the notoriously dangerous (at the time) Central Park, pits lone Thana against five thugs circling her like Indians surrounding a wagon train. “Ms.45” may be over 30 years old but it has a timelessness to it that will appeal to the fans of exploitation movies even today. I had a few doubts going in but ended up having a hoot of a good time.