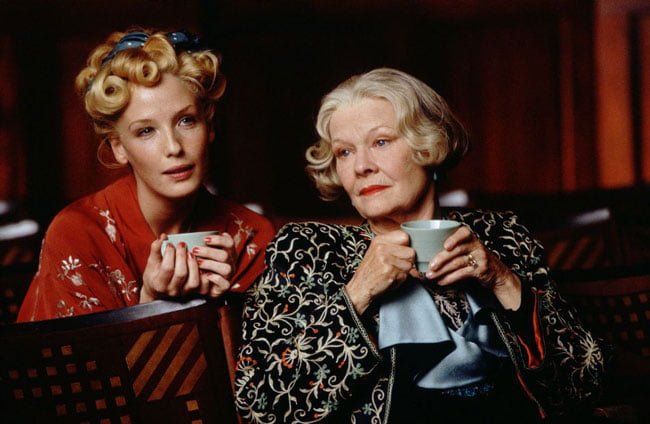 When Laura Henderson (Judi Dench, "Pride & Prejudice") is widowed in her sixties, she cannot settle down with the embroidery and charity work suggested by her friend Margo (Thelma Barlow as Lady Conway , BBC's "Coronation Street"). But her friend's nudging about having the liberty to buy things and take lovers prods Laura to enter show biz, buying the East End's old Windmill Theater, then hiring the dashing Vivian Van Damm (Bob Hoskins, "Beyond the Sea," "Unleashed") to manage the production that "Mrs. Henderson Presents."

The British are overly fond of a type of film I think of as 'snickering at seniors acting scandalously.' This genre became popular with "The Full Monty," but went on to turn into such twee offerings as "Waking Ned Devine," "Saving Grace" and "Calendar Girls." Yet while "Mrs. Henderson Presents" falls into both this category and the WWII-era British theater troupe genre ("The Dresser," "Being Julia"), director Stephen Frears ("High Fidelity," "Dirty Pretty Things") and his mix of prestigious and up and coming players make this an enjoyable, quality outing. Any Oscar talk, however, is based on pedigree, not depth or daring. Writer Martin Sherman ("Bent," "Callas Forever") bases his story on the famous Windmill Theater in London's Soho, the only theater which never closed during the Blitz. It also broke ground with its saucy mix of musical revue and nude tableaux, which, as presented here, was invented by its progressive proprietress as a compromise when Lord Cromer (Christopher Guest, "Best In Show") decreed her proposed brand of British Folies Bergere girls could be nude if they did not move. But mostly "Mrs. Henderson Presents" is about the relationship between the widow and her manager, one of those classic artistic pairings of people who battle constantly while harboring deep feelings for one another. In Laura's case, Mr. Van Damm is the potential lover Margo suggested, and she is so shocked when he introduces her to his wife after a performance (not having known of her existence) that her rudeness causes a long term breach which effectively bans her from her own theater. For Vivian, Mrs. Henderson is a frivolous, anti-Semitic woman of inherited wealth who ends up surprising him with her amateur contributions and her own, personal motivation to keep their 'Revudeville' running. Her reason will inspire one of the film's major, if late coming, subplots, which results in tragedy for one of their own. Sherman's dialogue gives the actors some great repartee. Mrs. Henderson rejects Van Damm's dubbing the dancing girls the Millerettes because proper English would dictate calling them the Millettes ('sounds like a disease!' he retorts). Dench gleefully spouts 'shocking' rejoinders when sparring with Cromer, the government appointee who defines theatrical boundaries and genteelly refers to a woman's 'parts' as 'The Midlands.' She looks like the proverbial cat who ate the canary catching Van Damm in the buff and using the occasion to confirm his Jewishness. Barlow is yummily plummy applying her deceased second husband's military tactics as strategies for Henderson's retaking of her theater. Dench keeps a lid on her performance, not pushing the comedy over the top, so that behavior that would seem cutely impish in another has the more appealing sparkle of subverted refinement. Hoskins, transformed with aid of hair and costume into a sleek figure, is essentially Dench's straight man. They're an odd pairing at first glance, but the two have a frictional chemistry. Kelly Reilly ("Last Orders"), who made the small role of Caroline Bingley memorable in 2005's "Pride & Prejudice," gets third billing here as Maureen, the country girl discovered by Vivian who goes on to be the Windmill's star attraction. Reilly shows British defiance extending the Victory 'V' on stage after a bombing battering, but melts at the sight of a love struck young soldier. Winner of 2001's British Pop Idol, Will Young, makes his acting debut as Bertie, the show's singing male emcee. Frears uses a couple of nice, character defining devices to open the action outside of the Windmill. Mrs. Henderson has the unique habit of going sculling when in mourning, the film's second scene featuring her afloat in widow's weeds. When she needs to think, she travels to Northern France and sits at the grave of her son Alec, who died during WWI at the tender age of twenty-one. The theater's rooftop, which ironically never feels like anything but a stage set, provides an almost romantic backdrop of London aflame and under siege, but Frears fails spatially at suggesting the subterranean location of the theater itself. Show numbers feel ripped right from the period, although one does begin to wonder how the materials for such elaborate costumes (Sandy Powell, "The Aviator") were obtained during wartime. A couple of tunes are classically intercut with exterior action to convey a lot of story economically. "Mrs. Henderson Presents" is odd kin to last year's similarly set "Being Julia," which garnered a lot more buzz (and, indeed an Oscar nomination) for the overripe acting of its star, an American playing a Brit. Here, true Brit Dench takes a tailor made role and effortlessly slips it on.