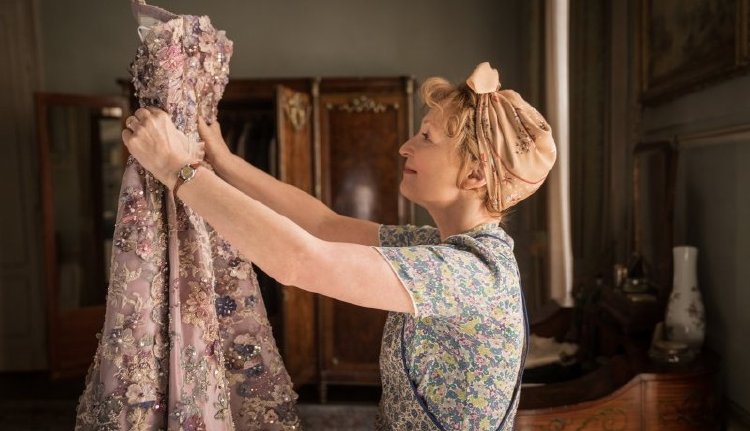 In 1957 London, cleaning woman Ada Harris (Lesley Manville) has only just learned that her beloved RAF pilot husband Eddie has been confirmed killed in action during the war.  Yet Ada brings joy to not only her friends Vi (Ellen Thomas) and Archie (Jason Isaacs) but everyone around her with her kind and generous spirit.  There is one exception, her client Lady Dant (Anna Chancellor, "Four Weddings and a Funeral's" Duckface), who asks Ada to hide her new 500 pound Christian Dior dress from her husband while citing post war belt tightening as the reason for holding back Ada’s wages.  But the sight of that glorious gown sparks something in Ada, who makes it her life mission to own one and so “Mrs. Harris Goes to Paris.”

Cowriter (with Carroll Cartwright, Olivia Hetreed and Keith Thompson)/director Anthony Fabian adapts Paul Gallico’s novel as an old-fashioned, adult fairy tale.  Manville’s made a couple of extreme character switches since she played the fierce guardian and businesswoman behind her brother's fashion house in 2017’s "Phantom Thread," but none so radical as this, her first turn as a fairy godmother of particular sweetness and light.

Ada and Vi share the bus every morning on their way to respective jobs.  We meet three of Ada’s.  Pamela Penrose (Rose Williams, "The Power") is an aspiring young actress with a penchant for dumping her wardrobe all over the floor.  Businessman Giles Newcombe (Christian McKay, "Me and Orson Welles") usually greets Ada on the way down the stairs from his sleek bachelor pad, usually accompanied by a ‘niece.’  The odious Lady Dant is planning a wedding in her sprawling, luxurious digs.  Ada spends her evenings in a local pub chatting with Vi as Archie plays the ladies’ man, but changes her schedule when Dior becomes her mission, walking instead of riding, taking on seamstress jobs in the evening.  Her coffers will rise and fall with luck good and bad, a couple of unexpected windfalls and sheer determination until she finds herself consulting three friendly winos in a Parisian train station.

That luck extends to finding herself outside of Dior on Avenue Montaigne just as the couturier is about to present his 10th anniversary collection (recreated by Oscar winning costume designer Jenny Beavan, “Cruella”).  When a young woman, Natasha (Alba Baptista), trips on the red carpet, Ada’s rush to help her allows her to enter the atelier, where she expects to find her choice of ‘frocks’ just as she does in Woolworth’s.  Madame Colbert (Isabelle Huppert), busy greeting her elite regulars for the show, is horrified, attempting to throw the woman out.  Ada declares her money as good as anyone’s, pulling out wads of bills which catch the attention of accountant André Fauvel (Lucas Bravo, Netflix's 'Emily in Paris'), who is all too aware of the rich’s tendency to neglect their bills.  Colbert must back down when the Marquis de Chassagne (Lambert Wilson) graciously invites Ada in as his guest.  Manville’s transformation is particularly notable as she swoons to the collection, cinematographer Felix Wiedemann zooming in to her blissful face that resembles none other than Betty White, so sweet is her countenance.

There is fallout, however, first in the form of her snobbish seatmate, Madame Avallon (Guilaine Londez), who demands exclusive access to the dress Ada had already told sympathetic showroom assistant Marguerite (Roxane Duran, "The Cursed") she wished to purchase.  Ada readily accepts her second choice only to discover that it will require weeks of fittings when she’d planned to return to work the next day.  A compromise is reached when Fauvel offers his absent sister’s room and head tailor M. Carré (Bertrand Poncet) is pressured to deliver ‘Vite, vite!’

There is romance in the air when Ada runs into the elegant, widowed Marquis again and as Ada attempts to match Dior model Natasha up with André through their shared love of Satre.  And while garbage collectors are on strike on the streets of Paris (noticeably protesting against ‘Avallon’), Ada will revolutionize the house of Dior itself when cost cutting measures are implemented.  But her adventures won’t be well and truly over until she returns to London only to have her dreams dashed by an act of kindness.

While the film is a charmer, it does overstay its welcome, the adaptation adding one too many story lines, its London climax betraying everything we’ve just learned about couture.  There is, however, a neat switcheroo in how one romantic possibility stands back for another to emerge more fully and how Ada’s comment about Christian Dior (Philippe Bertin) ‘resembling her milkman’ allows a London bus driver (Delroy Atkinson) to assume a position as dance partner.

It is 1957 London and Ada Harris (Leslie Manville) has worked hard as a charlady, cleaning others’ homes since her beloved husband Eddie became MIA during the war. Then sad news and good fortune – and a good look at a Christian Dior original – inspire her to go on a quest to have an exclusive designer frock of her very own in “Mrs. Harris Goes to Paris.”

I walked out of seeing “Mrs. Harris” and my first thought was “I just saw an adult fairy tale.” The question is, however, did it work? Well, the movie is too long and it piles on too many obstacles and problems for Mrs. H to overcome, but on the strength of the fairy tale pursuing a dream story and Leslie Manville’s touching and anchoring performance, yes, it does work.

Ada has toiled for years cleaning up after her sometimes slovenly clients. Then, she receives a package containing a telegram and a man’s ring. The ring was Eddie’s and the telegram tells her he is no longer MIA, leaving her a widow’s pension. While working for one “wealthy” but deadbeat client, she sees the Dior dress – the first designer dress she has ever seen and touched – and resolves to have one no matter what. This is where the story, and Mrs. H’s fortune, kicks in.

At this point, Mrs. Harris” divides into three (maybe four of five) stories with the first about how hard she works to earn the 500 pounds needed to buy the exclusive, one of a kind Dior original. That she gets the needed cash is a given, but how she gets it has its own highs and lows but always with a little help from her friends, Vi (Ellen Thomas) and Archie (Jason Isaacs).

Story number two covers her journey to Paris and to the House of Dior where she meets a wall of opposition from the manager, Madame Colbert (Isabelle Huppert) - imagine a common cleaning lady having the audacity to even want a Dior gown. She also meets, at a showing at Dior, a kind and kindred spirit, Marquis de Chassagne (Lambert Wilson), who steers her past the snobbery abundantly on display and is Paris’s most eligible bachelor.

Number three has two of Dior’s employees, financial officer Andre Fauvel (Lucas Bravo) and runway model Natasha (Alba Baptista), take Mrs. H under their wings. But, as the story and Mrs. Harris’s influence take hold you begin to wonder who is helping whom. You never doubt, not even for a second, that the lovable Ada will have her dream Dior gown. Getting there is fraught with obstacles that Mrs. H and her new friends will undoubtedly overcome.

Anthony Fabian directs what I discovered is the first of the four Mrs ‘Arris novels and, on the strength of the likable Leslie Manville and the adult fairy tale, we may see more of the lovable cleaning lady. (In the subsequent stories, she visits New York, Britain’s Parliament and Moscow.) It is nice to see a fairy tale for old people.