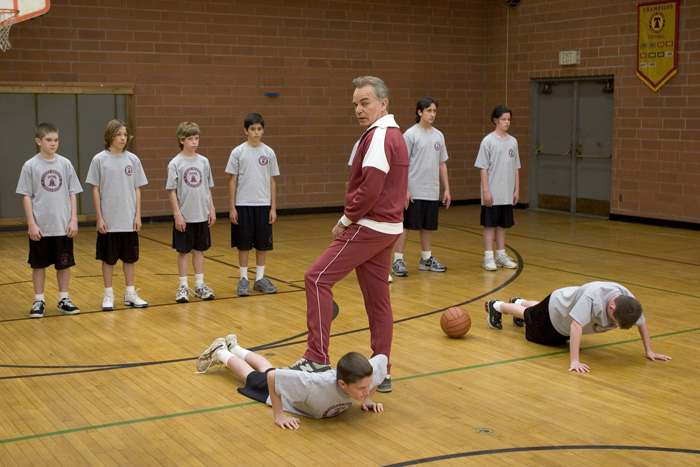 Small town boy John Farley (Seann William Scott who will forever be known as "American Pie's" Stifler) is enjoying success as a best-selling self help author on his first book tour when he discovers is home town wants to present him with the coveted corncob key. Elated, he veers off his agent Maggie's (Amy Poehler, TV's SNL, "Blades of Glory") itinerary to return home to his beloved mom and former 'Cornival' queen Beverly (Susan 'what was I thinking' Sarandon), but his elation turns to horror when he learns his mom is dating the sadistic phys ed teacher who tortured him and his pals when they were kids - "Mr. Woodcock."

Watch out when the best thing to say about a movie is that director Craig Gillespie (the upcoming "Lars and the Real Girl") has staged one of the better 'getting catapulted off of a treadmill' scenes. As written by Michael Carnes (written by) & and Josh Gilbert, I doubt "Mr. Woodcock" would survive half a season as a television sitcom. As soon as John gets a glimpse of Woodcock (the name reflects for what passes for humor here), he flashes back to his portly boyhood, where Woodcock slammed him on the mat and forced him to chin up in his underwear. An asthmatic's dubbed 'Wheezy' and made to run laps. Woodcock hasn't changed and soon the film devolves into a contest to win mom's affections. When Beverly agrees to marry Woodcock, John becomes obsessed with breaking them up. Combining his "Bad News Bears" coach minus the laid back geniality with the misanthropy of "Bad Santa," Thornton, whose talent far outweighs his film choices, comes up with such a rigid creepy guy it is pretty inexplicable why Bev would fall for him in the first place and an attempt to explain him by briefly introducing his abusive father is left hanging out there. William Scott's manic flipout is grating and juvenile and while Sarandon's presence is welcome, this is a most serious case of slumming. Poehler brings some humor to the proceedings as the cynical, alcoholic, nymphomaniac agent, but the material she's give is just too broad. As Farley's friend Nedderman, Ethan Suplee (TV's "My Name Is Earl") cannot be bothered to step out of Randy's skin. There is a slightly amusing climax involving a gurney and parade float, but it is way too little too late. "Mr. Woodcock" is an unfunny rehash of stuff we've seen a hundred times before.