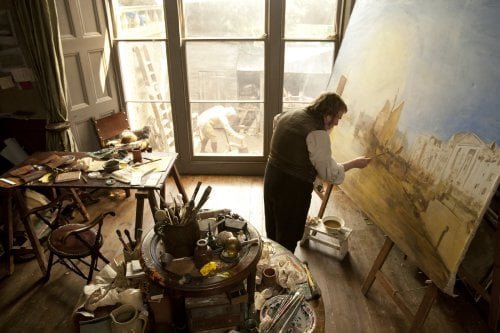 The man considered by many England's greatest painter was an enigma - gruff, often uncouth, unwilling to legally commit to a woman yet also capable of poetry, a refractor of beauty and a man uncommonly attached to his father, a retired barber whom he called 'Daddy.' He was celebrated in his time, but when his style became more impressionistic, his methods unconventional, he was also mocked. The painter most known for his seascapes and uncanny conjuring of light was "Mr. Turner."

With his Cannes winner for Best Actor (Timothy Spall, "All or Nothing") and Technical Achievement (cinematographer Dick Pope, "Another Year"), writer/director Mike Leigh ("Topsy-Turvy," "Another Year") has created one of the great films about an artist. He tells J.M.W. Turner's tale over the last twenty-five years of his life, showing his travels, his relationships with women, other artists and the aristocracy, each episode building our sense of the man while also illuminating the creative spirit which drove him. The film is stunningly photographed, Pope often capturing the qualities that Turner put on canvas while art direction, costume and makeup place us in his world. When he returns from a trip to Antwerp, his first concern is the state of his supplies. William Turner (Paul Jesson, "All or Nothing") acts as his assistant, while housekeeper Hannah Danby (Dorothy Atkinson, "Topsy-Turvy") pauses for signs of affection. She gets a gruff grope. When Turner's former mistress arrives with his two adult daughters and new grandchild to complain about his lack of financial support, we learn that Sarah Danby (Ruth Sheen, "All or Nothing," "Another Year") is Hannah's aunt. At the country estate of Lord Egremont (Patrick Godfrey), Turner tortures fellow artist Benjamin Robert Haydon (Martin Savage, "Another Year," "Rush") when he requests a loan, eventually giving the man half of what he'd asked for (later, learning of the man's real misfortune, Turner nullifies the debt). Egremont and his peers deem Haydon 'not of their temper,' yet, oddly, accept Turner who clearly isn't either. It's a tidy comment on how financial resources affect peoples' notions of social class. But Turner suddenly surprises us when he comes across Miss Coggins (Karina Fernandez, "Another Year," "Pride") playing piano, his eyes registering an appreciation of the visual and aural beauty. His croaking rendition of 'Dido's Lament' is moving. His coarse antics while painting in the company of young women set them to giggling, but leave them with a lesson. Turner traveled to get first hand experience and his appreciation for the light in the Eastern coastal town of Margate brings him to a rooming house run by Sophia Booth (Marion Bailey, "All or Nothing," "Vera Drake"). When he later learns she's lost her husband, Turner's appreciation of the woman is all the courtship she needs and Mrs. Booth becomes his last long term lover. In London, he's devastated when his father dies after a shared joke about his mother. Hannah, deteriorating before our eyes, continues to yearn for the man who shows her little attention. She's stunned when she discovers his secret life as 'Mr. Booth.' Leigh dots his film with curious events. Scottish scientist Mary Somerville (Lesley Manville, "Another Year," charming) intrigues him with her studies on violet light, using it to magnetize a needle. Strolling the latest exhibit at the Royal Academy, he delights his peers with his silent mockery of John Constable's (James Fleet, "Four Weddings and a Funeral") 'Opening of Waterloo Bridge' by daubing a splotch of that artist's prodigious scarlet into the middle of his own work, then returning to transform it into a buoy. He's lashed to a ship's mast to immerse himself into a swirling snowstorm. In one significant edit, Leigh cuts from Turner spitting on his canvas to moss dribbling down a cliff, an ingenious juxtaposition imagining the painter's eye. Even after a theater piece satirizes his unusual techniques to gales of laughter and the Queen herself flinches from his latest work, Turner refuses the enormous sum of $100K from an American millionaire for his works, intending instead to bequeath it to his country. As his health rapidly declines, he calls Mrs. Booth 'Me damsel,' words he'd used for Hannah, but his last 'The sun is God!' find him embracing his passion - the light. Spall's Turner looks like a Toby jug. He bustles his bulk about grunting like an exhaling bellows. The actor, occasionally revealing an actor's tics, nonetheless gets at the dichotomies of the man, getting us inside his head. His contrasts are elevated by Leigh as he ends with the two women he leaves behind, Mrs. Booth in affectionate mourning, Hannah in lonely despair, abandoned in his now empty home. Gary Yershon's ("Another Year") magnificent score, sad and edgy, almost prickly, sidesteps period convention Grade: