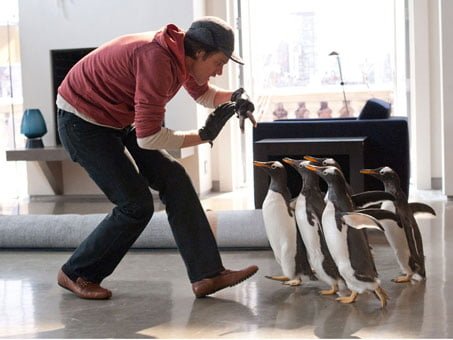 When Tommy was a young boy, he almost never saw his dad who traveled the globe for National Geographic. Now he's a big time real estate developer who will get his name added onto the firm's if he can convince the notoriously choosy Mrs. Van Gundy (Angela Lansbury) to sell Tavern on the Green, the only commercial property within New York's Central Park. But life isn't all rosy for Tommy as he still loves his ex (Carla Gugino, "Watchmen") and his two kids aren't thrilled about spending their alternate weekend with him. That is, until, the souvenir his father bequeathed him from Antarctica arrives to teach a life lesson in "Mr. Popper's Penguins."

From the writing team behind "Sex Drive" and "Hot Tub Time Machine"(?!) comes a comedy that reunites Jim Carrey with wild animals and the results are not as horrifically heinous as they could have been, mostly because it is nigh on impossible not to love penguins. The film is based on a 1938 novel that it appears to have little in common with, presumably because poo and fart jokes were not in vogue back then, not to mention that modern yet already moldy cliche of the dad who works so much, he's lost sight of his family. "Mr. Popper's" is neither a return to form for Carrey nor a particularly good film, but it does boast two terrific sight gags and should please the kids. The elder Popper is established pulling the Flatiron Building out from under owner Mr. Gremmins (Jeffrey Tambor, TV's 'Arrested Development') by concocting a retirement fantasy complete with sound effect support from his secretary Pippi (Ophelia Lovibond, "Nowhere Boy," "No Strings Attached"), a woman who outruns Spiro Agnew in the alliteration department. But he strikes out when he goes to pick up his kids for their alternate weekend, failing miserably with boyfriend advice for tween daughter Janie (Madeline Carroll, who really needs another "Swing Vote"). When the first Gentoo penguin arrives and Popper finally realizes it's actually alive, he tries every agency he can to get rid of it, but by the time the New York Zoo responds (Clark Gregg, "Iron Man," "Thor") Captain and the five additional penguins that have been delivered since have been mistaken for a birthday present by younger child Billy (Maxwell Perry Cotton). Much multi-directed bonding ensues until Popper's placing more importance on the hatching of Captain's egg than wooing Van Gundy. Carrey works well with the penguins (Captain, Lovey, Bitey, Nimrod, Stinky and Loudy, all named for their characteristics) but there's not much in the way of a segue between his oily business self and the caring family man who emerges. Perhaps Mark Waters ("Mean Girls," "Ghosts of Girlfriends Past") merely threw a switch. The performance is a mixture of mugging, old tricks (the slo-mo routine) and some genuine sentiment and befuddlement with the women in his life. Gugino is warmly sexy, Carroll is either sulks or smiles. The cast also includes the likes of Philip Baker Hall ("Magnolia," "Zodiac"), Dominic Chianese (HBO's 'The Sopranos'), David Krumholtz ("Sidewalks of New York," TV's 'Numb3rs') and, most ill-used of all, James Tupper (TV's 'Men in Trees') as Amanda's current love interest. The real heavy lifting is done by the penguin trainers and the visual f/x team of Blondel Aidoo ("Enchanted") and Richard Hollander ("Titanic") who had to fill in for all the things the real penguins couldn't do. There is a wonderful early bit where Popper comes home, unaware that Captain has figured out how to maneuver the tub faucet. We see Captain standing behind the frosted glass door to the bathroom, but then he begins to rise and swim and we await what will happen when Popper opens that door. The gag might not be realistic (who has airtight bathroom doors?), but it looks terrific. The Guggenheim Museum has been used to great effect in movies like "The International," but whoever thought of using its interior as a penguin slide deserves a pat on the back. The transformation of Popper's sleek Park Avenue apartment into a Winter Wonderland makes one question the film's summer release date. The legendary Tavern on the Green, which closed as a restaurant in 2009, is nicely recreated (production design by Stuart Wurtzel, "Enchanted"), but later scenes in Antarctica look like old-fashioned rear projection. Truth be told, "Mr. Popper's Penguins" had me looking frequently at my watch, but even in its late goings it offered up little tidbits like Captain overcoming her 'flight envy' with a New York Zoo gift shop kite or the problem 'P' girl Pippi meeting Quent, whose only line is 'Quite!.' It's a C, C- movie perked up by its penguins.