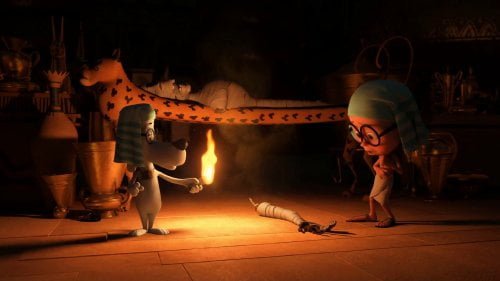 After Social Services' Ms. Grunion (voice of Allison Janney) threatens to take his boy away for biting a taunting classmate, Mr. Peabody (voice of 'Modern Family's' Ty Burrell) takes matters into his own paws by inviting the girl's family over for a gourmet dinner party. He expressly forbids the lad from telling Penny Peterson (voice of 'Modern Family's' Ariel Winter) about the WABAC time traveling machine, but boys will be boys and when Penny becomes engaged to King Tut (voice of Zach Callison) and refuses to leave ancient Egypt, her rescue is up to "Mr. Peabody & Sherman."

When I first saw the plasticine 3D CGI creations which were replacing the flatly drawn Jay Ward cartoons of the 50's and 60's, I had a bad feeling, but damned if director Rob Minkoff ("The Lion King," "Stuart Little") and screenwriter Craig Wright (HBO's 'Six Feet Under,' Showtime's 'United States of Tara') haven't stayed true to the spirit of the original while both fleshing out the concept for feature length and modernizing it for a new generation. In their way, Mr. Peabody and Sherman were forerunners of Wallace and Gromit. Mr. Peabody is a talking dog who is also the most intelligent being on earth, a Nobel Prize winner, an adventurer and gourmet chef. When he finds an abandoned infant in an alley, he adopts the boy with special dispensation (in the original, from the President, here from a judge voiced by '24's' President, Dennis Haysbert). Minkoff jumps into action with a quick trip to the French Revolution, establishing the titular couple's hobnobbing with historical figures and his new iterations' ill-advised-but-generally-not-too-off-putting incorporation of scatological humor. Then it's Sherman's first day of school and when Sherman debunks classmate Penny's expected answer about George Washington and the cherry tree, she's livid, taking revenge by publicly humiliating the boy about his adoptive parent. Sherman proves her point by biting her. While Mr. Peabody pulls out all the stops to impress Penny's parents (voices of Stephen Colbert and Leslie Mann), Sherman lets slip to Penny that it was Washington himself who told him about that tree, and so the boy already in the dog house is pressured into demonstrating the WABAC, returning alone with his tail between his legs. Mr. Peabody hypnotizes the Petersons and the duo return to 1332 B.C. Once convinced that marriage to the ill-fated king is not in her best interests, the three manage to escape, but further misadventures await when the WABAC needs charging and Sherman disrupts the time-space continuum. The animators take care to create the characters in Ward's style (Sherman's protruding teeth being the one major misstep). Art direction is busier, but objects, like the Trojan Horse, have the same delightfully silly exaggeration fans will remember. Burrell and Max Charles (2012's "The Three Stooges") set the tone with spot on vocal work, Burrell's dry, studious delivery mixed with the joy of teaching and pleasurably groan-inducing puns. Best among support is Patrick Warburton, whose Agamemnon revels in his own body odor, and Stanley Tucci's exuberant Leonardo da Vinci. Lake Bell, whose own "In a World..." explored the world of voiceover artists, can now add 'Mona Lisa speaks!' to her resume. Vocal actor Jess Harnell does quadruple duty, getting off perhaps the film's funniest line from former President Bill Clinton. "Mr. Peabody & Sherman" could have used a little more wit and a few more of those bad puns, but it has the right spirit, delivers a few good zingers and mostly sidesteps the boggier aspects of establishing a franchise. Clearly there's a vast amount of new territory for Mr. Peabody and his adopted boy to explore - let's hope for some more subversive playfulness should they go forward. B "Mr. Peabody & Sherman" is preceded by the short "Almost Home," in which a bunch of Pac-men like aliens led by Captain Smek (voice of Steve Martin) encounter one cataclysmic obstacle after another in their search for a new planet to call their own. Simple, sweet and snappy, it makes for a fine appetizer to the main course.