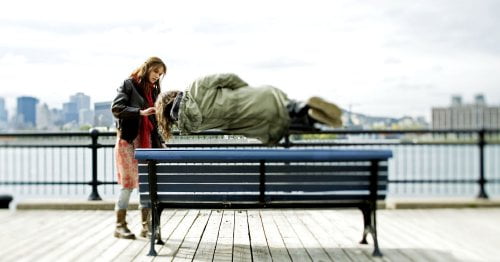 It is the year 2092 and 118-year old Nemo Nobody (Jared Leto) is the oldest living mortal on earth. As his death draws near, public interest in his story brings a young reporter (Daniel Mays) to his bedside to get the details of the old man’s life. The journalist is startled when Nemo tells him not about one life, but of three lives in three different universes as “Mr. Nobody.”

A boy stands on the platform at a railroad station. He must face a choice: board the train to be with his fleeing mother (Natasha Little) or stay behind with his morose father (Rhys Ifans). He makes his choice in that world but this choice is just one of many as Nemo journeys between parallel universes. His stories are told through flash backs from the mind of the last mortal man on Earth. Writer-director Jacob Van Dormael makes his first feature film since 1996 and I think he spent much of that time crafting an elegant tale about time travel and interspatial hopping. We are presented with the lives of Nemo as he moves between space and time. Amazingly, Van Dormael keeps his eye on the ball and weaves his intricate stories into a fine tapestry. What could have been a confused jumble – like last year’s bloated financial disaster “Cloud Atlas” - is anything but in “Mr. Nobody.” His story is evenly told and its jumps in time and space introduce his lives and wives with exceptional clarity and evenness. Not once did the filmmaker leave me in confusion. The cast, led by Jared Leto, includes Sarah Polley, Diane Kruger and Linh Dan Pham as Nemo’s significant others on three different worlds. But, it is the several incarnations of Nemo at the various times in his life – ages 9, 16, 34 and 118 – that are the most captivating to watch. Jared Leto plays 34 and 118 year old Nemo and gives another stellar performance – see Leto’s other starring turn in “Dallas Buyers Club. The youngsters playing nine-year old (Thomas Byrne) and 15-year old (Toby Regbo) Nemo are terrific as their early years play out – discovering girls, falling in love and growing up times three. The terrific story and fine acting are also joined on many other technical levels. Editing is seamless despite the multi-universe jumps in time. Camera work is also first-rate as is costume makeup and production design. “Mr. Nobody” is a film that deserves to be seen. I hope it is.