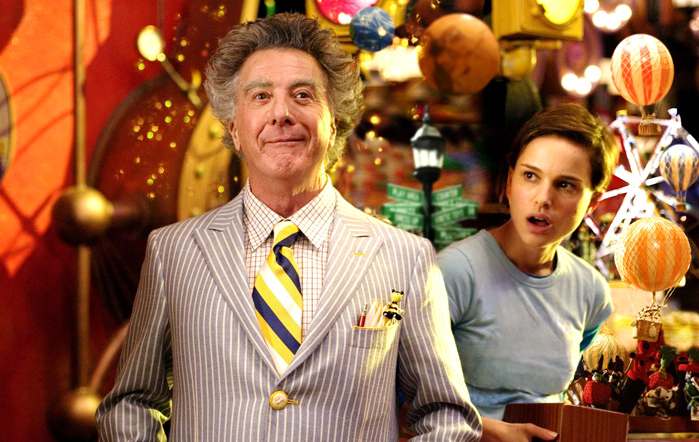 Edward Magorium (Dustin Hoffman) is the 243-year old owner of a magical toy store where not only the toys come to life, the entire store does! When he finally decides to turn the reigns over to his not very confident manager Molly Mahoney (Natalie Portman), the entire establishment throws a temper tantrum. Something needs to be done to save “Mr. Magorium’s Wonder Emporium.”

On the surface this looks like a light hearted, magic-filled fantasy about a magical man and his wondrous store. There is no doubt about it that the special F/X, imaginative sets and production designs make this a visual treat. But it is the serious aspects of the story that make “Mr. Magorium…” interesting. I was bothered, when I saw the trailer for the first time, with Dustin Hoffman’s lisping, affected speech as Magorium. The actor, though, imbues Mr. G with a childlike wonder that makes him a likable, sympathetic character. Life, death, friendship, belief in one’s self and the embedded magic of the story give the film a serious nature that mixes well with its whimsy. The small troupe of actors at center stage does yeomen’s work. There is nothing remarkable in Natalie Portman or Justin Bateman’s roles, just decent, likable characters who do their best not to be overwhelmed by the copious F/X. 10-year old newcomer Zach Mills is notable as Eric, a friendless boy adopted” by Mr. G, Molly, Henry and, especially, the Emporium. He is fresh faced and able to stand tall with the veteran thespians. There is a lot to watch with the copious CGI special F/X but it is the heart of the story that makes this a mature film about believing in magic and yourself. There is enough flash to amuse the younger kids but Wonder Emporium” is aimed at the older kids on up.