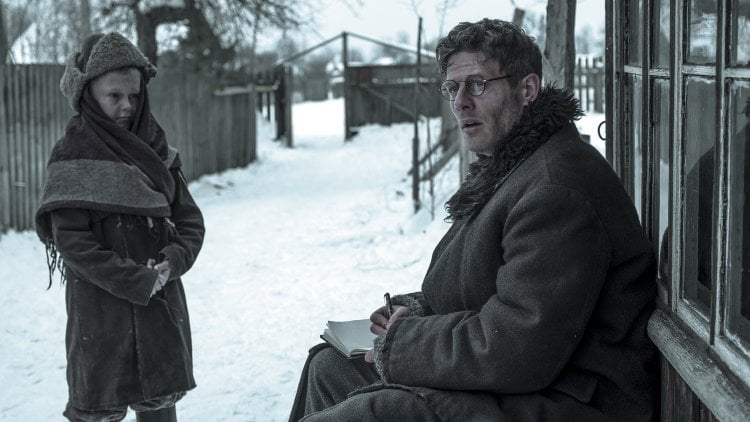 Gareth Jones (James Norton) is a former British bureaucrat tuned journalist. Following a promising lead from a friend, he treks across Europe and into the heart of Soviet Russia with the plan to interview Josef Stalin. Those plans are dashed when he secretly travels to the Ukraine and a real story of horror becomes clear to “Mr. Jones.”

Director Agnieszka Holland and writer Andrea Chalupa loosely base their story of one man’s enlightenment and discovery on real events taking place in Soviet Russia during the early 1930s. Gareth made a journalistic splash following his interview with Adolph Hitler. On the strength of his article, he is given permission to go to Moscow, ostensibly to interview Stalin about the brilliant successes of his five year economic plan.

Jones realizes that his movements are restricted to Moscow and the positive propaganda of the Soviet bureaucrats and, without official permission, travels incognito to the Ukraine. There, he does not find prosperity and happy peasants. Instead he finds villages empty, people starving, forced collection of grain and, shockingly, cannibalism. Garth’s story is to get this story of horror and suffering out to the world.

“Mr. Jones” is a solidly told, fact-based story, well-acted and well-written, that, even to an amateur historian, brings vivid attention to a subject that has been woefully under-told – until now. While the names of Hitler and Stalin are just bandied about, real personae are shown, like David Lloyd George (Kenneth Cranham), author George Orwell (Joseph Mawle) and Walter Duranty (Peter Sarsgaard), the New York Times Moscow bureau chief who denied Stain’s imposed famine that killed millions.

The filmmakers succeed in putting the viewer into the midst of the horror with often simple but poignant scenes, such as Gareth, on a crowded peasant train, absent-mindedly pulls an orange out of his pocket, peels and begins to eat it. Then, he realizes that he is in the very midst of starvation. It is a powerful moment and one of several.