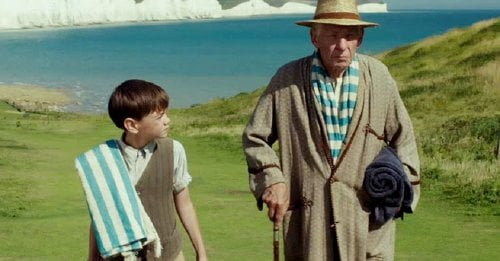 At 93, Sherlock Holmes (Ian McKellen, "Gods and Monsters," LOTR) lives in a cottage on England's southeastern coast with his housekeeper Mrs. Munro (Laura Linney, "Hyde Park on Hudson") and her young son Roger (Milo Parker) who helps him with his beekeeping. The old man has been harvesting royal jelly as a restorative for his quickly fading memory. We find him struggling to write his own account of his last case, the one which caused him to retire and has long haunted "Mr. Holmes."

Bill Condon reteams with his "Gods and Monsters" star and creates a bookend to that film in which an aging James Whale, living with his housekeeper, grappled with his past and his most famous film creation while engaging in a new relationship with a young man. While the real life Whale's story was driven by his homosexuality, the fictional Holmes finds himself the only survivor of his famous past having to come to terms with emotions he'd always kept deeply buried. McKellen's performance spans thirty years, the actor portraying a man both 10 years younger and twenty years older than his actual age and he is, in a word, phenomenal, a coolly elegant intellectual in 1919 turned doddering footnote in 1947. The climatic moment when McKellen's Holmes finally shows an outward display of grief and repentance to his housekeeper is gut wrenching, Condon's story telling setting up the moment as a twilight howl for all the losses in the man's life. The film begins with a wonderful foreshadowing created by Jeffrey Hatcher ("Stage Beauty") in his adaptation of Mitch Cullin's novel 'A Slight Trick of the Mind,' one which encompasses Holmes's scholarly, slightly curmudgeonly approach to children as well as his deductive observational powers. He is in a train compartment on his way home from Japan, the third story strand which runs throughout the film. He was invited there by Tamiki Umezaki (Hiroyuki Sanada, TV's 'Extant'), ostensibly to research the country's elusive prickly ash, rumored to combat aging even better than royal jelly. They find the plant in Hiroshima's devastated landscape, life springing death. It is through Umezaki's mother Maya's (Takako Akashi) questioning that we learn Holmes never wore a deerstalker (an illustrator's embellishment), prefers a cigar to a pipe and that, in this world, it was Watson who wrote up his and Holmes's cases as popular entertainment. It is Watson's 'The Lady in Grey' which Holmes is attempting to rectify (at one point he enters a theater for the b&w movie-within-a-movie version where Sherlock is portrayed by "Young Sherlock Holmes's" Nicholas Rowe) and Condon inches the story forward as Holmes deals with everyday memory failings in the present. He was engaged thirty years prior to tail Ann Kelmot (Hattie Morahan, "The Bank Job") by her distraught husband, convinced she'd become wrapped up in trying to contact her miscarried children with the help of her glass harmonica teacher Madame Schirmer (Frances de la Tour, McKellen's 'Vicious' castmate). It was one of Holmes's failures and his realization as to why proves the thunderbolt which echoes into the present. Hatcher's screenplay is more hopeful than his source, replacing one distinct loss with the threat of another, yet he keeps the conceptual constructs in place, the failed case of the past reflected in two in the present, 'solved' by the two separate halves of a now whole Holmes. Condon's beautiful multi-period production contrasts the stark post-WWII minimalism of Japan's ravaged landscape against a refined post-WWI London and the bucolic countryside, all of which can be seen as the warring factions of Holmes's mind. Carter Burwell's melancholy score uses many of the instruments which made his work for HBO's 'Mildred Pierce' so affecting. The director has gotten a mature and sensitive performance from young Milo Parker, who, more than anyone is McKellen's costar here. A deglamorized Linney acts as Holmes's unsentimental judge. Grade: