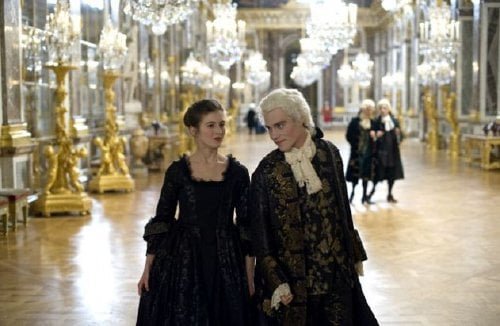 In 1763, the ambitious Leopold Mozart (Marc Barbe) led his children, eldest daughter Nannerl (Marie Feret) and young son Wolfgang (David Moreau), on a grueling concert tour of European capitals. The social mores of the time prohibited women from composing and playing certain instruments like the violin and organ, in public. But, Nannerl Mozart is every bit as talented as her prodigy brother and, despite her father, tries to dedicate herself to music as “Mozart’s Sister.”

Léopold Mozart (Marc Barbé, "The Duchess of Langeais") knew he had a prodigy on his hands and worked hard to keep the family in circulation, performing at royal courts. He encouraged his son Wolfgang to compose and paraded him as a genius a year or two younger in age than he actually was. But in allowing the prejudices and mores of the day to cloud his vision, Léopold failed to capitalize on a genius equal to his son's, perhaps even greater, in "Mozart's Sister." Writer/director René Féret ("The Man Who Wasn't There") has made a family affair out of a film about a family. He has cast his daughter, Marie, as the titular Nannerl Mozart. She has the opportunity to play a period role as a pre-feminist who bucks tradition before buckling under, including a cross-dressing stint to perform for the Dauphin (Clovis Fouin). In parallel is Marie's younger sister Lisa as the younger-by-one-year Louise de France, one of three daughters of the king sent away from the court to a convent while her brother preens in Paris. When the Mozarts have trouble with their carriage, the Abbess (Dominique Marcas) reluctantly allows them to take shelter and Nannerl meets Louise. They become fast friends. The four years younger Wolfgang (David Moreau) doesn't look down upon his sister, who their father has relegated to accompaniest and vocalist, but their father even sings his praises in Nannerl's music book. But after hearing one of her compositions, unaware that it was written by a woman, the Dauphin declares her a marvel, commissioning more work. Nannerl leaves the bosom of her family to strike out on her own, but the confused sexuality of her relationship with her patron boils over and she eventually returns. A "Victor/Victoria" for the classical set within a loving family that suppresses its resentments, "Mozart's Sister" tells a little known tale with some kinky subplots. Young Lisa Féret, in particular, mesmerizes with a subdued yet somewhat feral performance, older than her years.

I went online after seeing “Mozart’s Sister” to see how much fact was embedded in the “fiction” of Rene Feret’s elegantly done period piece. The filmmaker was privileged to shoot in the Palace of Versailles and couples this incredible backdrop with a fascinating story (that plays surprisingly close to real events), fine acting and the music of Nannerl and Wolfgang as they entertain Europe’s royalty, including King Louis XIV of France. This package makes for viewing time well spent, especially with the music and centered performances by the director’s daughters Marie Feret, as the titular character, and Lisa Feret as one of the cloistered daughters of the king, Louise de France. The moments between Nannerl and Louse are magical and they two young actresses show an intimacy that can only come from real sisters - and their director dad. Techs are superb, from the previously mentioned Versailles-setting to costume befitting the time and social level of the characters and lensing that deftly captures it all with a rich palette of colors. The point the movie makes – a musical prodigy like Nannerl, just because she was a woman of “marriageable age,” was denied pursuit of her destiny by her father and society – is passionate in telling the story of a woman whose potential musical talent we are deprived. Liberties were taken by scripter-director Feret in spicing up the story with the fictional romance between Nannerl and the crown prince of France, Le Dauphin (Clovis Fouin) but, hey, it is literary license. Plus, that license makes for a more interesting story.