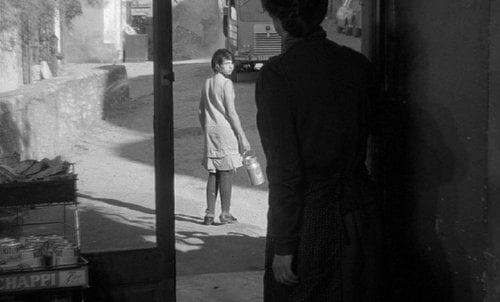 Life for teenaged Mouchette is no bed of roses. She lives in a hovel, her mother is dying and her father does not even bother to take care of his daughter. At school, she is maligned and abused by her teachers and her schoolmates shun her. Hard times and sorrow seem to be the fate of “Mouchette.”

In a small French town, Monsieur Mathieu (Jean Vimenet), a gamekeeper, keeps an eye out for the traps laid by the poacher Arsène (Jean-Claude Guilbert, "Au Hasard Balthazar"). Meanwhile, a young unkempt girl whose mother (Marie Cardinal, "2 or 3 Things I Know About Her") lies dying, leaving her to tend to an infant brother while her father (Paul Hebert) and older brother drink, is condemned by her appearance within the village. One stormy night the escalating conflict between the gamekeeper and the poacher will determined the fate of "Mouchette." In Terrance Malick's "The Tree of Life," Jessica Chastain's character notes that one can go through life in one of two ways - with grace or by nature. If the doomed cleric in "Diary of a Country Priest" was the exemplar of grace, Mouchette represents nature in this film which, like "Diary," was also adapted from a novel by Georges Bernanos. Mouchette has a horrible lot in life, but she doesn't take it all sitting down. When school lets out, she hides in a ditch and flings mud at the schoolgirls who look down upon her. When a shopkeeper who had showed her a kindness insults her, Mouchette throws her croissant back. This little girl is independent and suspicious of charity. As in "Diary of a Country Priest" a love triangle causes problems for more than those involved. The married Mathieu has a thing for Luisa (Marine Trichet) the local barmaid, but she seems to prefer Arsène. As this scene is playing out we witness Mouchette's only true happiness as a young man on the bumper car rides flirts and she smiles, a rarity in a Bresson film. But the attention is short lived when her father finds her with the young man at the shooting gallery. When the gamekeeper and poacher meet after imbibing, a fight breaks out. Arsène finds Mouchette and, thinking he may have killed Mathieu, asks her for an alibi. Mouchette sees a fellow pariah in Arsène and follows him back to his hut where he rapes the girl. Mouchette's reaction is conflicted (later she will tell the gamekeeper's wife that Arsène is her 'lover'), grasping at any straw of kindness or collaboration. As in other Bresson films, once again an 'innocent' is tormented and witnesses the worst of man, but this time, unlike the country priest or the donkey Balthazar, the subject is earthbound and makes a choice against God. And yet Mouchette's final decision involved two trinities, the three dresses given her by the undertaker and her three attempts. Nadine Nortier, who was in her late teens when playing this, her only film role, is perfect, a nonactor with an expressive face which tells us all we need to know. All of Bresson's signature touches - the closeups of hands and feet involved in some task, the use of natural sound - are present with a dollop of irony added in a school song about not giving in to despair (which Mouchette, of course, refuses to sing until called out by her teacher).