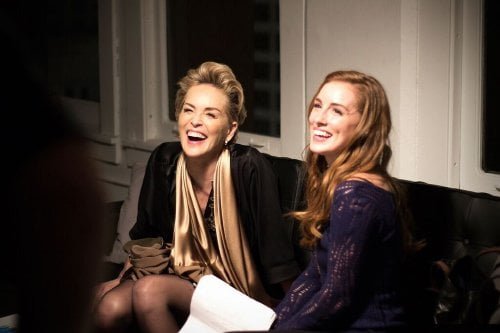 On the same Mother's Day weekend that Susan Sarandon's meddling mom movie opens theatrically, another film with her in a costarring cameo, the indie "Mothers and Daughters" arrives on VOD. Unfortunately it has more in common with Garry Marshall's "Mother's Day" than Sarandon's Scafaria valentine. The film's central character is Rigby (Selma Blair, "Storytelling," "Hellboy II: The Golden Army"), a single photographer who lives in Manhattan's Cow + Pig building. It is her recollection of her mother that opens the film, one in which the little girl is told that windows are 'picture frames,' the theme that is supposed to connect the film through photographs of her neighbors. Yet oddly, we only see Rigby photograph budding rock star Nelson Quinn (Luke Mitchell, TV's 'Agents of S.H.I.E.L.D.') and the widower who lives down the hall with his young son. This pretty much sums up the random, sketchily drawn character portraits written by Paige Cameron. Besides Rigby, whom Blair makes far more interesting than the film deserves, there is Becca (Christina Ricci), a young woman resisting pleading phone calls from her sister Beth (Courteney Cox) after the death of their mother, at least until Beth's husband Peter (Paul Adelstein, TV's 'Private Practice') intercedes. Also in the building is Georgina Scott (Mira Sorvino, "Mighty Aphrodite"), a middle aged lingerie designer living with wildly supportive male model Sebastian (Christopher Backus, TV's 'Underground'). She's about to be featured in the magazine run by Nina (Sharon Stone) when she opens up to her lover about an email from her buried past. Nina has her own problems with daughter Layla (Alexandra Daniels, TV's 'Salem'), another Pig + Cow resident who's ditched her pricey private education for some mysterious pursuit while also reconnecting with her 'stoner' college roommate Tricia (Stephanie Shamie), much to mom's dismay. In another striking apartment lives Gayle (Eva Amurri Martino, "Saved!," "That's My Boy") who is beside herself handling the debt incurred by husband Kevin (Paul Wesley, TV's 'The Vampire Diaries') as he tries to launch a high end bakery business. The marriage caused estrangement from Gayle's parents, but she reconnects with mom (Sarandon, Amurri's real mom) via Skype at her husband's urging. This is the type of criss-crossing, female-centric project filmmaker Rodrigo Garcia excelled with in "Mother and Child" and "Nine Lives," but director Paul Duddridge doesn't seem to have a clue how to tell a story or create visual interest. Every scene seems to feature a FaceTime session or two characters talking in a room. When he does venture out - Rigby snapping away at a rock show for example - representations of her work fail to justify her reputation. Hers is the only story that's vaguely interesting, yet even in this, apparent nice guy Quinn is thrown under the bus to make a maternal character point. Besides Blair, Sarandon does nice work in one scene while "The Blind Side's" Quinton Aaron has loads of charisma in a small role as Rigby's GP. Like Backus, Dave Baez's ("Casa de los babys") obstetrician is too perfect while Sharon Stone is yanked from shrewish mother to proud mom by the script. Grade: D Like her former 'Friends' costar Cox, Jennifer Aniston is also starring in a Mother's Day movie, the latest unfortunate holiday-themed ensemble from Garry Marshall ("Valentine's Day," "New Year's Eve"). In a film starring Marshall's "Pretty Woman" star Julia Roberts sporting a weird red bob and pasted-on toothy grin, Kate Hudson in a Good Housekeeping spread, the great Margo Martindale as some kind of Tea Party retiree and "Tomorrowland's" Britt Robertson as a self-involved single mom, Aniston is the one shining light (Roberts does get in a good one in a closing credit outtake). The film is full of tasteless racial gags (excusing itself by having the targets laugh along), the unfunniest stand-up comic ever (Robertson's English baby daddy) and a vagina float yet still remains thoroughly predictable. Only Aniston's comic timing lifts these dire proceedings up, but the load is too heavy for anyone to bear. Grade: