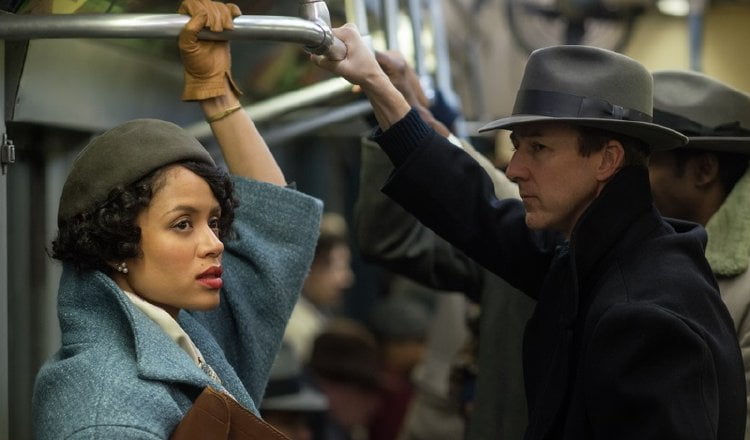 When his only friend and mentor Frank Minna (Bruce Willis) is murdered, private eye Lionel Essrog (producer/writer/director Edward Norton) investigates, uncovering a vast network of corruption that leads to powerful New York City developer Moses Randolph (Alec Baldwin). Randolph's public persona is in stark contrast to the man who would wipe out entire neighborhoods, displacing people like Laura Rose (Gugu Mbatha-Raw) who just may be the light to wipe out the darkness for the oddball Tourette's sufferer his boss called "Motherless Brooklyn."

As it’s traveled around the festival circuit, writer/director Ed Norton’s (“Keeping the Faith”) long-in-coming sophomore film has been criticized for its length (222 minutes) and the filmmaker’s performance, one punctuated with the expected tics and yelps associated with Tourette Syndrome. However the film I saw is a beautifully directed period piece telling a tale of corruption, activism, duplicity, loyalty and love with an aching tone of melancholy. Its NYC builder grabbing political power and using thugs to take out anyone who might stand in the way of his very white vision threatened with family skeletons earns it comparisons to the L.A. set “Chinatown,” but the two films’ atmospheres are as different as the cities they reflect.

Norton, whose grandfather designed Columbia, Maryland as a place of racial and economic equality, resets Jonathan Lethem’s source novel from recent days to the 1950’s, right around the beginning of the civil rights movement. Lionel, whose coworkers call him Freakshow, is one four varying levels of charity cases Frank’s taken in, and when we first meet him, it’s on an autumn day in a vintage automobile, his far less brilliant coworker Gilbert Coney (Ethan Suplee) behind the wheel. Between costume (Amy Roth, “Indignation”) and color scheme (production designer Beth Mickle, HBO’s ‘The Deuce’) we can feel the chill in the air as Frank relays his orders. Lionel, who has something approaching a photographic memory, will monitor Frank’s meeting from outside, its purpose unknown to him, and take action following his boss if he mentions ‘going to the can.’ We can see the shadowy, interior gathering which quickly gets tense. When a worried looking Frank is piled into a car, he's tailed by the none-too-competent Gil, the duo catching up to him in Queens just in time to see him shot. Frank dies in the OR, his last words to Lionel sounding like ‘Formosa.’

After dealing with Frank’s widow Julia (Leslie Mann), Lionel replaces his cap with his boss’s fedora and returns to the office where Tony Vermonte (Bobby Cannavale), who’s clearly been sleeping with the boss’s wife, is placed in charge of himself, Gil and Danny Fanti (Dallas Roberts). But Lionel’s intent on avenging Frank and snooping at the Formosa Café leads him to the Red Rooster jazz club run by Billy Rose (Robert Ray Wisdom). With Danny’s help, he finds the ‘colored girl’ discussed by Frank’s killers. Laura Rose, who works with activist Gabby Horowitz (Cherry Jones), explains how Moses Randolph operates. A meeting ostensibly run by the Mayor and his commissioner on slum clearance William Lieberman (Josh Pais) is disrupted by a bearded man in rumpled clothes. Lionel, taking on the identity of newspaper reporter Jacob Gleason (Nelson Avidon), follows Paul (Willem Dafoe), who turns out to have a most surprising connection to his case.

Shadowy figures, a missing file, condemned apartments, a looming Borough Authority building and a smoky jazz club with a sympathetic Trumpet Man (Michael Kenneth Williams) all swirl around in Lionel’s injured brain which he constantly apologizes for. But Laura not only accepts him, she leads him into a dance at her dad’s club, his agitation intensifying, then calming under her touch. A trio of violent episodes will draw them even closer.

Norton grounds the film both before and behind the camera, using his character’s Tourette’s to brand him as damaged goods and as an indicator of Lionel’s discomfort. Not everyone in the large ensemble is as effective, Cannavale tipping his hat too soon, Dafoe uncharacteristically unfocused. Although typecast, Baldwin delivers a third act speech on how power works with chilling authority. Mbatha-Raw may be the piece’s damsel in distress, but her character’s no pushover. Dallas Roberts is period notable in a small role.

“Motherless Brooklyn” is an old-fashioned noir which anchors big ideas about urban evolution with characters whose small stories we care about. The ending is lovely, Lionel accepting Frank for what he was as Frank’s last gift brings peace to the deserving.