Mother of Tears: The Third Mother 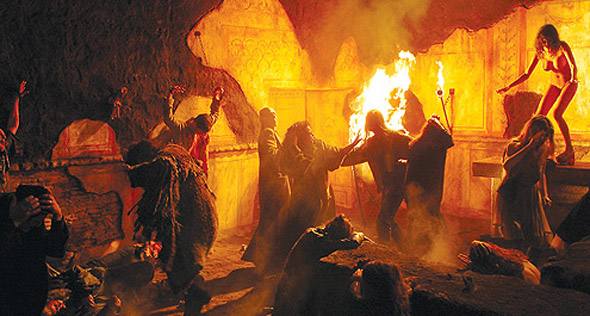 As a restoration student at the Museum of Ancient Art in Rome, Sarah Mandy (Asia Argento, "Dario Argento's Trauma," "Marie Antoinette") is exposed to the urn whose unearthing has subjected the city to madness, chaos and human despair. But what she comes to learn - that her own mother was a powerful white witch killed by the urn's inhabitant - means that Sarah herself must vanquish the great black witch known as the "Mother of Tears."

Sixty-seven year old Italian horrormeister Dario Argento ends his witches trilogy which began with 1977's "Suspiria" with equal parts of the gory imagery he is famed for and cheesy silliness. "Mother of Tears" isn't a very good movie, but it is recognizably an Argento film and often what makes it bad makes it entertaining. Bad acting? We have that in spades here, beginning with Argento's daughter, whose presence in films such as "Marie Antoinette" and her own "The Heart Is Deceitful Above All Things" prove she can act, but some of the hilarious line readings, especially from supporting players, provide guffaws. And one cannot condemn a film that has Udo Kier pop up to explain just what the hell is going on, complete with horde of crazies beneath his window looking for exorcisms! From a distraught mother throwing her fake baby off a bridge (watch as it bonks off a pylon on the way down!) to the group of cackling punked out witches who wreck havoc upon their arrival at Rome's airport to practically no one's chagrin, "Mother of Tears" is pretty awful but in a fun way. When Sarah finally makes her way down to the catacombs, dear old dad offers up a pretty spectacularly gory orgy, but the titular witch is all too easy to dispatch and the last shot is so gloriously cheesy one cannot help but wonder if Asia and costar Adam James (HBO's "Band of Brothers," "The Road to Guantanamo") are laughing with relief at what they've just escaped in character or not. C Robin: I’ve always thought Dario Argento a hack. “Mother of Tears” proves it.