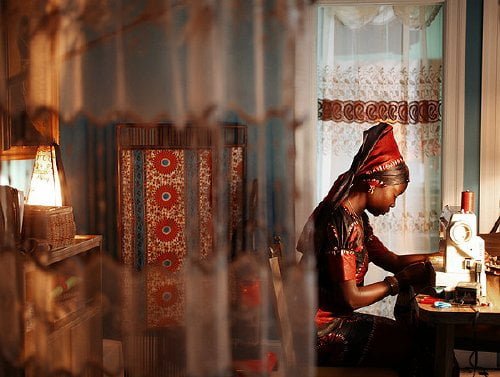 The Brooklyn wedding of Nigerian couple Ayodele (Isaach de Bankolé, "The Limits of Control") and Adenike (Danai Gurira, AMC's 'The Walking Dead') is joyous, and both Ma Ayo (Bukky Ajayi) and Ma Nike (Angelique Kidjo) prepare the bride for her wedding night. But when months later Nike's failed to conceive, her mother-in-law's only goal is that if not she, some woman will become the "Mother of George."

Here's a film that is so immersed in a foreign culture, it is surprising to see it unspool in Brooklyn. The film is stunning to look at. You might recognize the work of "Pariah" cinematographer Bradford Young in a shot where city light lens flare reflects back the shapes and colors in Adenike's African print dress, but his work here, in conjunction with director Andrew Dosunmu and costume designer Mobolaji Dawodu, is more sophisticated. In his striking compositions, shapes and patterns repeat, colors convey meaning (watch how - and when - rust and purple appear in Adenike, Ayodele and Biyi's clothing). The story though, as written by Darci Picoult, is a little thin despite the large emotions it creates for its characters. We can see where everything is headed well before Adenike takes action and the build is slow. Perhaps the coincidence of this Sundance cinematography winner getting its general release on the heels of two foreign films, "The Patience Stone" and "Wadjda," which tell similar stories as they cast wider nets makes it seem slighter. Beginning as it does with a wedding that is meant to introduce us to the players and their culture, we get a sense that the new couple are happy, but not how well or how long they've known each other or how they met. We learn that Ayodele, who runs an ethnic cafe with his younger brother Biyi (Tony Okungbowa), is more open minded that his mother, less bound by tradition. Adenike, on the other hand, is more old-fashioned, as evidenced by her friendship with the more Americanized Sade (Yaya Alafia, "Lee Daniels' The Butler"), who shocks her friend by buying her a transparent blouse. It's a bit hard to get one's head around seeing 'The Walking Dead's' machete-wielding Michonne in such a traditional, submissive role. The actress certainly makes us feel her character's anguish and Dosunmu includes several scenes that display the tenderness of Ayo and Nike's lovemaking. And yet we never really feel the weight of just what's at stake. There is a controversial decision born of love that could easily be seen as anything but by its recipient, but the four younger characters most affected have had their worldviews set too carefully in four corners. The film ends on an ambiguous note that suggests what happens next may be more complex and emotionally rich than what has led up to it.