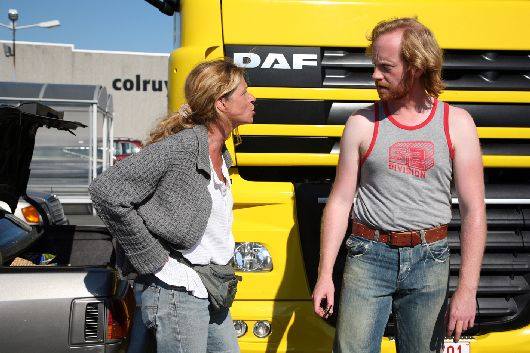 Matty (Barbara Sarafian) is 41, the mother of three and separated from her philandering husband, Werner (Johan Heldenbergh). The troubled woman is, in a word, harried and it does not help when she gets into a fender bender with truck driver, Johnny (Jurgen Delnaet). Their first meeting ends in shouts and insults. Later, though, Johnny visits Matty and volunteers to repair her car, beginning a romance that further complicates her life in “Moscow, Belgium.”

Matty (Barbara Sarafian, "8 ½ Women") is the 41 year-old mother of teenaged Vera (Anemone Valcke) and two prepubescents whose husband Werner (Johan Heldenbergh, "Ben X") is indulging his mid-life crisis with a woman half her age. Stressed out after a long day, Matty is rear-ended in the grocery store parking lot by truck driver Johnny (Jurgen Delnaet), a guy the cops seem to know when they arrive at the accident. Surprisingly, Johnny, who is 29, becomes Matty's persistent suitor and her daughter Fien's (Sofia Ferri) tarot cards advice her to follow her heart but following one's heart is not always a direct route in Moscow, Belgium. Writers Jean-Claude Van Rijckeghem and Pat van Beirs make many obvious choices with this romantic comedy - the meet cute of unlikely lovers, the tidy pairings of quirky coincidence - but director Christophe Van Rompaey and his engaging cast nonetheless manage to keep things real enough to make "Moscow, Belgium" a perfectly delightful destination. One shudders to think what Hollywood would do with this tale, but Sarafian creates such a down to earth, likeable character that one cannot help but root for her happiness. And despite some typical romcom moves, Rompaey and his writers give her a bumpier road than most. Johnny, amusingly described throughout as a Viking, has a past that butts its head in (a little too conveniently) just when things seem great. Werner, whom Heldenbergh plays as a selfish ass who nonetheless still obviously cares for Matty, is always on the verge of coming back, the resolution Matty wishes for. Vera is not your typical teen and the mother-daughter relationship depicted here is an interesting sideline to the main action. Matty's workplace, the post office, is a good gathering place for colorful characters such as funeral parlor owner Mr. Jacques (Bob De Moor) and the older woman who observes that 'the best thing to do with men is put them in the garden to scare the birds.' "Moscow, Belgium" is a terrific vehicle for Sarafian, an actress who proves that middle age can still be intriguing and sexy. She doesn't bloom by taking off her glasses or letting down her hair, but by looking anew at how the years have treated her.