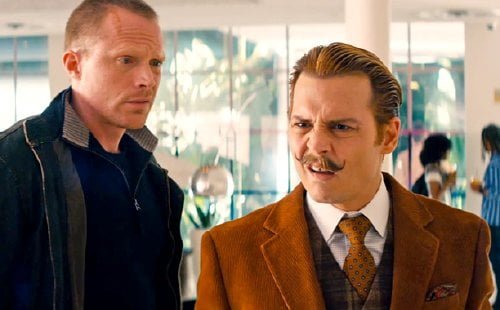 An English aristocrat who deals in art, Lord Charlie (Johnny Depp) is struggling under a pile of debt as his domineering wife Johanna (Gywneth Paltrow) blithely puts family heirlooms up for auction. He's hired to down a lost Goya which may contain the number of Hermann Göring's Swiss bank account, a Nazi fortune that international terrorist Emil Strago (Jonny Pasvolsky) is eager to get his hands on, by MI5's Alistair Martland (Ewan McGregor), the man who still carries a torch for Johanna and despises "Mortdecai."

Despite advance buzz painting this one a bomb and a general disappointment in Depp's career choices of late (ones which paint the actor more akin to a kid with a toy box than a serious actor), "Mortdecai" isn't nearly as awful as I'd expected. Depp, wearing a moustache with a part like drapery for his upper lip, gapped front teeth, blondish locks and a goofy 'English' accent punctuated with purring hums, is an effete con man with no predilection for manly activities such as running, shooting or fighting. Those fall to his scarfaced manservant 'thug' Jock Strapp (Paul Bettany, "Transcendence"), constantly reassuring his employer that his accidental injuries at the man's hands are of no concern. Depp and Bettany are like an English variation on Inspector Clouseau and Cato. David Koepp ("Secret Window," "Premium Rush"), who directed but did not adapt the screenplay ("On the Line's" Eric Aronson reworked Kyril Bonfiglioli's novel 'Don't Point That Thing at Me'), keeps things moving at a zany pace even if many of the jokes aren't quite funny enough. Most revolve around Mortdecai's abnormal attachment to his new facial growth despite the love-of-his-life's physical revulsion, a gag that has Gywneth gagging followed by Depp's sympathy reflex. Their sexual stalemate allows Johanna to keep Alistair dangling and Charlie jealous. Then there's Jock's insanely strong sexual magnetism which perplexes his boss. As the duo zip about the globe ('3D' renderings of cities spring disproportionately from a globe connected by plane travel), they'll discover not all is what it seems with murdered art restorer Bronwyn, fellow art dealer Sir Graham (Michael Culkin, "The Hours"), Rolls mechanic Spinoza (Paul Whitehouse, "Corpse Bridge," "Alice in Wonderland"), American billionaire Milton Krampf (Jeff Goldblum, "Le Week-End") and his nymphomaniac daughter Georgina (Olivia Munn, HBO's 'The Newsroom'). Russian art collector Romanov (Ulrich Thomsen, "The Celebration," Showtime's 'Banshee'), on the other hand, is quite clear about his tortuous agenda. "Mortdecai" is a very silly movie with a game cast and their commitment is occasionally catching. Grade: