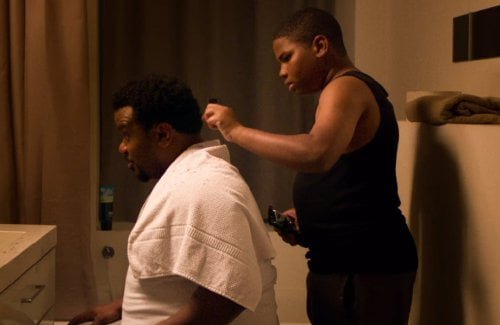 Following the recent death of his beloved wife, Curtis (Craig Robinson) relocates to Heidelberg Germany with his 13-year old son, Morris (Markees Christmas), who longs for home in America. The African-American boy has a hard time fitting in with his new German peers at school and turns to his hip-hop music for comfort in “Morris From America.”

It isn't surprising that a 13 year-old Black boy from Falls Church fancying himself a gangsta rapper sticks out like a sore thumb in Heidelberg, Germany. His widowed dad Curtis (Craig Robinson, TV's 'The Office,' 'Mr. Robot'), whose job has taken them there, tries to help, getting the boy language lessons from college student Inka (Carla Juri, "Wetlands") and encouraging him to join a Heidelberg youth group. While most of the kids taunt him with 'Kobe Bryant,' the beautiful older blonde Katrin (Lina Keller) takes an interest in "Morris From America." Writer/director Chad Hartigan ("This Is Martin Bonner") puts an unusual spin on his coming-of-age tale by marrying it to the 'stranger in a strange land' genre, but it is the acuity of his casting seals the deal. Newcomer Markees Christmas ably shoulders the film with a charismatic performance embellished with hilariously unique reactions to the cultural differences he encounters. Robinson joins the pantheon of best movie fathers in cinema, his Curtis a true friend to his son without losing parental authority as Hartigan charts a parallel story for the adult grieving the loss of his wife as his son makes his first moves. Morris has a quirky, teasing relationship with Inka, but he mostly stays to himself. With his head filled with rap and hip hop, he imagines the tourists and art within Heidelberg Castle all bopping along to the beat. But when Katrin begins to talk to him, his timing's thrown off. He does have the wherewithal to ask her if she has a boom box. Sitting in the fifteen year-old's room, they listen to the cassette grandma sent, a 1990's recording of dear old dad rapping. Kristin's impressed, but her mother is alarmed when she sees her daughter's guest. Morris misinterprets Katrin's playfulness at a party, dismissing the lot as 'German dickheads,' but she persists. Her friendship confuses Morris, especially when he sees her with Per (Jakub Gierszal, "Dracula Untold"), a techno DJ, but it leads him to some very unexpected places. Hartigan, who won the 2016 Sundance Waldo Salt Screenwriting Award, has crafted a film full of charm without skirting tougher issues. Morris's sexual awakening is illustrated when he dresses a pillow in Katrin's sweater, a scene both fanciful and raw that is paralleled when Curtis calls one of the numbers in the nudie magazine he finds in his son's room, crude sex talk driving him to the picture of his wife kept on the fridge. When Morris, already chastised once for coming home too late (dad also grounds the kid for 'bad taste in music') goes way over the line, Curtis is at his most understanding. 'It's always a girl,' he says, relating a bit of craziness in his own past (Robinson also won a Sundance prize for his warm, affecting performance). "Morris From America" is a genre film that feels miraculously fresh. This lonely father and son duo will steal your heart. Grade:

I did not know what to expect from “Morris from America,” having little knowledge about the film except that it co-stars the likable Craig Robinson. I was not prepared for the absolutely charming performance by young newcomer Markees Christmas as Mo. His is a coming-of-age story as he tries to navigate the tricky roads of adolescence in a new country and romance, too. The romance part is in the persona of Katrin (Lina Keller), a pretty, slightly older girl in Mo’s school. The bewildered teen is confused by the mores of German teen life and is only gradually coaxed to open up to different things, like Euro Techno Pop versus American hip-hop, by Katrin. But, Curtis is a strong and loving father and he and Morris bond to help them both get through the difficult times after the far too early death of wife and mother. The two characters, father and son, are given near equal shrift with just a bit more focus on the titular character, as they, together and separately, maneuver through life in their adopted country. Craig Ferguson gives Curtis full dimension dealing with being a widower and single father in new and different foreign land. Markees Christmas is a fully formed young actor, here, and he gives a strong and convincing performance. Supporting cast is slight with only Katrin and Morris’s German tutor. Inka (Carla Juri) given much screen time. The Heidelberg locations are used to good effect to show the foreignness that Morris must come to grips with. His loner nature is slowly cracked by Katrin, the free spirit, as she tries to break him out of his shell. Sometimes, though, her more mature behavior gets Mo in hot water with his dad, making for some terrific, and often funny, father and son scenes. “Morris of America” brings hitherto unknown (to me) writer/director Chad Hartigan to our attention in a well-written, finely crafted story with two notable performances by its leads. This gives us a few things fro us to look forward to in the future, especially Markees Christmas and, of course, Mr. Robinson, too.