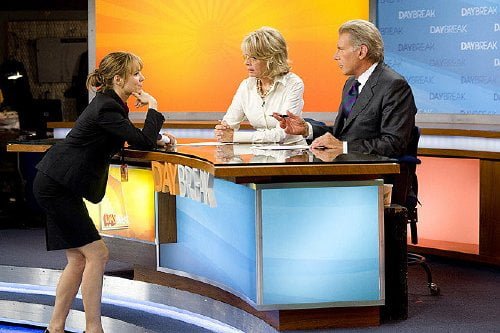 Becky Fuller (Rachel McAdams, "The Notebook," "Sherlock Holmes") is a local news producer when she gets her stab at the big time - producing New York City's lowest rated national morning show 'Daybreak.' She takes a gamble and pairs up veteran host Colleen Peck (Diane Keaton) with revered anchorman Mike Pomeroy (Harrison Ford), who resists Fuller's every attempt to get him to banter or cook on the air. Becky's formula will either turn out to be her undoing or her "Morning Glory."

Director Roger Michell ("Notting Hill," "Venus") has a solid track record and he's assembled a fine cast, but they can't quite overcome the failings of Aline Brosh McKenna's ("The Devil Wears Prada," "27 Dresses") predictable script. Still, "Morning Glory" is certainly a cut above what passes for romantic comedy these days. Just don't expect "Broadcast News." Convinced of a huge promotion in the offing, Becky's New Jersey morning show coworkers present her with a 'Yes, I Accept!' tee, one which she must cover when her boss informs her she's being let go. The overly effusive Becky then manages to convince IBS news head Jerry Barnes (Jeff Goldblum) that she's the one who can turn around his failing 47 year-old 'Daybreak' (even if she fails to convince us). Her first move does gain her attention and support, though. As if proving herself a decision maker at her first production meeting isn't enough, she fires co-anchor Paul McVee ('Modern Family's' Ty Burrell), a seriously slimy individual. In what seems to be at least a week where the disgruntled Colleen is left to shoulder the show alone, Becky and Lenny Bergman (John Pankow, TV's 'Mad About You,' "Bride Wars") set out to find a new anchor. Venerable newsman Mike Pomeroy is just sitting on the bench and when Becky finds a contract loophole that will cost him $6 million if he turns the job down, he takes it, but refuses to do anything that's not hard news, especially if it involves the word 'fluffy.' It's also obvious that Pomeroy won't exactly take to his cohost, a former Miss Arizona who understands banter. Becky, who's so career oriented she has no personal life, also scoops the attention of Adam Bennett (Patrick Wilson, "Little Children"), an IBS weekly newsmagazine producer who thinks Pomeroy is the 'third worst person in the world.' Like Barnes, Bennett is inexplicably taken with Becky's nervous chatter and they quickly fall into bed. Good thing the actors have some chemistry because the pairing plays more like a series of one night stands than a relationship. Like the love affair, the film's pacing is very choppy and the humor is unevenly employed. The film's biggest laughs come in two montages - the first when Becky, on the verge of cancellation, finally shakes things up; the second when Pomeroy and Peck's verbal sparring begins to appear on-air. But her big innovative move to save the failing show is to put the weatherman on a roller coaster instead of in front of it, the same old stuff the Today Show, pictured here as wanting to hire her away for her youthful pizzaz, has been doing for years. And the film's so focused on Becky's battles with Mike that Keaton's Colleen is given short shrift. The film's conclusive message, the news anchor humbled to a cooking segment, is a depressing albeit realistic one. Still, it might have been more socially uplifting - and inventive - to feature Mike combining the two, dubbed a 'bran doughnut' by Becky. Still Ford nails the foreshadowed scene. He hasn't been this entertaining in years, actually, and that in and of itself gives "Morning Glory" a pass. McAdams, who comes *this close* to reproducing Mary Tyler Moore's beret toss, is a force of nature and it's hard not to root for her even when the script isn't really holding Becky up. Keaton's also perfectly cast, a disgruntled pro whose visage transforms the second before a camera rests upon it. The always wonderfully weird Goldblum snaps as Becky's tousled boss and Pankow is a likable contrast to Becky's workaholic, an affable, dedicated worker whose values recognize family first. Matt Malloy ("Choke," "The Bounty Hunter") and J. Elaine Marcos are sitcom funny as Daybreak's additional on-air talent. Elaine Kaufman, Morley Safer, Bob Schieffer and Chris Matthews are on hand as themselves to shore up Ford's fictional legendary status. "Morning Glory" could have been so much better, but the perfectly cast players keep it from being so much worse. It uses the world of network news instead of digging into it.