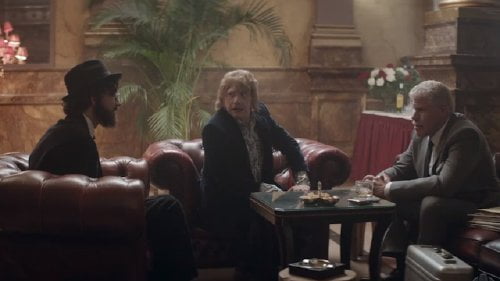 1969. The Apollo 11 moon launch is imminent and there are those, high up in the US government, who are skeptical that the landing can actually happen. To hedge their bets, they send CIA agent Tom Kidman (Ron Perlman) to London to find and convince reclusive film director Stanley Kubrick to stage and film a fake landing, just in case, in “Moonwalkers.”

"Moonwalkers" is an amusing romp that suffers from some pacing issues. Cinephiles will enjoy playing 'spot the Kubrick reference' throughout.

The faked Apollo 11 conspiracy has been with us for decades – see the 2012 film, “Room 237,” if you want to overdose on the subject – and it is the craziness of this conspiracy theory that has endured for years, along with the JFK assassination. Antoine Bardou-Jacquet makes a fast and funny debut feature, working with a script by Dean Craig, and gives a new twist on the idea of the US government scheme to fool the people of the world about the Apollo mission. (Note: There are still proponents that claim the landing never took place.) Ron Perlman, as PTSD-suffering CIA agent Kidman, plays the straight man in this machine gun paced slapstick satire that ends in a confluence of disparate forces, each with a different agenda. Rupert Grinch is Jonny Thorpe, the manic and not very good band manager in way over his head when, in a case of mistaken identity, he agrees to take the CIA man’s money, substituting his stoner friend Leon (Robert Sheehan, who steals the show every minute on the screen) for the famous Kubrick. Things seem to fall in place – until the London mob wants a piece of the pie. While “Moonwalkers” is not a great comedy, it delivers its laughs through the course of the film and leaves you with a smile. At a time where we are still ingesting the catalog of films from 2015, this conspiracy theory comedy is a fun diversion from all the serious stuff out there. And, the filmmakers take the time and effort to pay homage to the great Stanley Kubrick