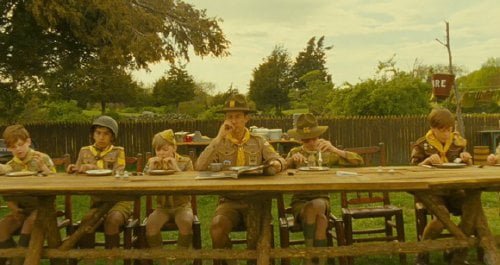 It is 1965 and Sam Shakusky (Jared Gilman) is at the Khaki Scout camp with his troupe on the island of New Penzance off the New England Coast. A year before, he met Suzie Bishop (Kara Hayward) and they became pen pals and, over time, the 12-year olds fell in love. Now, they conspire to escape their separate homes and meet in a meadow to begin their adventurous journey to find the “Moonrise Kingdom.”

In 1965 as summer draws to a close on the island of New Penzance, we're told a legendary storm is approaching and will hit three days hence. In the interim, the least popular khaki scout in Scout Master Ward's (Edward Norton) troop, Sam Shakusky (newcomer Jared Gilman), has written a letter of resignation and set off to meet Suzy Bishop (newcomer Kara Hayward), the twelve year-old girl he's been corresponding with. A year earlier, he was smitten when he first set eyes on her in her dressing room before a church production of 'Noye's Fludde.' Sam prides himself on his survival skills and has mapped out a route along a Chicksaw trail that will take them to a magical inlet he calls "Moonrise Kingdom." From the opening shot of a cross-stitched house hanging on a wall of the home it pictures, "Moonrise Kingdom" is unmistakably a Wes Anderson film and it is his best film since his best film "Rushmore," his only other movie to focus on children on the threshold of an adult world. The Anderson touchstones abound, from the cross-sectional introduction to the Bishop home (a la "The Life Aquatic with Steve Zissou") to the off kilter but just right musical choices (like Suzy and Sam's themes of Francoise Hardy's 'Le Temps de l'Amour' and Hank Williams's 'Kaw-Liga'). The film has been art-directed to a fare-thee-well from Walt Bishop's (Bill Murray) WASPy crazy-quilt plaid pants to those old plaid bean bag ashtrays found on the TV trays of boomers' childhoods. If plaid is a pattern of choice (check out those khaki scout tents), yellow, orange and green are the film's prominent colors, perfectly evoking summer turning into fall. As maps are a constant throughout, we are given the lay of the land by narrator Bob Balaban, bearded and set against the elements in a red rain slicker. In the Bishop house, the three boys are listening to 'The Young Person's Guide To The Orchestra' on a portable record player while Suzy reads in a window seat. At Camp Ivanhoe, Scout Master Ward runs inspections before discovering that Sam's tent, zipped closed from the inside, is vacant. Ward reports his missing camper to Captain Sharp (Bruce Willis) who then pays a visit to the Bishops where Anderson makes it clear that Laura Bishop (Frances McDormand) is having an affair with the officer and that her husband seems to know this. Meanwhile, Suzy, a younger incarnation of Margot Tenenbaum, meets Sam in the specified field and allows his expert guidance to get them to the promised land where they will swim in the sea and dance and where Sam will make her the subject of one of his (in)famous nudes. This last scene evokes "Titanic," just as a later scene of scout warfare in the woods recalls a more adult one in "Inglourious Basterds." Here Anderson is influenced by others' work rather than the overt name checking used in Max Fischer's plays. But above all is his emotionally true drollery - this love story between an unwanted orphan and misunderstood tween is genuinely touching, as is the melancholy of the film's two male authority figures. While Sam and Suzy 'honeymoon,' Laura reevaluates, Ward anguishes over his lost charge's history and Sharp wrangles with Social Services, personified by Tilda Swinton in Salvation Army-like attire. As the adults fret over Sam, his whole troop, having changed their minds about him, disappears to bring him and Suzy to the scout Fort across the channel where Cousin Ben (Jason Schwartzman) agrees to marry them before they make their second getaway. As with all Anderson films, the basic story is just a hanger for characterizations and continuing themes, like parental infidelity and loss (Anderson cowrote with his "Darjeeling Limited" partner, Roman Coppola). The minutiae of small town bureaucracy reflects Anderson's sense of order - Rushmore's clubs are Moonrise's scout badges, its school rules reflected here by Social Services rigidity. We learn a lot about Captain Sharp when we discover he lives in a 50's era trailer on an island with no paved roads and much about Bishop family life from mom Laura's communication via megaphone. The sea creatures of Zissou and animals of "Mr. Fox" are reflected in the medieval reenactment of Noah's Ark (which also foreshadows the looming storm), where Suzy is a raven. But where "Rushmore" was perfection, "Moonrise Kingdom" has a few jarring moments, like the obvious dummy double used in Ward's rescue of Commander Pierce (Harvey Keitel) and the stormy climax atop St. Jack's Church which screams sound stage. Tilda Swinton's alienness is also alienating, her character's otherness not quite meshing with the tone the rest of the cast is pitched to. Anderson's gotten delightful performance from his huge cast of kids, with Gilman in particular a real find, a confident outcast. Fabulous faces earn the names of Izod, Roosevelt and Lazy Eye. "The Innkeepers'" Jake Ryan has a knack for milking a line as Suzy's younger brother Lionel. But the film's most affecting performance comes from Ed Norton, a scout master so devoted he calls his career teaching elementary math his 'part time' job. Norton's got heart (his commendation on Sam's campsite is priceless). "Moonrise Kingdom" is a lovely little film about love, l'amour beneath a pitched tarp.

Young Chiron (Alex R. Hibbert), named Little by the bullies at his school, grows up in a tough neighborhood in Miami. We watch the boy grow into a troubled teen (Ashton Sanders), who has an identity crisis, and, then, into a man now named Black (Trevante Rhodes) in “Moonlight.” This personal chronicle, by director/writer Barry Jenkins with a story by Tarell McCraney, follows the life of Chiron in three chapters. Little is not just bullied at school. His mother, Paula (Naomie Harris), divorced from his father, who made a new life for himself, is a crack addict and the boy must deal with her addiction daily. Little grows into teenage Chiron but life is not much better. He is still bullied at school and Paula is still an addict, who demands any money his father gives him to feed her habit. Chiron has but one friend, Kevin (Jharrel Jerome), until something happens that estranges the two. Grown up Black has gone full circle, dealing in the drugs that addicted his mother when he was a boy. He is still troubled and a loner until, years later, he gets a call out of the blue from Kevin (Andre Holland). Kevin, now a chef, invites Black over to make him dinner…. The life and times, in three parts, of one boy, troubled and put upon Chiron, who grows into a troubled man. His entire life has been dominated by his mother and her addiction. Naomie Harris gives a powerhouse performance as Paula and has a significant character arc. The trio of actors portraying Chiron at his three life stages are each only given a limited time on screen but each fully flesh out Chiron with a flow that is believable from one stage to the next. Sophomore feature director Barry Jenkins does a solid job marshalling his talented cast and tells a compelling coming of age story. Chiron’s is not an easy life and we see how all the things that happened when he was just a young boy formed him as a teen and, in turn, helped shape him as a man. Chiron’s life experiences have almost all been bad but, in the end, the character is given a glimmer of hope and possible happiness.