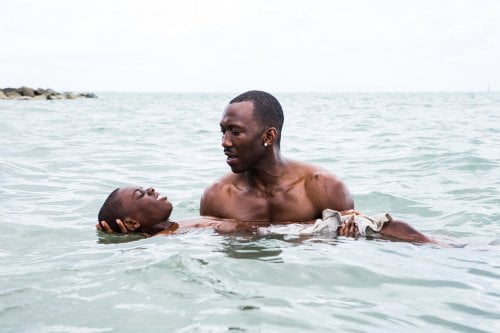 Ten year-old Chiron (Alex Hibbert) is a quiet, anxious boy living with his single mom Paula (Naomie Harris, "Skyfall") in Miami's Liberty City housing project. Dubbed 'Little,' the boy is unsure of himself and frequently bullied, but is taken under the wing of local drug dealer Juan (Mahershala Ali, "Free State of Jones") who tells him about his Cuban childhood and nickname, Blue, gotten from an old woman who told him black boys look blue in the "Moonlight."

Writer/director Barry Jenkins ("Medicine for Melancholy") sensitively examines the maturation of one black youth struggling with his identity and those who shaped him. Three actors play the character in three acts, each named by the boy's current persona - Little, Chiron and Black. Painting with tropical light, cinematographer James Laxton ("Camp X-Ray") makes us feel the softness of an evening breeze and the coziness of a late night diner while composer Nicholas Britell's ("The Big Short") quiet orchestral themes lend an air of melancholy reflection. The story was adapted from a class project by playwright Tarell Alvin McCraney. As Little's mom slips further and further into addiction, the child spends more and more time with Juan and his stabilizing and maternal girlfriend Teresa (singer-songwriter Jonelle Monáe). He also finds a more age appropriate friend in Kevin (Jaden Piner), a classmate who brushes him off after a bullying incident and tells him he needs to stick up for himself. Juan gives him a sense of himself by telling him about black history. He teaches him to swim. But there is the painful irony that it is Juan who sells Paula the drugs that make Little's life hell. At the end of Part 1, Little confronts Juan with painful questions ('What's a faggot?' 'Do you sell drugs?'). To his credit, Juan is truthful. Part Two, Chiron, finds the boy (Ashton Sanders, "Straight Outta Compton") at 16 still being bullied by Terrell (Patrick Decile). He spends evenings with Teresa when his mom throws him out, but she finds him on his way to school, demanding the money she knows Teresa gives him. Kevin's (Jharrel Jerome) now a lady's man and Chiron dreams of his sexual exploits. When he finds his friend on the beach a romantic gesture is returned, but the next time he sees him he's under Terell's sway and Chiron neglects to follow his youthful advice. Beaten, he finally exacts revenge against his true tormentor and irony once again befalls Chiron. After a second fade to black we meet Black, the early 30's incarnation of Chiron (Trevante Rhodes), now a drug dealer himself, sporting Juan's do-rag, Kevin's diamond stud and his own grills. We barely recognize this Chiron, now a big, well-muscled adult living in Atlanta, but he's still quiet and withdrawn. After promising his ma a visit he gets a more unexpected call. Kevin (André Holland, 'The Knick'), who hasn't spoken to him in all these years, was wondering how he's doing. At the end of a kindly if awkward conversation, Kevin, a cook in Miami, offers to make him a meal should he ever come home. After visiting the now reformed and contrite Paula in rehab, Chiron hits the road. If his lead character is tentative, Jenkins is surely not. He almost cradles his subject, his direction assured yet delicate, in tune to the moments that define a life. The three actors who play Chiron don't really resemble each other, but Jenkins has us so invested in the boy's fate it doesn't matter. As good as they all are, it is Holland who makes the strongest impression, the director's alter ego in guiding this young man towards the light. But although we learn Chiron's truth, Kevin's is more slippery, a gentle acceptance which may mean more but may not (the same may be said of Teresa, a Church going saint of a woman paired with a drug dealer). Also outstanding is Naomie Harris whose Paula slides from working single mother into decades of addiction and out again, her final scene with Chiron a healing balm. Grade:

Young Chiron (Alex R. Hibbert), named Little by the bullies at his school, grows up in a tough neighborhood in Miami. We watch the boy grow into a troubled teen (Ashton Sanders), who has an identity crisis, and, then, into a man now named Black (Trevante Rhodes) in “Moonlight.” This personal chronicle, by director/writer Barry Jenkins with a story by Tarell McCraney, follows the life of Chiron in three chapters. Little is not just bullied at school. His mother, Paula (Naomie Harris), divorced from his father, who made a new life for himself, is a crack addict and the boy must deal with her addiction daily. Little grows into teenage Chiron but life is not much better. He is still bullied at school and Paula is still an addict, who demands any money his father gives him to feed her habit. Chiron has but one friend, Kevin (Jharrel Jerome), until something happens that estranges the two. Grown up Black has gone full circle, dealing in the drugs that addicted his mother when he was a boy. He is still troubled and a loner until, years later, he gets a call out of the blue from Kevin (Andre Holland). Kevin, now a chef, invites Black over to make him dinner…. The life and times, in three parts, of one boy, troubled and put upon Chiron, who grows into a troubled man. His entire life has been dominated by his mother and her addiction. Naomie Harris gives a powerhouse performance as Paula and has a significant character arc. The trio of actors portraying Chiron at his three life stages are each only given a limited time on screen but each fully flesh out Chiron with a flow that is believable from one stage to the next. Sophomore feature director Barry Jenkins does a solid job marshalling his talented cast and tells a compelling coming of age story. Chiron’s is not an easy life and we see how all the things that happened when he was just a young boy formed him as a teen and, in turn, helped shape him as a man. Chiron’s life experiences have almost all been bad but, in the end, the character is given a glimmer of hope and possible happiness.