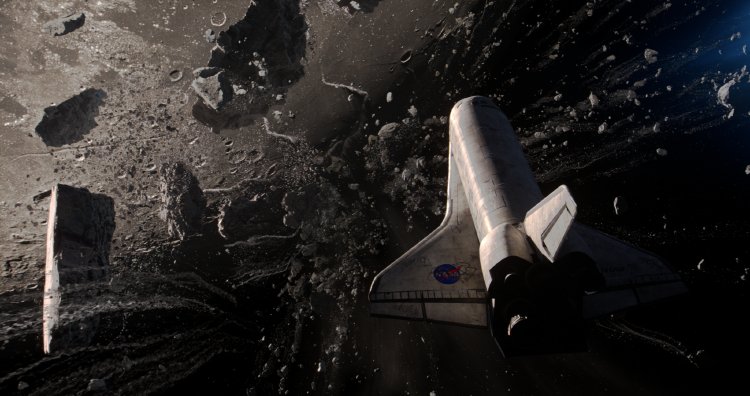 As it turns out, the Apollo 11 moon landing mission covered up an incredible secret, one which may be the root cause for the satellite being knocked off its orbit in 2022.  With the moon heading straight for Earth where panicked chaos has ensued, NASA executive and former astronaut Jo Fowler (Halle Berry) enlists old colleague Brian Harper (Patrick Wilson) and conspiracy theorist K.C. Houseman (John Bradley) on a dangerous journey to prevent “Moonfall.”

Director Roland Emmerich loves nothing more than large scale destruction, disaster movies sometimes tinged with science fiction ("Independence Day") or conspiracy theories ("2012").  Here he’s combined both, leaning on the ‘hollow’ or ‘spaceship’ moon conspiracy theories for a rag tag team of heroes to blast off to accomplish the impossible while their loved ones face the cataclysmic results of tidal and gravitational forces gone haywire.

A 2011 prologue sets the stage.  On a routine satellite repair mission, Harper and Marcus work in space while Jo commands their shuttle.  Marcus says Brian and Jo, who are squabbling over the lyrics to Toto’s ‘Africa,’ sound like an old married couple.  Suddenly an undulating storm of black buzz engulfs them all, setting the shuttle to spinning.  Brian makes it back inside, finds Jo unconscious and manages to stabilize the ship, but Marcus is gone.  The one time hero who landed a shuttle with no electronics is fired by NASA, his story given no shrift.

Ten years later Jo is second in command to NASA’s Albert Hutchings (Stephen Bogaert, “It”) and a single mom, having divorced her son Jimmy’s (Zayn Maloney) father, high ranking military officer Doug Davidson (Eme Ikwuakor).  Brian is also divorced and overdue on his rent by several months when he gets a call from his ex to turn on the TV where their son,  Sonny (Charlie Plummer, “Lean on Pete”), is being arrested after a high speed chase with police.  K.C., a hollow moon theorist, is introduced as a janitor at the University of California, Irvine, where he routinely assumes the identity of Professor Arrowood by hacking into the old man’s computer and who has come across evidence that the moon has been knocked out of its orbit.

After having had a prior run-in with K.C. when the young man co-opted his ‘Astronaut Day’ speaking engagement for kids at the Griffith Observatory, Brian runs into K.C. again as Los Angeles is flooded by a tsunami that sends ships crashing into buildings.  Having returned to find the young man’s notes after having him thrown out, Brian now knows K.C. was really onto something with his moon ramblings and the duo team up to get NASA to listen.  Meanwhile at Houston’s Johnson Space Center, Hutchings has turned rat leaving sinking ship while Jo discovers Brian was telling the truth 10 years prior when she views the highly classified video recorded by his space helmet (Donald Sutherland appears out of the shadows for a minute to collect a paycheck and exemplify U.S. government cover-ups).  Brian is eventually reunited with his ‘work wife’ while both worry about getting their sons to safety, K.C. along for geeky comic amusement.

The ‘solution’ these three come up with is seriously insane, the Endeavor Shuttle, complete with profane moon graffiti scrawled on its nose, taken from a museum to be shot into space before a tsunami hits, presumably with no flight plan, mechanical checks or anything else resembling reality.  Meanwhile, on land, Sonny’s high speed chase incident comes into play as he has to outrun gun toting psychos trying to get Jimmy and his nanny Michelle (Yu Wenwen) to Doug waiting at a high security Colorado bunker, first stopping to reconcile with stepdad Tom Lopez (Michael Peña).

This is the kind of goofy fun we expect from Emmerich, along with such “2012” sights as mass flooding and snowy mountain peaks crumbling before an encroaching moon.  But the cutting among the separate story strands is ham-fisted and the film bogs down considerably in space where a trip inside the moon reveals a humdrum back story and overly convenient escapes.  And if it seems coincidental that Brian reunites with K.C. at the exact same L.A. hotel when all hell breaks loose, just wait until the ending where a space capsule lands right in the path of its occupants’ families trudging through the snow, a military copter circling conveniently overhead.


Lionsgate opens “Moonfall” in theaters and on IMAX screens on 2/4/22.