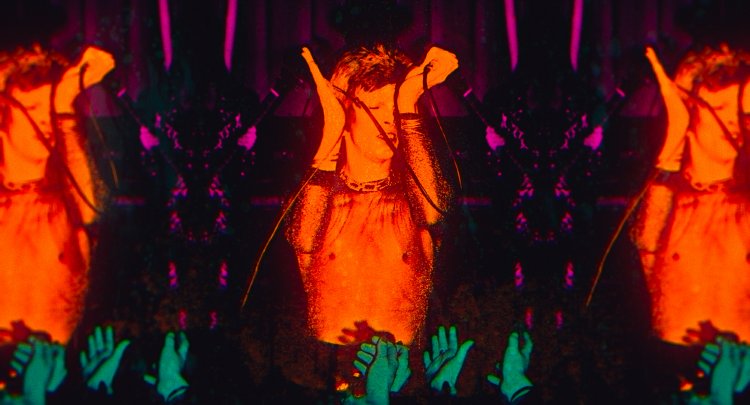 After opining on Nietzsche’s quote about god being dead and humans needing to take his place, David Bowie states that with Ziggy Stardust he wanted to define the rock star as Messiah using Kabuki theater, mime techniques and fringe NY music.  Immerse yourself in the art and philosophies of perhaps the greatest artist of the 20th century in the time-tripping, kaleidoscopic experience that is “Moonage Daydream.”

A couple of years ago Alex Winter was given access to the entirety of the works of Frank Zappa by Zappa’s wife, a voluminous treasure trove of work, from which he created an extraordinary documentary.  Now writer/director/editor Brett Morgen ("Cobain: Montage of Heck") has been given the same opportunity, but instead of Zappa’s output, he’s been allowed the keys to the more sprawling world of one David Jones by the Bowie estate.  Morgen spent four years assembling the film, using vast resources of unseen footage and artwork (the paintings!), then an additional year and a half on the soundtrack (along with Bowie’s music producer Tony Visconti) and animation and all that effort is apparent on screen.  This one deserves to be seen on an IMAX screen if at all possible.

Morgen rarely allows anything to run for any extended period of time, cutting together a piece of a song from multiple performances and layering in interview clips.  We hear Dick Cavett’s extraordinary introduction of the man on his talk show yet we’re seeing Ziggy Stardust approach the stage and his adoring fans (it is somewhat surprising to see the Beatles-like frenzy which greets the fledgling rock star).  In a witty montage, Morgen cuts together snippets of drab 70’s British weather and news reports culminating in a talk show overwhelmed with the spectacle that is Bowie in his bright orange mullet, blue eye shadow, glittery gold socks and toeless red platforms.  And he positively charms.

The documentarian appears to use Bowie’s own words for inspiration, the artist stating that he’s drawn to isolation and that isolated characters create a micro-world inside themselves, some schizophrenic (like the older half-brother Terry who shaped his youth and is referenced by “Aladdin Sane”).  Later we will hear him embrace ‘chaos and fragmentation’ and voila, Morgen has his blueprint, albeit a very work intensive one.  One assembled collage of all the influences (‘outside things’) introduced to Bowie by Terry is like a sepia toned Sgt. Pepper album cover while many of the overlaid animated cutouts are reminiscent of Terry Gilliam’s work with Monty Python.  Bowie’s own movie roles are featured while clips from such titles as ‘A Trip to the Moon,’ ‘The Wizard of Oz’ and ‘In the Realm of the Senses’ all comment on the subject at hand.

The restless rock star’s world travels are integral, trailing cameras observing him disappearing into low profile neighborhoods.  He believes discomfort aids creativity and, hating L.A., moved there.  Berlin represented a restart with Brian Eno, an attempt to create music in new ways.  The film builds up to his newfound 80’s popularity with ‘Let’s Dance’ and the Serious Moonlight tour.  One critic calls the new album a ‘side step, nothing new’ and says Bowie’s become something ‘old-fashioned, a superstar.’  Bowie, in turn, notes ‘I don’t begrudge anyone an audience.’

This ‘comeback,’ if you will represents this film’s climax, if it can be said to have one.  Bowie’s decades of deflecting the idea of a romantic relationship comes to a crashing halt when he meets the love of his life, Iman.  ‘Earthling’ and ‘Outside’ are dealt with quickly before we confront Bowie’s death once again with ‘Blackstar.’  Those who are not fans of the artist will likely not be as enamored of this nontraditional approach, but it is a revelatory and ground-breaking slant on the musical biopic documentary, one which reflects its continually evolving subject.