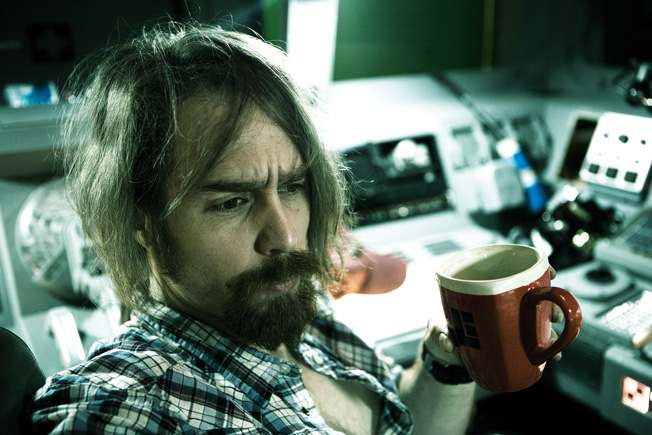 As we see his story being turned out by rows of typists picking up where another left off on machines moving down rails, Colin (Romain Duris, "Populaire") is in his quirky abode, where servant bells scuttle about like insects and his cook Nicolas (Omar Sy, "The Intouchables") battles eels coming out of kitchen faucets. His friend Chick (Gad Elmaleh, "Capital") stops by to sample a cocktail devised by the notes played on a piano and when Colin learns he's scooped up Nicolas's niece Alise (Aïssa Maïga, "Caché"), Colin wants a girlfriend of his own. At a party, he's awkward meeting Chloé (Audrey Tautou, "Amélie"), but the two get married quickly only to discover a water lily has implanted itself in her lung in "Mood Indigo." Cowriter (with Luc Bossi)/director Michel Gondry ("Be Kind Rewind") came onto the scene directing "Eternal Sunshine of the Spotless Mind," which he cowrote with Charlie Kaufman. Since then, his brand of retro fantasy hasn't worn well. In adapting Boris Vian's novel, Gondry fills the screen with imaginative visuals - stop motion animation, a cloud vehicle, a picnic in a plexiglass limo - but the story of a man losing everything to save his wife lacks resonance. "Mood Indigo" plays like the creation of Wes Anderson by way of Terry Gilliam with the emotional gravitas of Pee Wee Herman. The screen bursts with so much visual information, one begins to feel weary from the start. But while Gondry settles down for stretches, Duris and Tautou remain so much window dressing. Even their wedding is a joke, a 'race' to the altar (against Chick and Alise) in amusement park cars. When the tale takes a tragic turn, one could not care less. The film's had 37 minutes of its 131 minute French running time cut for American audiences, one of the few times the tampering with a filmmaker's vision seems like a blessing (much of what was cut involves the philosophies of Jean Sol Partre, a play on Satre). It's a feast for the eyes, but it leaves one cold.

Sam Bell (Sam Rockwell) lives a solitary existence on the dark side of the moon running the Lunar Enterprses automated mining complex that collects, processes and ships to Earth helium-3, a safe and clean source of energy. He is nearing the end of his three-year stint on the satellite but things get weird when he starts seeing and hearing things. His life, he discovers, may not be as it seems on the “Moon.” Duncan Jones, son of David Bowie (nee David Jones), makes his feature debut with a calling card that shows his potential as a filmmaker. With his relatively small budget and deft use of CGI, Jones brings an interesting, though derivative, sci-fi tale that deals with the effects of long-term isolation and cloning. The result begins in an intriguing way but, as the film unfolds, the twists of plot turns into the good guys (the Sams) versus the monolithic corporation, Lunar, that runs the helium-3 business on the moon. Because of this, “Moon’s” first half is involving, with the second half rolling to its inevitable conclusion. Sam Rockwell is okay in the duel role of the Sams and delineates the differences and similarities between them. The other principle character, GERTY (voice of Kevin Spacey), is a robotic computer and Sam’s only company. Comparison to HAL in “2001” is obvious and Spacey could have done the voice in his sleep. (And, he may have.) Kudos to Jones and his behind the camera team for producing a good-looking film that uses its computer imaging to good affect. “Moon” is a film that will get the director’s foot in the door for opportunities for bigger and better things to come.