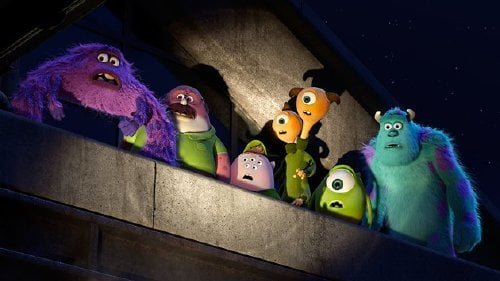 One-eyed cueball Mike Wazowski (voice of Billy Crystal) is filled with determination and dreams of becoming a professional scarer as he heads off to college, but two things get in his way. First is school slacker Sulley (voice of John Goodman), the son of a Monsters Inc. legend, who belittles Mike every chance he gets. The second is Dean Hardscrabble (voice of Helen Mirren) who just thinks Mike doesn't have what it takes. When the two competitors get thrown out of the Scare Program, Mike gambles everything on the Scare Games to get back in, but he has to team up with a fraternity to do so, woeful Oozma Kappa is his only option and they're one monster short. And so Mike's saddled with slacker Sulley and a band of misfits at "Monsters University."

Remember the good old days when a Pixar release was an event, a magical creation full of wit and imagination and beauty? OK, so "Cars" wasn't a masterpiece, but then Disney bought Pixar and their first joint offering was "Cars 2." Last year's "Brave," while it looked stunning, was a formulaic, second tier Disney product. And while it's certainly cute, "Monsters University" rings Pixar's death knell. There's simply little special about it. In imagining what happened before Mike and Sulley worked at "Monsters, Inc.," cowriter (with "Monsters, Inc.'s" Robert L. Baird & Daniel Gerson)/director Dan Scanlon have come up with a buddy comedy based on Mike's drive paired with Sulley's entitled coasting and thrown in a bunch of oddballs whose eventual success will prove uplifting. The Oozma Kappas consist of senior student Don (voice of Joel Murray), a former salesman; the two-headed Terri (voice of Sean Hayes) and Terry (voice of Dave Foley); Art (voice of Charlie Day), the vaguely Muppet-like, most intriguingly designed of the new characters and Squishy (voice of Peter Sohn), a multi-eyed blob. Mike and Sulley are dismayed to learn that their homey frat house is actually the home of Squishy's mom, Ms. Squibbles (voice of Julia Sweeney), when she comes to do laundry in the basement during their initiation ('Just pretend I'm not here' may be the funniest line in the film). Mike has bet the Dean that if he wins he'll be reinstated in the Scare program (if he loses, he'll be booted out of MU). What he didn't bet on was that his entire team has to win. There are five challenges in the Scare Games and five teams. None of the other monsters are remotely interesting (a team of pink cheerleaders?) and only one of the challenges is. The climactic challenge - a scream simulation right out of "Inc." - is the obstacle to Mike and Sully's friendship and it is only after this, in the film's final adventure, that any genuine heart and excitement come into play. We do see some other returning characters. Mike's roommate turns out to be Randy (voice of Steve Buscemi), "Monsters, Inc.'s" bad guy and keep an ear out for Roz. But the MU campus could just as well be "Pitch Perfect's" - where's the whimsy in a college full of monsters? A couple of gags at the very beginning, when various clubs try to recruit the freshmen, work, but otherwise the filmmakers simply place their characters in a human-like world. They even resort to that hoariest of cliches, treadmill slapstick.