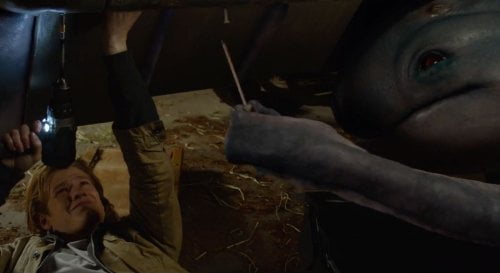 High school senior Tripp (Lucas Till, "X-Men: Apocalypse") hopes to get out of his North Dakota town in the oversized pickup he's built from bits and pieces of scrapped cars. Luck shines on him when an oil drilling accident unearths a strange gas guzzling creature with a need for speed. With his unlikely friend Creech and smitten biology tutor Meredith (Jane Levy, "Don't Breathe"), Tripp finds himself in a battle against Terravex Energy to save the subterranean species who can fuel "Monster Trucks."

There are three 'story by' credits on "Monster Trucks" (screenplay by "Jurassic World's" Derek Connolly), a movie cooked up by a former Paramount chief and his four year old that can best be described as the poor man's "Pete's Dragon" by way of the "Love Bug." Director Chris Wedge ("Ice Age") makes the leap from animation to live action (the film was originally planned as an animation) and gets surprisingly committed performances from his surprisingly recognizable ensemble, but any sense of real world logic and spatial integrity have been jettisoned. Still with its puppy doggish Creech, a type of giant, tentacled manatee with a jovial expression and nasty, tooth-filled maw, and absurdist, high stakes action, "Monster Trucks" should please the kids. Except for its bizarre monster-truck premise, the plot is as simple and familiar as it gets. Terravex (as in 'earth irritated') Energy boss Reece Tenneson (Rob Lowe) is consulted when an oil drill hits water two miles below the earth. Scientist Jim Dowd (Thomas Lennon, "17 Again," "We're the Millers") argues that this could indicate an unknown ecosystem, but he bows once again to Tenneson's orders. When they resume drilling, blowback destroys the entire rig and three large creatures are deposited in the yard. Two are caught, but one escapes. Burke (Holt McCallany, "Jack Reacher: Never Go Back") and his team are tasked with retrieving it without raising suspicions. Meanwhile, Tripp, who is unengaged at school and chafes against his mom's (Amy Ryan, "Gone Baby Gone") boyfriend Sheriff Rick's (Barry Pepper, 2010's "True Grit") presence, is delighted that his junkyard boss Mr. Weathers (Danny Glover) has told him he can have the 425HP engine he's just found in a recent arrival. Just as he's gotten it running, he hears a noise. Then he sees a tentacle. Panicked, he manages to trap the animal and calls Rick. The Sheriff arrives and finds nothing, convinced this is Tripp's idea of a prank. Creech returns and Tripp, more curious now, observes it drinking oil. After saving it from the junkyard crusher, a tentative friendship is formed, but something else again occurs when Creech deposits itself under the hood and undercarriage of Tripp's truck and moves it (the 'scientific' explanation for how this works is lacking, to say the least). When Meredith shows up for a scheduled tutoring session just as Burke arrives, she inadvertently becomes an eco warrior. The evil establishment against innocent creature, most often a dog, is a time worn plot since the beginning of cinema, and "Monster Trucks" adds nothing new to the tale other than goofy visuals of a truck scaling a wall or jumping huge obstacles. No one ever seems to notice the eyes peering out from its wheel well or the fleshy tentacles wrapped around its axles. Characterizations are pretty black and white, Jim and Rick predestined to don white hats. A subplot concerning Tripp's relationship to his deadbeat dad Wade Coley (Frank Whaley, "Pulp Fiction"), a Terravex worker who witnessed the accident, goes nowhere other than to clear Rick's path toward bonding with Tripp. Till looks too old for his role, but creates a focused teen with hidden depths in an engaging performance all the more miraculous considering the silliness going on around him. Bigger names like Ryan and Glover only show up in a couple of scenes. The film's big climax features the most egregious action choreography I can remember, Rick driving a vehicle so massive it almost touches the sides of the rock cliff walls on either side of the road, every bad guy's SUV he smashes into, with nowhere to go, miraculously disappearing via the magic of editing. Grade: