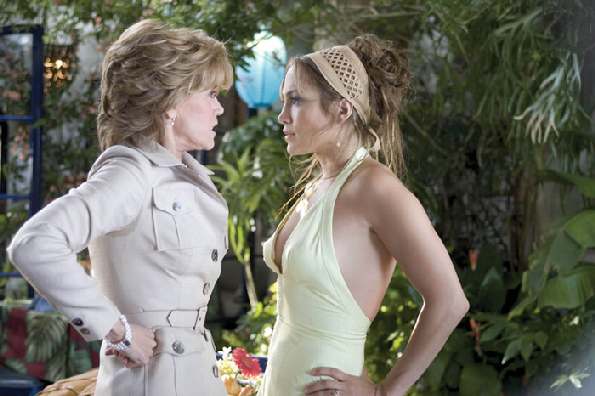 Charlotte "Charlie" Cantilini (Jennifer Lopez, "Maid in Manhattan") is a wannabe artist living on Venice Beach working a variety of jobs. When she sees the same guy twice in one day, she's intrigued; when she finds herself waitressing a party in his home the next, she's convinced by a jealous rival that he's gay. But love finds a way and everything seems wonderful, until Kevin (Michael Vartan, TV's "Alias") takes her to meet his recently pastured media giant mom, Viola (Jane Fonda). Charlie soon realizes she's up against a "Monster-in-Law."

Following in Barbra Streisand's path for last year's "Meet the Fockers," Jane Fonda returns to the screen after fifteen years to play a mother-in-law-to-be. Streisand wasn't gone as long (eight years), but her warm, goofy portrayal elevated her over third rate material. Instead, Fonda has picked a caricature character and she is only as funny as the exaggerated screenplay (by newcomer Anya Kochoff) allows. It's J-Lo who offers the warmth in this pitched battle that loses its purpose. As Charlie's day begins as a dogwalker along the beach, Viola's assistant Ruby (Wanda Sykes, "Pootie Tang") learns with horror that the Barbara Walters-like newswoman is about to be let go. Viola tries to hold herself together for her show, Public Intimacy, but the vapidness of her Brittany-clone guest (Stephanie Turner's Tanya Murphy) brings on an on-air meltdown. After a stint in a sanatorium, Viola thinks an African vacation with her son the surgeon is in order, but instead she is presented with his fiancee - a temp. Viola becomes determined to drive out the interloper. While Kochoff's screenplay does attempt to provide a psychological angle for Viola's meltdown, her tactics become increasingly illogical. As he proved with "Legally Blonde," director Robert Luketic knows his way around a sight gag and has experience playing up outrageous costumes and dogs, but he lets too many story flaws slip through. First and foremost is allowing Kevin to be the type of loser who would propose in front of his mother - a bridegroom's action that should send the bride running before his mother even begins to plot. Inconsistencies regarding Viola's relationship with alcohol - one minute Ruby's locking the liquor cabinet, the next proposing cocktails - could have easily been cleaned up. Cliches abound as well, from the upstairs gay neighbor/best friend to the bitchy ex-girlfriend (Monet Mazur, "Torque") mom throws between her son and his intended. Some of the gags are funny, such as J-Lo's good-naturedly allowing herself to be the butt of a too small dress joke and Fonda plopping face forward into a bowl of tripe, but the machinations at a rehearsal dinner either lead nowhere or go too far. An overly sappy ending stretches credulity. Lopez is natural playing a sweet-natured girl while Fonda is brittlely amusing, an over-the-top diva just begging to be brought low. Vartan is thoroughly bland, a romantic catch by dint of looks, occupation and understatedly stunning home alone. The real comedic chops are supplied in supporting roles - Sykes is hilariously droll, a classic sidekick, while Elaine Stritch ("Small Time Crooks") displays the real deal in in-law acid as Viola's late husband's mother in the film's last act. Adam Scott ("The Aviator," "Torque") and Annie Parisse ("National Treasure") are likable as Charlie's buds Remy and Morgan and both are fun in one amusing bit of toadying betrayal. Costumer designer Kym Barrett ("Gothika") dresses Fonda like Norma Desmond and puts Charlie in simpler but offbeat outfits that look too expensive for a dogwalker/temp's salary. Production designer Missy Stewart ("Legally Blonde") piles on the florals both indoors and out, with Charlie even adding garden murals to Kevin's streamlined modern kitchen. "Monster-in-Law" is mildly entertaining, but the subject of its titular ogre's rampage just doesn't rate the overkill.