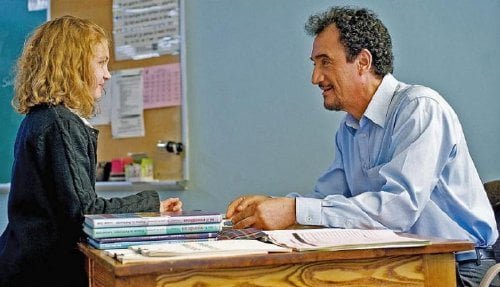 A grade school student, Simon (Emilien Neron), is delivering his class’s daily milk when he comes across a horrific sight – the body of his teacher hanging from a pipe, a suicide victim. Grief and confusion grip the school until the arrival of a stranger who will help the students and teachers heal, “Monsieur Lazhar.”

One ordinary Thursday at a Montreal middle school, 6th grader Simon (Émilien Néron) goes into the building early because its his day to fetch his class's milk. When he arrives at his home room, he finds the door locked. Peering in, he spies a horrifying sight - his teacher, Martine, hanging from a ceiling pipe. With a school, its teachers and administrators all reeling from the tragedy, help arrives from an expected place, an Algerian immigrant with his own secret grief, "Monsieur Lazhar." Writer/director Philippe Falardeau's last film, "It's Not Me, I Swear!," was a terrific and offbeat coming of age tale and yet he still shows growth as a filmmaker with his latest. Adapted from a stage play, "Monsieur Lazhar" is a terribly moving story of healing told with wisdom and humor, both often derived from the cultural clashes at play, but it is also a strong reminder that the people we think we know often have untold stories. Falardeau establishes tension in his opening scenes with the use of sound. Simon runs off to alert an adult. We hear the sound of the kids approaching from outside. We hear and see Simon running back and forth. Finally, a teacher arrives with him just in time to head off the students, directing them outside, but her hands are too full to stop Simon's classmate Alice (Sophie Nélisse) from wriggling through the crowd and looking into the window. We quickly can sense that Alice believes that something Simon did caused their teacher to take her life, but it will take time to reveal just what that was because it will be Bachir Lazhar (Fellag) and his compassion that will draw it out. He arrives unexpectedly in the office of harried principal Mme Vaillancourt (Danielle Proulx), charming her with the common sense he uses to sell himself and bypass protocol. This man is different. His first interaction with his new students, after he has them rearrange Martine's semi-circular desk arrangement into old school straight lines, is to have them take his dictation - from Balzac. His grammar lesson terminology is 'corrected' by Marie-Frédérique (Marie-Ève Beauregard, the only experienced actress among the principle children). Yet clearly the students are beginning to respond, unafraid to interact with their new teacher. Simon even proves a bit of a bully. The school presents a psychologist, Julile Latandresse (Nicole-Sylvie Lagarde), to work with the children, but the suicide is treated with hushed regard. When Bachir assigns his class with a presentation on violence in school, young Alice astonishes, bluntly describing what she saw that Thursday as a type of violence which would have earned its perpetrator demerits. Bachir's favorite student shares his outrage and he gradually becomes more and more outspoken about it. Then we, and only we, learn something astonishing about the man - he's seeking political asylum for threats at home because of another woman's courage to speak out - his wife's - courage that cost her and their two children their lives. When asked by his council (Daniel Gadouas) for their occupations, he states his wife was a teacher and he was a civil servant. The film is rich with parallels, many of them subtle. Bachir observes the charming historical play being staged by drama teacher Claire Lajoie (Brigitte Poupart, "C.R.A.Z.Y.") and comments upon its lack of subjectivity, his perspective rooted in colonialist oppression. But Bachir's diplomatic and gentle nature brings no offense, indeed a smile, and Claire takes an interest in the single man. Alice's judgement of Simon is echoed in Bachir's court struggle and her curiosity about his home country, a land of 'blue and white' is seen is his bright white classroom, a blank slate when compared to the others' colorful adornments. Simon's relationship with Martine becomes a photo negative of Alice's with Bachir. Fellag has created one of the great movie teachers, a quiet man guided by his decency and love of children. His 'unconventional' methods prove cathartic. But the film is practically stolen by young Sophie Nélisse, an actress of such maturity she recalls 'Mad Men's' Kiernan Shipka (both she and Fellag won the Canadian Genie, as did the Oscar nominated film, its director, his adapted screenplay and editing). The entire cast is affecting. Falardeau's entire production is executed masterfully, with its clean production design and cinematography and a simple piano score which evokes school days with nostalgia and innocence.

This was the Canadian entry in the Best Foreign Language Film category at the Oscars this year and, as with the other nominees, represents a very classy selection by the nominating board. This is a very low key film, a school year in the life of Monsieur Lazhar and the children and colleagues about him. After the initial shock of the suicide the film develops a slow steady roll as Lazhar tries to help the children with their grief, especially Simon and Alice (Sophie Nelisse), the only kids to see the body of their beloved teacher, Martine. The low-key nature of “Monsieur Lazhar” should not be confused with being boring. Bachir Lazhar has a back story that is alluded to intriguingly, even though he claims that he has simply been a schoolteacher in Algiers for 19 years. The ambiguity of his past – Lazhar tragically lost his family – adds dimension to the already fully developed performance by Mohamed Fellag as the titular character. Fellag exudes warmth and honesty, and a good dose of sadness, which makes Lazhar a sympathetic person. He cares for all the kids in his class but focuses on Alice and Simon, the children that need his support the most. Writer director Philippe Falardeau creates a thoughtful film that delves into the grief and horror of the tragic event in a Montreal public grade school. He does this with care and shows the sincerity that Lazhar feels toward the children in his charge. This slice of life drama is not going to appeal to those waiting eagerly for “The Avengers” this May. “Monsieur Lazhar” is aimed at the more discerning filmgoer and squarely hits its target.