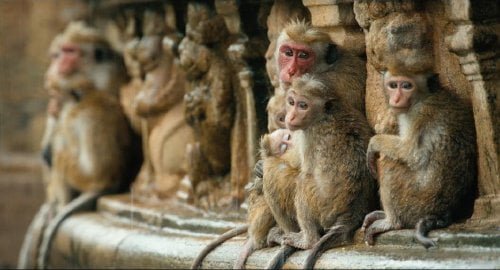 In a Macaque monkey troop living in an abandoned ancient city in Sri Lanka there is a definite social stratum. At the top of the heap are alpha male Raja and his three queens who control the rest with intimidation and violence. At the very bottom is Maya, a loner trying to be accepted by the troop. Things change for her when she gives birth to her son, Kip, and she must make a better life for them both in “Monkey Kingdom.”

Earth Day approaching means it's time for another DisneyNature documentary. Amidst ancient ruins in a Sri Lankan jungle live a thousand toque macaques, monkeys with a distinct social pecking order. At the bottom of the ladder is Maya, an eight year-old female, who thwarts alpha male Raja to romance Kumar, an outsider. Her resulting son, Kip, gets no respect from the tribe royals, but when their home base, Castle Rock, is claimed by another tribe, Maya's resourcefulness will upend the hierarchy of the "Monkey Kingdom." While previous entries in this series have been over-anthropomorphized, defanged and declawed, Mark Linfield & Alastair Fothergill's ("Earth," "Chimpanzee") latest is a winner with an organically spun story set in exotic locations. The macaques are a fascinating bunch with unique traits and characteristics (Maya has a 'blonde' bowl 'cut' while Raja's three 'wives' sport red faces). While the 'Sisterhood' protect their own, those lower on the totem pole must scrounge to survive - the ripest figs go to those literally on top of the tree, while those on the bottom eat unripe, fallen fruit. But when Lex, a battle-scarred macaque who looks like a villain from central casting, ousts Raja, its Maya and her more resilient ilk who fare better when the displaced group travels to an urban village. In the film's most comedic sequence, the macaques descend on a market, raid a chicken coop and feast at a child's birthday party while its celebrants are outside. Nature surprises with its beauty when all animals feast during the annual emergence of termites, Linfield and Fothergill's cameras following monkeys leaping for the swirling insects. There is also some astonishing underwater photography, catching the lower born macaques diving in search of water lily seed pods. The subject monkeys also interact with mongoose, a mother bear and her cubs and their less intelligent brethren, the gray langurs. Predators include leopards and 8 foot long monitor lizards. Incredibly sharp close ups allow us full view of the young Kip (the baby macaque's feet are almost bat-like) while longer range observations accentuate the aging posture of the still active Grandpa. (Hang around for the film's closing credits to watch the filmmakers - and their curious subjects - in action.) Musical choices are amusing, if obvious. The film opens to the theme from 'The Monkees,' Kumar is introduced to 'What a Man.' Tina Fey narrates as if she's reading a bed time story, an initially obtrusive choice which gradually meshes with onscreen action. Grade:

This is the eighth feature to come out of Disneynature and it maintains the tradition that Walt Disney studios began back in the 1950s with films such as “White Wilderness (1958)” and other “Walt Disney True Life Adventures.” “Monkey Kingdom,” narrated by Tina Fey, keeps up the tradition of bringing us into wild, this time to observe the life of a Macaque monkey tribe. The filmmakers (stay for the credits to see what these people went through to document these inventive primates) introduce us to Raja and his tribe. The story is told through the eyes of little Maya and we experience the harrows of being at the bottom of the social ladder and cheer for her resourcefulness, especially on the arrival of Kip, the son of Kumar, a young male Macaque who was driven away by Raja. “Monkey Kingdom” is reminiscent of that terrific Animal Planet series, “Meercat Manor.” Like that program, the filmmakers anthropomorphize the main characters in this story by giving them names and personalities, allowing the viewer to sympathize with Maya and the rest of the tribe, even Raja and his nasty queens. The drama of survival is interspersed with periods of humor, as when the troop are led by returned Kumar and Maya to raid a nearby human city for food, wreaking havoc along the way. Family movie entertainment tends to lean toward the younger members but “Monkey Kingdom” has appeal to young and old alike. The filmmakers bring us to places and creatures we would never see, otherwise, so we get education along with the entertainment Disneynature is giving a portion of the ticket price to support nature conservancy organizations, but only for the first week. So, take the family for a night or afternoon out, see a fascinating film about a slice of nature and help to save the world. That is a pretty good deal.