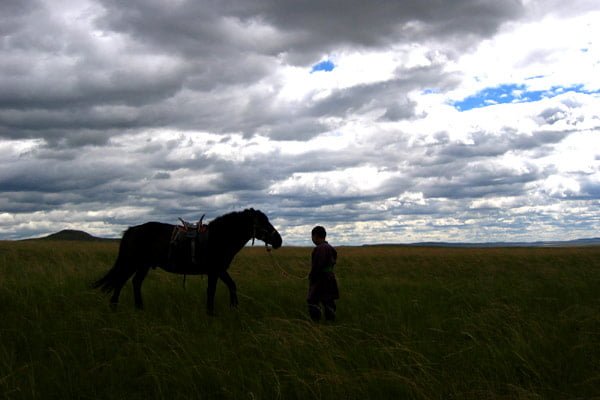 On the remote, vast grasslands of the Mongolian, 10-year old Bilike (Hurichabilike) and his family live a nomadic life and have little contact with the civilized” world. One day, the youngster makes an amazing find when he discovers, floating in a creek, a small and mysterious white sphere. He and his best friends, Dawa (Dawa) and Erguotou (Geliban), set out to solve the mystery and find the source of their prize in “Mongolian Ping Pong.”

Bilike (Hurichabilike) lives an idyllic life with his family and their sheep and horses in the magnificent steppe grasslands of Mongolia. The world comes to them via the occasional traveling entertainment, merchant or photographer's backdrop but when Bilike finds a ping pong ball floating down a stream one day, the mysterious glowing pearl is the first thing that makes him consider venturing out into that world in director Ning Hao's "Mongolian Ping Pong." It is strange how familiar the nomadic Mongolian way of life may seem to adventurous filmgoers, from the Tuvan throat singing of "Genghis Blues" to the round tent homes and elaborate maneuverings for television reception of "The Story of the Weeping Camel." And yet nothing will prepare you for the sheer beauty of this flat, verdant landscape whose horizon seems to stretch out into infinity. Director Ning Hao begins his film by introducing us to Bilike's family as they gather and reconfigure for a series of photographs in front of a rippling backdrop of Tiananmen Square. Then the camera pans right to reveal the vast lands behind them. The traditional and modern are constantly juxtaposed, the youngest family member toddling about in the padded costume of the region while Bilike's friend Dawa (Dawa) sports a Mets cap. Grandmother (Dugema), a tiny woman with a triangular face mostly obscured by huge round eyeglasses, indulges her Jujube habit while working with her hand held spindle. Once Bilike finds his ball, he and his buddies Dawa and Ergoutou (Geliban) are determined to discover just what treasure they have in their possession and so they travel to the holy lamas to seek their wisdom but the priests are as clueless as they. When Bilike's father (Yidexinnaribu) coaxes a TV signal to flicker upon their tube, the boys find out that they hold the 'national ball of China' and believe its missing status must have the nation in a panic and that it is their duty to travel to Beijing to return it. Cinematographer Jie Du captures the beautiful light at every stage of its ever changing qualities and the shape of a rainbow which arcs over the land imitating the curves of the streams which crawl across it. The director favors natural sound after his opening music and closes with a simple, recognizable sound that will bring a smile. Hao's film is full of the type of gentle comedy that delights us with the sight of a truck getting stuck after pulling another out of the mire. If his story sounds like "The Gods Must Be Crazy," where African bushmen marveled over an empty Coke bottle, it bears no resemblance. "Ping Pong" is more about celebrating what one can find in one's own backyard.