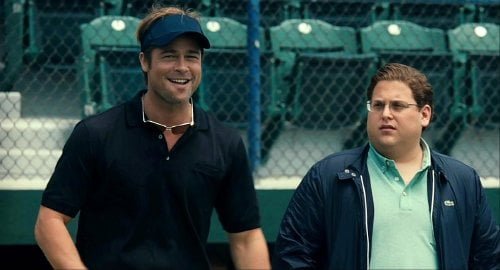 In 2002, former wannabe baseball superstar Billy Beane (Brad Pitt) took on the difficult task of turning the Oakland Athletics from bottom-dwelling last placers to a top-draw team – all on a shoestring budget. With his star players opting to play for the big money teams, he must change the way the game is played, not just on the field but in the head office, too, in “Moneyball.”

At the end of the 2000-2001 season, the Oakland A's lost American League MVP Jason Giambi to the New York Yankees, outfielder Johnny Damon to the Boston Red Sox and Jason Isringhausen to the St. Louis Cardinals. When General Manager Billy Beane (Brad Pitt) went to owner Steve Schott to ask for more money (he had a budget of $38 million to compete against the Yankees' $117 mil) he was told instead to 'think of something.' On a visit to Cleveland, Billy notices Peter Brand (Jonah Hill, "Superbad"), a Yale economics grad working as an overlooked analyst who believes in Bill James's Sabermetrics, the art of winning baseball by crunching stats. Billy hires Pete away from the Indians and rolls the die to play "Moneyball." It may be corny, but it's gotta be said - director Bennett Miller ("Capote"), working with a script by Steven Zaillian ("Schindler's List," "Gangs of New York") and Aaron "The Social Network" Sorkin (based on the Michael Lewis book "Moneyball: The Art of Winning an Unfair Game"), knocks one out of the park with "Moneyball," a smart sports film that's as unique in its approach to the genre as Beane's was to the sport. Here's one that will please both critics and movie goers with a thoroughly engaging, big movie star performance from Brad Pitt that will garner him serious Oscar attention. Baseball has long been an almost spiritual concept for many Americans and "Moneyball" wisely tells Beane's story as one of a personal quest to put a stamp on the game with unorthodox methods. Therefore, it stands to reason that if mathematicians can apply their theories to the natural world, even to the creation of the universe, that a baseball players' statistics could be used to construct a team. Brand (a fictional character representing the group of economic analysts Beane employed) believes that baseball is won not by buying players but by buying runs. And so Beane listens to Brand's recommendations on players overlooked by other teams because they're seen as too old or too odd or too unconventional, but he neglects to bring coach Art Howe (Philip Seymour Hoffman) on board with their way of thinking. Beane never watches games, but Brand is horrified when Howe continues to put Carlos Peña on first base, leaving his and Beane's choice, Scott Hatteberg ('Parks and Recreations'' Chris Pratt), on the bench. Beane's not so behind the scenes when it comes to his daughter Casey (Kerris Dorsey), who lives with her mom (Robin Wright) and mom's wealthy boyfriend (Spike Jonze). Billy deflects all of the new guy's attempts to be part of the family's decision making and encourages his daughter's musical talent (the film's one off note is when Casey sings for dad and the filmmakers choose Lenka's well known 2008 song 'The Show' as if it were Casey's 2002 original - sure the lyrics work well in the context of the film, but it pulls one out of the movie's illusion). Gradually Billy begins to engage with his team more directly, beginning with an awkward pep talk, then forcefully, after he catches one of his new acquisitions, Jeremy brother-of-former-Jason Giambi, larking around after a loss. Beane even overrules Brand, trading Jeremy and Peña to force his objectives. The team begins to win (and went on to set an American League record by winning an unprecedented twenty games in a row). Local media praise Howe. In the end, Beane does exactly what he set out to do, but he predicts how it will all go down as winning that last series game is all that matters to everyone else. "Moneyball" was in the works for a long time, most notably with writer/director Steven Soderbergh, but producer Pitt stuck with it and his instincts paid off. The script is inevitably being compared to that of "The Social Network," and there are parallels, especially with their paradigm shattering protagonists and snappy dialogue (the film's best scene involves Beane and Brand plate spinning a desired trade for Ricardo Rincon), but Beane's story is a more personal one where "Network's" involved group dynamics. After introducing Beane's former wife and daughter, Miller begins a series of flashbacks which show how Billy was one of those storied players - a can't miss superstar as bet on by men who knew the game, except that they were all wrong. It is these two stories working together that get us inside of Beane's head. Brad Pitt has a Robert Redfordesque quality to his shaggy, aging good looks in "Moneyball" and the actor is on a career high this year after his complexly layered dad in "Tree of Life." He's another dad here, and a very different one, more Grace on the inside, nature on the out. His Beane has a Zen quality, especially as regards acceptance of the way things are even after challenging and changing them. Pitt's "Moneyball" has a gossamer connection to Redford's "The Natural," a film which celebrates anything but number crunching but which also exudes a reverence for the game and its myth-making. Jonah Hill is also fine in a dramatic role, using hesitation to great effect as Brand while Hoffman is all about the old boy network one would never have associated with the actor. Pratt looks real on the field and gives Hatteberg the requisite insecurities about his new position in ways both touching and amusing. Red Sox fans get a solid dose of their own team's history, with Brand commenting that losing Damon was good for the A's and an epilogue which features team owner John Henry trying to get Beane on board (on location at Fenway Park) as baseball's highest paid GM two years before the Bambino's Curse was broken (Beane stayed with the A's and has yet to win a championship).