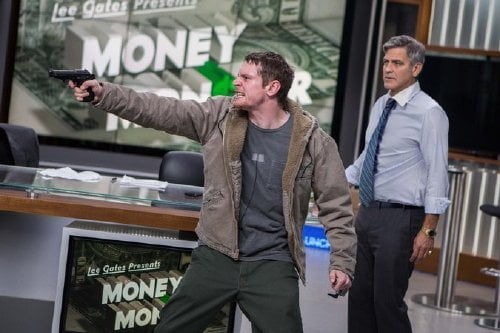 Lee Gates (George Clooney) is the successful host of a TV financial program. He tells his viewers what stocks are hot, encouraging them to buy. One stock he shills, Ibis Clear Capital, had a mysterious loss of $800 million, ruining the lives of many. One victim, Kyle Budwell (Jack O’Connell), takes matters into his own hand and invades the set, armed with a pistol and a bomb vest, of “Money Monster.”

Lee Gates (George Clooney) is a thrice-divorced, hotshot financial television entertainer who begins each broadcast doing a silly, themed bit with two backup dancers. He's currently in a tight spot, his long time director Patty Fenn (Julia Roberts), moving on (although he hasn't gotten the news from her), and one of his long time ballyhooed companies, IBIS Clear Capital, having just lost $800 million due to a 'computer glitch.' Its CEO Walt Camby (Dominic West, Showtime's 'The Affair') is MIA, but COO Diane Lester (Caitriona Balfe, Starz's 'Outlander') is waiting on a feed to appear in his stead when disgruntled delivery man Kyle Budwell (Jack O’Connell, "Unbroken," "'71") holds Gates accountable, taking him hostage on air and strapping a bomb vest to the "Money Monster." Director Jodie Foster's ("Little Man Tate") fourth movie is almost as odd of a duck as her last, "The Beaver." Featuring big stars, but a lumpy script ("We Are Marshall's" Jamie Linden and TV's 'Grimm writers Alan DiFiore & Jim Kouf) and the overall feel of a 90's era commercial thriller, "Money Monster" has the nutritional value of popcorn, its fast pace a diversion from story elements that get lost in its shuffle. Even as she's building to her setup, Foster loses us a bit with Kyle's introduction, the delivery guy seen just offstage a live set for a full minute with nobody doing anything to avoid an on air gaffe. But once the young man's out there, things begin to percolate, Kyle demanding an explanation as to how a fortune beyond his imagining could be lost overnight. Clooney, playing slick with an appealing, underlying sense of failure he undercuts with a propensity for mugging, takes the expected route, Lee empathizing from every angle as Patty cues into his earpiece. Roberts is dynamic, her Fenn in complete command of not only her control room, but the situation, easing non essential crew out of danger as she pushes the ineffective Lester into behind-the-scenes action. The female characters are the strong ones here - Roberts' Fenn, Kyle's pregnant girlfriend Molly (Emily Meade, "Young Adult," stealing the film), Lester (undermined by Balfe's tentative performance) and the assistant, Bree (Condola Rashad, "Sex and the City "), who keeps her ear to the ground. The men are all in over their heads, Gates a puppet, Kyle impulsive, IBIS CFO Avery Goodloe (Dennis Boutsikaris, "Freeheld") unable to check Lester, the police ineffective, producer Ron Sprecher (Christopher Denham, "Argo") kept running about on fool's errands. The film's message is right out of Bernie Sander's playbook, with the rich calling shots the media is all too complacent about accepting on face value, the 'little guy' paying for their failures. Foster's on point dealing with her major characters' interpersonal and professional dynamics, but she flops with the mystery elements of her thriller. She unravels the IBIS crime with rather random introduction of secondary characters around the globe whose contributions make little sense. Foster has now attempted a drama, a comedy, an offbeat Indie and now a commercial thriller without establishing a singular voice. Her latest is a cinematic Tower of Babel with echoes of 'Network,' 'Mad City' and 'Inside Man,' without the coherence of any of them but a clear indication she believes women should be the ones in charge. Grade:

Not nearly as powerful as last year’s “The Big Short,” Jodie Foster’s fourth outing behind a feature film camera is a solid comedic thriller with elements of “Network (1976)” and “Dog Day Afternoon (1075).” George Clooney plays Lee Gates, a showman who dresses in flamboyant costumes and dances with his backup girls while touting stocks. He makes bold promises on these stock prospects, one of which is Ibis. Kyle’s invasion of the studio holds everyone hostage. He threatens to blow up the vest, which he forces Lee to don, and everyone around unless he gets time on TV. The “show” goes nationwide with Kyle asking the question: why? Scared witless, Lee must depend on his cool headed producer, Patty Fenn (Julia Roberts) who remains in the studio after the police arrive and keeps Lee from making a mistake that could kill them all. The story, by Alan DiFiore, Jim Kouf and Jamie Linden, is quickly paced and works pretty well when the action is in the studio. There are some missteps, like Lee ordering his assistant, Ron (Christopher Denham) to test out a new erectile cream approved by the FDA and report the results. Things work best when Patty is in the picture. Roberts embraces the idea of a strong-willed, intelligent woman who can keep control in the worst situation – which this is. Clooney does not stretch his acting muscles with his portrayal of Lee but he does embody a man whose success is made possible with the help of people like Patty and her studio crew. Jack O’Connell is effective as a man who lost it all and demands answers with the point of his gun. One priceless moment that pulls you one way then takes a hard left turn when Kyle’s pregnant girlfriend, Mollie (an inspired little performance by Emily Meade), actually steals the show a la “Dog Day,” giving “Money Monster” its best comedy moment. The whole mystery about the missing $800 million is kind of a maguffin whose resolution is a let down in the end. Things work best for the first three quarters of “Money Monster.”