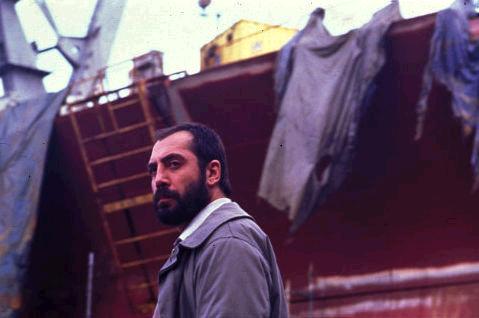 A shipyard in a coastal town of northwestern Spain begins to close and a group of friends are both divided and united. Santa (Javier Bardem, "The Dancer Upstairs"), Jose (Luis Tosar), Lino (José Ángel Egido, "Open Your Eyes"), and Amador (Celso Bugallo, "Butterfly's Tongue") each gather at the bar of their former coworker Rico (Joaquín Climent, "Goya in Bordeaux") when they're not spending their "Mondays in the Sun."

Director Fernando León de Aranda's (who also cowrote with Ignacio del Moral) film won the Golden Seashell at the 2002 San Sebastian film festival, scooped up a bunch of Goyas (Spanish Academy Awards) and, mostly notably, was chosen by Spain as its 2002 Foreign Language Oscar submission over internationally known Pedro Almodóvar's "Talk to Her." This bittersweet character study of a group of men reacting to the loss of livelihood is probably what "The Full Monty" would have been like if they hadn't decided to put on a show. Santa is a rakish charmer who rages against the establishment with petty crimes. He bullies his buddy on the ferry into ignoring his lack of ticket and is fighting a demand of 8000 pesetas (about the cost of two rounds) for breaking a street lamp during the shipyard's lockout riot in court. Santa scams his existence any way he can without seriously looking for work, sleeps around and flirts with Rico's 15 year old daughter Nata (Aida Folch), but for all his faults Santa is loyal and watches out for his friends. Jose is distressed watching his wife Ana (Nieve de Medina, "El Bola") come home tired and achy from a demeaning job at a fish cannery. Jose equates not being the breadwinner with being less of a man and begins a downslide when he suspects his wife may have begun an affair. Lino, the eldest of the group, is the most determined to procure a new job. He responds to ads clearly looking for younger men with skills he doesn't have, although he's taking home computer lessons from his son. Amador sits silently drinking at the end of the bar, barely putting up with his friends' ribbing about his wife leaving him. When Amador gets particularly drunk one night, Santa takes him home and gets a shocking eye-opener. The film ambles along alternating social commentary with comedy while digging deeper into its characters' psyches. The group seems both youthful and pathetic when they watch a soccer match from an illicit obstructed view granted as a favor from Reina (Enrique Villén, "The Day of the Beast"), who has found work as a 'security technician.' Santa's is irreverently entertaining making lewd comments in line at the unemployment office or scarfing down free samples at the supermarket, but never so funny as when, having taken over a babysitting job for Nata, he reads a bedtime story to a little boy. At the conclusion of "The Ant and the Grasshopper" Santa declares the ant 'a shit and a speculator!' with righteous fury. The film concludes with one tragedy averted by another and is capped off with a group escapade that recalls the ending of Blake Edwards' "S.O.B." De Aranda shapes his film from the outside in, attaining a real sense of time and place. He opens with footage of rioting, then steps back to let his actors create a tapestry of the aftermath. Bardem is terrific, a big bellowing bear with surprisingly adept insight. His subtle, unspoken observations and the gentle correctives he makes betray a tenderness beneath the bluster. The ensemble cast all do their part, with Tosar and his building desperation a standout. Cinematographer Alfredo F. Mayo ("Burnt Money") presents the city in the cold, gray light of day, only allowing the sun to really sparkle on the water at film's end. Art Direction by Julio Esteban gives us the blue collar heart of the city, bypassing any tourist viewpoints. Original music by Lucio Godoy ("Intacto") strays into the manipulative, the only unfortunate choice for this contemplative film. Santa, adrift on a ferry in the bay, utters the film's last line - 'What day is it?' as Monday morning commuters gather on the dock. "Mondays in the Sun" is a funny and compassionate tribute to the unemployed.