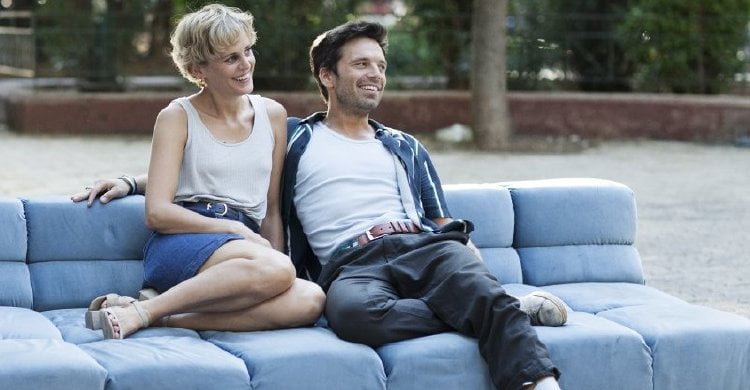 It’s Friday night in Athens and Argyris (Giorgos Pyrpasopoulos, "Chevalier") points his American friend Mickey (Sebastian Stan) towards another American, Chloe (Denise Gough, "Colette"), at a party.  Their sexual chemistry is so strong, they awaken nude on a beach the next day.  After introducing themselves handcuffed in the back seat of a police car, Chloe is so impressed by Mickey’s chivalry and so besotted by their attraction, she abandons her plans to return to the States the next day, but after six months of partying like it’s always the weekend, the couple eventually has to face the reality of “Monday.”

Cowriter (with "Gretel & Hansel's" Rob Hayes)/director Argyris Papadimitropoulos aimed to make a romcom with consequences but he’s forgotten the most important element – a couple worth rooting for.  These thirtysomethings’ juvenile behavior is enough to give you a hangover and Chloe, in particular, can be awfully grating.  Take, for example, her insistence on keeping a couch there is not only no room for in Mickey’s apartment but one that is impossible to maneuver up his stairs, a situation Papadimitropoulos milks for what seems like an eternity.  That she suggests her belongings warrant seizing some of the space Mickey’s kept for his 6 year-old son is as selfish as his ultimate solution of setting the (presumably pricey) couch ablaze, despite both of them treating the outdoor bonfire as a lark.   (It will also be the second of three episodes where their behavior warrants police intervention.)

The hum drum aspects of life begin to wear on the relationship as they both work from home.  Mickey, a DJ who also works on advertising music, exhibits no client skills whatsoever, picking an argument that overwhelms the conversation Chloe, an immigration lawyer, is trying to have with her own client in the next room.  Acting with equal professionalism, she simply throws in the towel, sending the confused man who’d come to her for help packing.  This is, in part, because she discovered he’d been referred by Christos (Andreas Konstantinou), her former wealthy Greek boyfriend who’d ghosted her the night she met Mickey.  At one point, all three attend a wedding, Mickey’s jealousy causing him to drunkenly commandeer the wedding band’s microphone.  Chloe also gets an opportunity to wonder about her lover’s past when his former bandmate Bastian (Dominique Tipper, "The Girl with All the Gifts") visits and the two of them hole up in the bathroom to snort coke.  Mickey also generously begs out of meeting with his son’s mother, Aspa (Elli Tringou), convincing Chloe that it will be better if she faces the awkward situation alone.

Just what is Papadimitropoulos trying to accomplish here?  Granted, the early part of the relationship is somewhat amusing and his un-touristy shooting of Athens and the island of Antiparos makes for an exotic backdrop, yet even here he features lovemaking on a pebbly beach that hardly looks conducive to pleasure.  After his insane ‘let’s-recapture-the-early-magic-of-our-relationship’ climax (yes, one that features the third appearance of the police, this time en masse), he finally gets to his point with his last shot – and it is a 6 year-old boy who will suffer the consequences.

If “Monday” makes any point at all, it is that sexual attraction does not a relationship make.