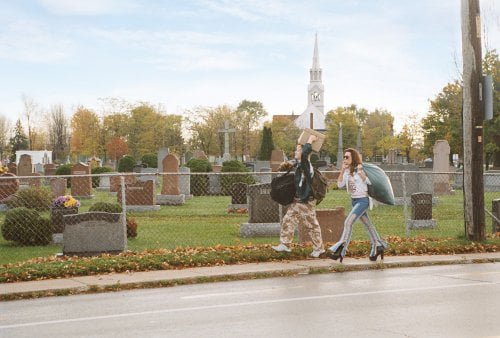 When she goes to pick up her son at a correctional facility, Diane 'Die' Després (Anne Dorval, "I Killed My Mother") is unphased that the flooded hallways she must walk through as the result of a fire her 15 year-old set. But the tattooed, gum snapping, skunk-streaked Die is soon reminded why Steve (Antoine-Olivier Pilon) was in there to begin with as she backpedals from the scolding that's set off his violent ADHD after he stole her a name necklace emblazoned "Mommy."

When he was just twenty, writer/editor/director Xavier Dolan burst onto the scene in a big way with his first film, "I Killed My Mother," in which he played a teenager who resented his mom's every move. Now, five years later, he's found Pilon as (an exaggerated?) stand-in to honor unconditional maternal love in a bravura film which won the Cannes Grand Jury prize. The 139 minute movie never lags, by turns exhilarating and exhausting. Dolan begins with some futuristic title cards which explain that a fictional Canadian government has passed a bill containing the controversial W/S-14 law which allows a parent to commit a child with no further legal review. Then he cuts to Die, his flailing, inappropriate mother, moments before she gets into a car accident, gashing her forehead. Die, in her white denim jacket, skin tight jeans and sky high heels marches Steve to her latest abode in a Montreal suburb as new neighbors watch warily. At first, everything's a lovefest, but the next morning Steve makes a racist attack on their taxi driver and Die, now forty minutes late to work, loses her job. Things look up when Kyla (Suzanne Clément, "I Killed My Mother"), a schoolteacher on leave who lives across the street, begins to spend more time with the Després duo than her own family. Kyla's like a photo negative of Die, conservative, quiet and clearly troubled (she's hampered by a bad stutter), yet she provides friendship and support, two things which may be lacking in her own life. Die clearly loves her out-of-control son, who can be immensely charming. They're both sexually magnetic, Steve busting his moves on a skateboard when not making moves on Kyla, Die having caught the eye of Paul (Patrick Huard, "Starbuck"), a lawyer who lives nearby. Just when Die thinks she's on firmer ground with a freelance gig, she's informed that the parents of the child who was burned in the fire Steve set are suing, but her attempt to use her charms to get Paul's help is scuttled by her son and she's backed into a corner, forced to make the move Dolan foretold at film's beginning. Dorval and Pilon are both simply great here, raw and charismatic and defiant, the actors both putting on big fronts to hide their characters's fears. Pilon also exudes danger, the young actor able to flip good humor to rage in an instant. Clément, whose back story is merely hinted at, neatly fits into this triangle where three damaged souls just about create one whole one. With the Academic ratio having been used recently in both "Ida" and "Listen Up Philip," Dolan goes with an even more severe 1:1 crop, caging his subjects while drawing us into them (the film goes widescreen in a couple of instances where Die fantasizes about a more normal life, including her grown up son's wedding). The director plunges us into the experience with his camera work, cutting and use of music ('Wonderwall' hasn't sounded this fresh in years). Grade: