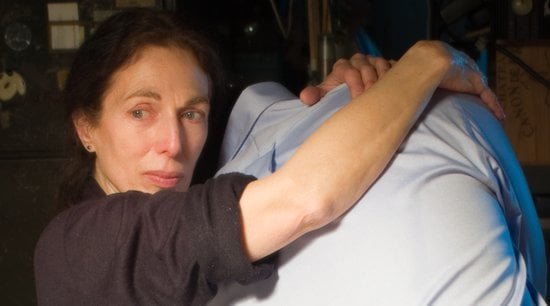 Mikey (Matt Boren) arrives at his parents' doorstep with a lame excuse for the visit. He asks to stay a short while and Mom (Flo Jacobs) and Dad (Ken Jacobs), especially Mom, open their arms to the prodigal son come home. Things are not what they seem, though, and Mikey's life at home is not running as smoothly as he claims it to be in "Momma's Man."

When Mikey (Matt Boren) returns to his parents' Manhattan apartment, we suspect his story about a delayed plane flight may not be true. As Mikey reverts to his childhood, avoiding his wife Laura (Dana Varon), their newborn and his job back in California, a one day delay turns into another and another in "Momma's Man." In his third feature, writer/director Azazel Jacobs has taken the currently popular character of the arrested adolescent male but has not given him the usual comedy treatment. This independent film has a slow and deliberate build into a profoundly moving experience. That the filmmaker has cast his own parents, experimental filmmaker Ken Jacobs and his wife Flo, as Mikey's parents and filmed most of the action in their actual apartment gives the film many more layers of dimension. At first, Mikey comes across as vaguely annoying and pathetic. Hanging around in his underwear, he goes through boxes of childhood belongs (the Jacobs's loft apartment is a cluttered storehouse, an amazing reflection of its inhabitants), singing horrid hate songs to an ex-girlfriend he finds in a notebook like it still mattered, reading comic books and lying about the long-distance work he isn't doing. He makes half-hearted attempts to contact the airlines while making excuses to his wife on the phone ('Have you ever watched your parents age?' is Mikey's first excuse to Laura, but when Mom begs him to visit with them, he begins to avoid them). When some teenagers ask him to buy them beer, he hangs around afterwards, waiting to be invited to join them. A visit to boyhood buddy Dante (Piero Arcilesi) gives us an equally immature individual. But just when the film seems about to disengage us observing Mikey's morose return to the womb, something startling begins to happen. Mom and Dad begin to come more and more into focus as separate entities. We see them looking at one of Dad's films, a mesmerizing study in light. Dad, who says next to nothing, expresses a lot with his silence. We just know he disapproves of what Mikey's doing (in one scene, he winds up a headless, crawling baby toy and sends it across the table toward his son). Mom, on the other hand, is the typical nurturer, always trying to provide food or drink (this is comically stated at the outset by the instructional note she leaves Mikey to prepare his breakfast cereal). It's Mom who begins to voice the worry that something is wrong. Mikey accuses his parents of intervention. The film's first climax, though, has nothing to do with Mikey. We view Dad's second film, another study in light. Jacobs cuts from the film to his parents watching it, bathed in the same sepia-toned light as Dad's film and it is clear the son is paying homage to the father. The scene literally took my breath away. The emotional build increases with the father's silent, initially hidden observation of Mikey lying through evasion, then orchestrating a pitifully obvious cry for help. A visit to meet that old girlfriend, Bridget, finally brings home some hard truths. Momma's silent comfort is finally what gives Mikey the strength to pick up and go on. Cinematography by Tobias Datum is notable, not only for his cold capture of a New York City winter in exteriors, but for his dark interior lighting of the Jacobs's amazing apartment, where chairs and bags of plastic cups are pegged on walls and masks, babydoll heads and wind up toys are decoration, that gives visual representation of Mikey's cocooning. The logistical challenges alone of shooting in such a cramped environment must have been daunting. "Momma's Man" demands some patience in its early goings, but the payoffs are well worth the effort. Jacobs's film is an artistic three-way character study, a unique portrait of an American family.

Writer-helmer Azazel Jacobs (son of Flo and Ken) starts off slowly, almost boringly, as we watch pathetic loser Mikey meander around his parents' incredible apartment that contains every vestige of Mom and Dad's life and his childhood. As the second half plays out, "Momma's Man" becomes an often-funny character study of a true schlemiel. The title character has come back to the womb and lies about his motives. He needs his momma and his momma needs him. Jacobs elicits interesting, minimalist performances from his small band of 'actors.' In this three-hander, Matt Boren gives the right turn to his character Mikey. You do not like him but you feel for him anyway, despite his continuous lies. Mom and Dad give very different perfs with Ken Jacobs a man of few words but with an intensity of expression that is riveting to watch. Flo Jacos is amateur with her line readings but develops a character that is a dead ringer in manner to my own mother and mother-in-law. Mom is always asking Mikey, to his moldering exasperation, if she can get him a sandwich…No…tea…No…coffee...No…some cake…No….breakfast…No…lunch…No…dinner?...NO! Just like my mom. . Minimalist is the word, too, for the behind camera effort. Lenser Tobias Datum uses the darkness and light of Flo and Ken's cluttered, ordered apartment that abounds with props, gadgets and paraphernalia of their life that blends perfectly with the director's story.