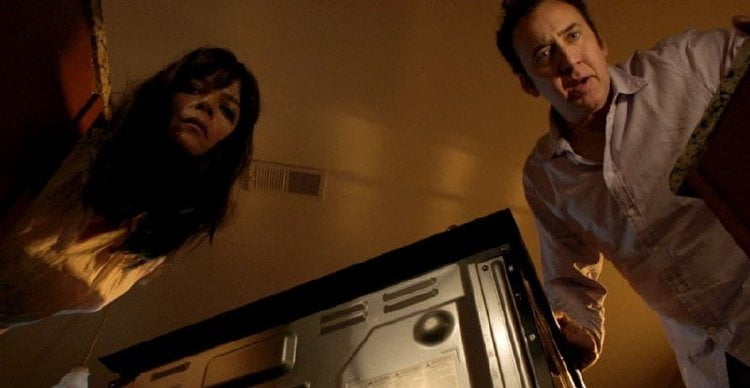 The Ryan clan is the quintessential American family, or so it seems. But, Dad (Nicolas Cage) never fulfilled his dreams. Mom (Selma Blair), tired of being a stay-at-home mother, wants to go back to work. And the kids, Carly (Anne Winters) and Josh (Zachary Arthur), are, well, kids. Then, something unexplained grips all the parents in town and they go on a murderous rampage – killing their own children! – in “Mom and Dad.”

The Ryans are your pretty typical American family, dad Brent (Nicolas Cage) yearning for his own space while exhausted mom Kendall (Selma Blair) so believes in family the word itself is the central component of her decorating theme. They have the usual fractious and distracted relationships with high school sophomore Carly (Anne Winters, TV's 'Tyrant'), whose black boyfriend is diverting her attention and getting under dad's white skin, and pre-teener Josh (Zackary Arthur, "The Fifth Wave," TV's 'Transparent') who could show a little more respect for his elders. But Kendall's dream of loving family life turns into a nightmare when something infects ever parent, turning their protective urge into a murderous one in writer/director Brian Taylor's ("Crank," "Ghost Rider: Spirit of Vengeance") "Mom and Dad." One wonders why this feature isn't getting a theatrical release, as this bonkers cult-movie-in-the-making is a lot more enjoyable and more well made than most horror outings that do. Taylor's film is not only successful alternately delivering real tension and stress-releasing belly laughs, but has something to say about how traumatic events can promote unity and bring out the best in people. Cage and Blair are one dynamic duo, he blasting off into full-on patented Cage lunacy while she keeps things grounded with a more realistically emotional, conflicted performance. Taylor sets his tone with a pre-credit prologue. A young mother appears to be checking her child safely ensconced in her back seat. But then she gets out of her car and we see it is parked across train tracks with a locomotive bearing down. The credit title sequence which follows is a retro ode to 1970's B movies set to 'Yesterday When I Was Young,' a theme for more innocent, untroubled times in the Ryan household. When we meet them, Brent and Kendall are dealing with the weekday morning rush and the negative response from their kids about their presence at dinner that night with Brent's parents. Daniel Pearl's ("The Boy") camera work and the deft editing of Rose Coor and Fernando Villena make a game of tickle between father and son initially a foreboding of violence to come, but when Josh bops dad off the back of the head with a ball, Cage's look could kill before it vanishes into 'good-hearted' laughter. Sound also adds to the tension, the Ryans' Chinese housekeeper loudly and rhythmically chopping at a kitchen cutting board. At school, Carly's attention is drawn to a strange scene outside her classroom window. A parent is being tackled by school security. As school is let out, things become more disturbing. Kids are being attacked by those parents not held back by the fence they gather at like a horde of zombies. Carly finds her boyfriend Damon (Robert T. Cunningham in his acting debut), the two quickly acting to find and protect Josh. By the time the three make it back to the Ryan household, they'll find that housekeeper mopping up a bloody kitchen floor, her daughter Lisa nowhere to be found. Meanwhile, Kendall's received the phone call that her sister Jeanne (Rachel Melvin, "Dumb and Dumber To") is finally in labor and rushes to the hospital. Taylor's loaded his screenplay with multi-generational conflicts, springing them on us in increasingly explosive scenes. We've never seen new fathers viewing a maternity ward's newborns quite like this. Flashbacks are scattered throughout, Brent's outlining his pent up rage (in one, he takes a sledgehammer to the basement pool table that was to be his refuge while singing the 'Hokey Pokey'), Kendall's her lost, loving relationship with her daughter. But although Kendall's witnessed the ongoing parental insanity with her own sister, she ignores radio warnings to stay away from your children on the same afternoon Brent comes home early for some fun and games with a meat tenderizer, Sawzall, coat hanger, one ingenious booby trap and Brent's mom (Marilyn Dodds Frank) and dad (Lance Henriksen). The action is beautifully staged, but Taylor really excels sprinkling the comedy element into the horror, getting a laugh from a door bell, serious bodily harm falling on both sides of the genre. He leaves us with a family shaken, but perhaps stronger. "Mom and Dad" is a streaming gem. Grade:

I watched the theatrical trailer for “Mom and Dad” and my first thought was, “This looks whacked!” Then, I saw the movie. I stand by my original thought – it is whacked! And I mean that in a very good way, indeed. Writer-director Brian Taylor (previously known as “Taylor”) takes the idea of parental mayhem and explodes it. Everything, on the surface in the sleepy town, is idyllic until the moms and dads start behaving weirdly violent, but only toward their own kids. At first, the sickness appears to only affect a few parents. But, when the violence escalates to the school attended by Carly and Josh, the principal orders an evacuation. The problem is, all the moms and dads are waiting for their children and it is not to bring them milk and cookies. Brian Taylor’s story takes the premise of parental mass hysteria and fractures it between the darkly funny mayhem in general and the Ryan family, In particular. As the murderous spree in town takes hold, the focus becomes Carly and Josh’s fight to survive in the house that was, once, their home. Now, they face a trial of wits and survival against their previously loving mother and father. Nic Cage, in an outrageous role he is made for, and Selma Blair, who embraces her conflicted character of loving mom and enraged killer, lead a large cast of killers, victims and survivors. Their kids Carly and Josh are well played by Anne Winters and Zachary Arthur and stand equal to their elders as the battle of wits leans in favor of the kids. At just 84 minutes. “Mom and Dad” is tightly paced. imaginatively written and very funny, in a dark, dark way. Be aware that the mayhem may not be for everyone but fans of black comedy satire will have a ball.