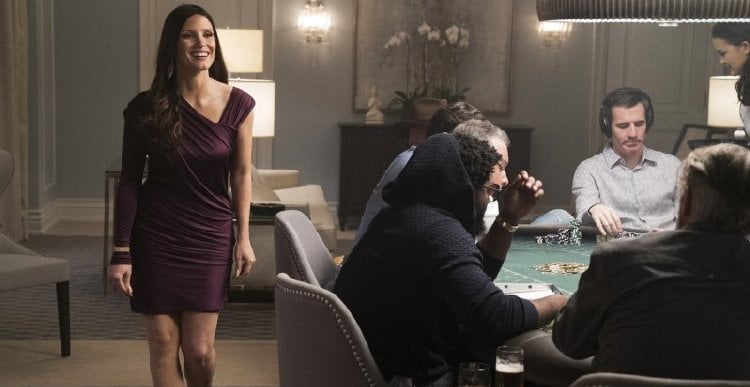 Molly Bloom (Jessica Chastain) battled childhood afflictions that should have kept her from her dreams to be an Olympic skiing champion. During a crucial competition, a freak accident that destroyed those dreams led her to the world of high-stakes poker where she ran “Molly’s Game.”

Screenwriter Aaron Sorkin's ("The Social Network") directorial debut left me somewhat cold. The story of Molly Bloom, brought up by a demanding, perfectionist dad (Kevin Costner, best in show here) to become an Olympic skiing hopeful brought down by a fateful twig lodged on her course before remaking herself as a high stakes poker entrepreneur, is a fascinating one. Unfortunately, Sorkin fails to make us care about any of the principals, Jessica Chastain's brittle performance harkening back to last year's "Miss Sloane." Sorkin's rhythms and beats flow right into the power plays and bluffs of the sharks and whales at Molly's game table, but outside of the game, his dialogue frequently falls into Hollywood cliche. Chastain propels his copious narration as she charts Molly's early life and subsequent hustle, but the present day scenes between Molly and lawyer Charlie Jaffey (Idris Elba) which punctuate the film, shading in Molly's moral compass, stall. "Molly's Game" is at its best around the poker table, defining the characters (Michael Cera's vindictive Tobey Maguire stand-in, Chris O'Dowd's sad drunk and Bill Camp's pitiful addict) who Molly later seeks to protect when she's when she's indicted for her role in an international illegal gambling operation run by the Russian mob. Grade:

“Clinical” is the word that comes to mind for uber-scripter Aaron Sorkin’s first foray behind the lens at its helm. Molly’s is a riches to rags to riches to rags to riches story about a young woman whose life was changed by a single, misplaced twig. Her hopes for Olympic gold were dashed. But, Molly is a smart young woman and she moves to LA to find a new and different life. She lands a waitress job a swanky club run by Dean Keith (Jeremy Strong). The savvy, intelligent waitress becomes Dean’s assistant and, soon after, he asks her to host a big stakes poker game for celebrity high-rollers. This begins a meteoric career where her games are held in the best hotels in Las Vegas and LA with entry fees north of $100000. The attraction of her famous, secret games takes on a more sinister tone when a down on his luck colleague, Douglas Downey (Chris O’Dowd), introduces the Russian Mafia into the games. This bad decision on Molly’s part to let the mobsters in attracts the FBI and the lucrative life as Molly Bloom knows it comes to an end. Sorkin’s adaptation of Bloom’s names-names best-seller, Molly’s Game: From Hollywood’s Elite to Wall Street’s Billionaire Boys Club, My High-Stakes Adventure in the World of Underground Poker, brings us into a world not seen by us normal folk who do not play the game. Aside from a tutorial on poker jargon, we live in the celebrity poker world where the celebs, such as Player X (Michael Cera, who may be a stand in for Tobey Maguire in real life), spend their hard earned cash for the honor to be invited to Molly’s game. The story divides between the steady rise of Molly to the role of Poker Princess, pulling in millions, to the RICO suspect who could go to prison for a decade and owe millions to the Feds. Idris Elba comes on the scene as Charlie Jaffey, the lawyer she hires to take on her defense in the courts. Kevin Costner gets the most sympathy, more than cold-as-ice Molly, as her father, Larry. He disapproves of her career but, damn, does he stand beside her when she needs it most. Jessica Chastain, who I greatly respect as an actor, seems in a rut with her alike performances in “Miss Sloane (2016)” and “Molly’s Game.” I hope that she does not become type cast as a cool-hearted ambitious and sharp woman battling a man’s world – though she does it so well. Aaron Sorkin, as fledgling director, mires himself in his story rather than what is on the screen, which may be the reason that Chastain does not “own” the movie.