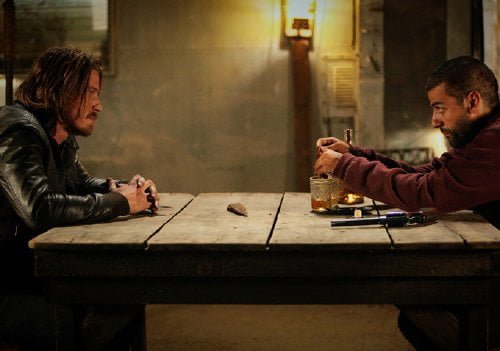 Thomas (Garrett Hedlund) is a successful filmmaker but problems with family and finances force him to take new stock in his life. He drives off alone into the desert to clear his head by consuming lots of alcohol, blows a tire and flips his jeep on its side. He has to walk out of the arid land and, while camping one night, a stranger (Oscar Isaac) walks in from the dark and Thomas senses evil in “Mojave.”

Thomas (Garrett Hedlund, "Unbroken," "Pan") is a Hollywood filmmaker wondering what he wants after he's gotten everything. Famous since nineteen years of age, the handsome hedonist leaves his latest star Milly (Louise Bourgoin, "Miss and the Doctors") in his bed as his answering machine records pleas as to his whereabouts and heads out for some soul searching in "Mojave." It's difficult to know just how serious writer/director William Monahan ("London Boulevard," writer, "The Departed") is with this heavily symbolic cat and mouse game that wears its existentialism on its sleeve, but the end result is a hoot. Hedlund is an oh-so-serious man bun howling back at wolves when he runs into the Mansonesque Jack (Oscar Isaac, "Star Wars: The Force Awakens"), an eloquent desert dweller who informs him 'I'm into motiveless malignancy. I'm a Shakespeare man.' Thomas finds Jack helping himself to his coffee at his campfire, a rifle at his side. If the allusions to Jesus's forty days and nights in the desert being tempted by Satan were not already obvious via Hedlund's blond locks and beard versus Isaac's darkness and slippery tongue, it comes up in conversation (Hedlund also later retreats to a motel room, number 166). Jack taunts Thomas with what haunts him, 'to be or not to be,' and when asked what he does replies 'I fall on travellers.' He claims to be just kidding, but Thomas has been spooked and after making a successful lunge for Jack's gun, hides out in a cave. But the next morning's sun obscures the identity of the man standing at its entrance and Thomas shoots, killing a Mexican deputy. Jack's witnessed everything. Thomas begins to make his way back to L.A., reporting his overturned production Jeep to his office and requesting a car pick him up. A local newspaper notes six area slayings which may be connected, matching the notches on Jack's rifle butt. Thomas returns home, and after watching Stroheim's "Greed," decides to secure the slain cop's gun in the base of his television. Meanwhile, back in the desert, Thomas has come across the wrecked Jeep and found its registration with Thomas's address. If the eternal question and religious overtones weren't enough, the film can also be seen on socioeconomic turns, Jack's high IQ homelessness pitted against Thomas's easily acquired wealth. The men surrounding Thomas are comprised of almost faceless worker bees and the comically excessive likes of Norman (Mark Wahlberg), the partner always seen in black socks and robe accessorized with hookers and Chinese takeout, and Jim (Walton Goggins, "The Hateful Eight"), his deadpan, unflappable agent. Milly is a ghostlike object of desire haunting his house, a wife and daughter (Kylie Rogers, TV's 'The Whispers') away in England. One could almost begin to wonder if Jack were a figment of Thomas's imagination were it not for the innocent bystanders caught in their escalating, dangerous game. The final showdown back in Mojave is over the top, Jack giving voice to the early setbacks which shaped his course, all wrapped up in his original song 'Elsinore' ('my mother was a whore' - dual Manson references). But Monahan provides such a sentimental answer to Thomas's question it raises that question again - is he serious? No matter, "Mojave" has all the earmarks of a cult film in the making. Grade:

Writer-director William Monahan creates a psychological thriller that works on several levels. It is an allegory of Christ’s 40 days in the desert and his battle with the devil. It is a cat and mouse game with the roles of cat and mouse always in flux. It is a story of duality with Thomas and the stranger, Jack, two sides of the same coin. It is also a theological treatise on good and evil, so there is a lot going on here. Casting is spot on with Garrett Hedlund the strong silent type willing to take matters into his own hands. Oscar Isaac is amusing and terrifying, sometimes at the same time, as the mysterious and murderous stranger who is an unrelenting monster. The inevitable showdown that you know will happen is built up to with skill and keeps you guessing. The supporting cast is small but each creates their own niche in the tapestry of the story. Walter Goggins, as Thomas’s lawyer, is amusing as he channels Jack Nicholson, including the ever present sunglasses. Louise Bourgoin, as Thomas’s French actress girlfriend Mill, is coolly aloof and glamorous, making an encounter she has with Jack both chilling and amusing. But, it is Mark Wahlberg, as Thomas’s nutty producer, Norman, who steals his scenes with his foul mouth bluster, faces his financial problems with prostitutes and Chinese food Writer Monahan crafts a clever thriller that keeps you intrigued and Oscar Isaac, as the chatty and philosophical Jack, gets some of the film’s best soliloquies. There are extended interludes with Thomas and Jack quietly talking about life and death and good and evil but I hung onto every word and relished the intelligence and humor of the writing. I like it when a film joins mayhem and humor and balances it evenly.