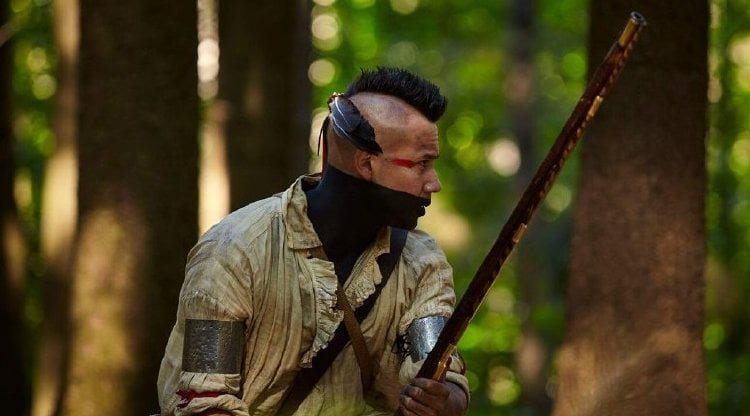 During the War of 1812, a group of American soldiers are bent on revenge against the Mohawk tribe in the upstate New York wilderness. One young woman, named Oak (Kaniehtilo Horn) and her two lovers must fight back against the hostile intruders in “Mohawk.”

During the British American War of 1812, the Mohawk remained neutral. British soldier Joshua Pinsmail (Eamon Farren, "Twin Peaks: The Return") has romantically inserted himself between Calvin Two Rivers (Justin Rain, TV's 'Fear the Walking Dead') and his squaw Oak (Kaniehtiio Horn, "On the Road"), trying to convince both to turn on the Americans who have been collecting their scalps. When Calvin attacks an American outpost, leaving all its soldiers dead, an American Colonel leads a group to find the perpetrator and bring him back to Fort George in "Mohawk." Cowriter (with Grady Hendrix)/director Ted Geoghegan's second movie is not a horror film, but shares a commonality with his first, "We Are Still Here," in burnt bodies and soot-smeared faces. This period piece has horrors of its own and flirts with the supernatural of Indian mythology, but its strongest assets are the strong (with one exception) characterizations crafted by its cast and its natural forest setting. 'This Britisher only wants to use your bodies to protect him from American rifles,' warns Oak's mother Wentahawi (Sheri Foster, TV's 'Unbreakable Kimmy Schmidt'), obviously disdainful of the love triangle that has formed with the outsider. Oak is horrified when Calvin returns boasting of his kills, followed by the troops who quickly dispatch both her mother and her uncle. The colonel is also fatally wounded, leaving his captain, the far more ruthless Hezekiah Holt (Ezra Buzzington, "The Artist"), in command. This initial setup is the film's shakiest aspect, Foster's modern intonations yanking us out of Geoghegan's period piece, but once his trio is on the run, "Mohawk" never lets up. Captain Holt promotes himself to Colonel, his agenda clearly driven by bloodlust. When Calvin is captured, Holt's son Myles (Ian Colletti, Arseface on AMC's 'Preacher') is reluctant to follow dad's orders to torture him, but he never has to make that decision, Pinsmail's clean head shot splattering the Captain with his blood. At this point, Holt's remaining three - one-eyed tracker Sherwood Beal (Robert Longstreet, "Take Shelter"), bearded Lachlan Allsopp (Jonathan Huber, the WWE's Luke Harper) and pacifist dandified translator Yancy (Noah Segan, "Looper") - all wish to return to Fort George, but Holt is now hell bent on revenge. Meanwhile Oak's begun to dream of a horse skull warrior shrouded in fog - or is it smoke? - and her words about the blood soaking into the ground from too much death making the forest to go mad appear to be prophetic. Geoghegan doesn't spoon feed his audience, allowing us to figure out true alliances and betrayals by the behaviors of his well cast ensemble. He and cinematographer Karim Hussain ("We Are Still Here") use their location well, natural splendor a means of cover or cause of disorientation. Practical effects are gruesomely effective, costume and makeup artful. Wojciech Golczewski's ("We Are Still Here") percussive electronic score evokes the drums of both sides of the conflict. If you're looking for something a bit different, "Mohawk" has a lot to offer. Grade: